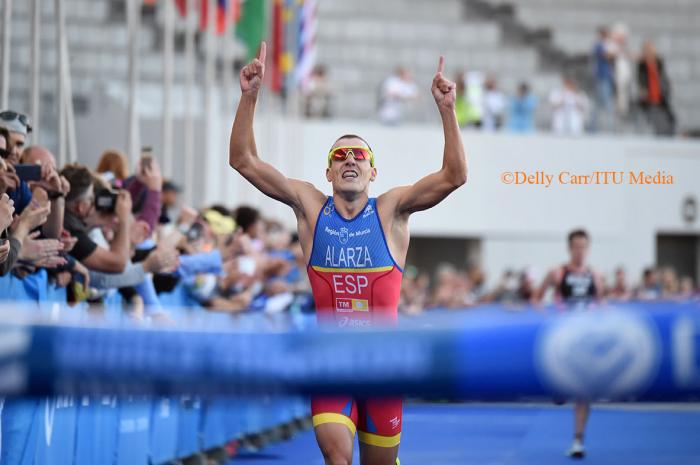 It was a day of firsts in the elite men’s race, as Spaniard Fernando Alarza earned his first-ever career World Triathlon Series win at the Discovery World Triathlon Cape Town on Sunday.

Showing no sign of weakness over the entire five-kilometre run, Alarza’s victory meant the WTS circuit remains dominated by the Spaniards as Cape Town becomes the third consecutive race to be won by Spain this year.

Excited to finally reach the top of the podium, Alarza said, “A sprint distance is good for me. I think I had the best race of my life. I am so happy because now I think I qualify for Rio finally. I am now going to train hard for Rio. Today was amazing, I was very motivated. Today I was just very good and feeling good. It was a very strong run.”

Improving one position from his bronze in Gold Coast, Great Britain’s Jonathan Brownlee captured the silver medal, while the bronze went to France’s Dorain Coninx, who also stepped on the WTS podium for the first time.

Brownlee said of his finish today, “I didn’t finish in a stretcher today, so that was a start! The last few weeks I have felt terrible since the Gold Coast, it just takes a lot out of you doing that. I wasn’t even sure if I was going to start today because I felt that bad. But as we came out of the swim and the bike, we tried to keep the really fast runners behind. Dorian and I really led on the bike, he was as strong as an ox on the bike, we played very tactical on the bike. And while second is not a victory, but from where I was two weeks ago, it is a big improvement.”

The men toed the line with wetsuits, ready to battle the chilly water conditions with only a 750-metre lap to swim. Shortly into the first leg, the men started to string out, with Aurelien Rapheal (FRA) and Richard Varga(SVK) leading out in front. And while the two were able to exit the waters first, a mass of men followed and caused congestion going into the first transition zone.

However, getting a slight advantage away from the large swim pack, the bike started out with 11 men grouping together that was led out by Brownlee and Alarza. The pack also included the likes of Tony Dodds (NZL), Coninx, Varga, Rapheal and Andreas Salvisburg (SUI).

Leading the chase was Mario Mola (ESP), who worked tirelessly to control the over 30-man group in an attempt to catch the front pack. Trailing by 27 seconds, for the entire 20-kilometres, they were unable to close the gap and rounded into the second transition with time to make up.

Right as feet hit the pavement it was clear that three men were gunning for the podium. Brownlee, Alarza and Coninx hammered straight away and went ahead early on the run. It was not until the final lap did they start to string out, but their lead was large enough that the podium looked secured even with a few kilometres left.

It was Alarza that decided to go for it as the bell rang and he was able to break away from Brownlee and Coninx. Entering the venue stadium alone, he entered the finishing chute with the biggest of smiles as he claimed his first career WTS gold.

Brownlee followed a short five seconds behind and took home the silver. Meanwhile, Coninx enjoyed seizing the bronze, who claimed that finally making the podium was one of the best days of his life.

“First podium, it is impossible to describe, I am just so happy. It is the best day of my life I think. The first race was very hard, but my winter was really great, I had good training. I have believed in my quality, so I am just really happy to be able to do well in the race. I hope this was the first step to make it onto the Rio team. I have to also do well in Yokohama, but I hope this was enough.”

While finishing just short of the podium in fourth, Mola put forth the fast run split of the day at 14:24 after being down by over 20 seconds coming off the bike. His performance today guaranteed that he stay the leader in the Columbia Threadneedle rankings. For the third consecutive year the Discovery World Triathlon Cape Town event has been captured by a Great Britain woman, as Non Stanford opened up her 2016 season with a victory.

Showcasing her power in the final kilometre of the run, Stanford signaled the start of her competition year by collecting the gold and seizing the first sprint-distance WTS race of the season.

Commenting on her season-debut win Stanford said, “I came in really apprehensive, some of my friends and family told me they were going to watch me on the TV and I had to tell them they probably would not see me! But I was really shocked to be up there at the front. I was a little worried about the run because I did quite a bit of work on the bike, I thought I might pay for it, but it was just about going out there today and having fun and going through the processes. I didn’t really think about the outcome to be honest with you.”

Making it onto her second WTS podium of the year was British compatriot Jodie Stimpson, who was able to get the silver medal. Finishing off the podium was Bermuda’s Flora Duffy, who dominated the first two legs of the competition, riding the whole 20-kilometre bike course by riding alone. Her bronze medal finish was enough to move her to the top of the Columbia Threadneedle Rankings.

Stimpson said of her silver medal today, “To be honest I didn’t really expect anything from this race, the last two weeks have been pretty dreadful. If anyone follows me on social media you have seen that it has been a really rough couple of weeks, so I am just psyched to come away with a podium.”

Under clear and sunny-sky conditions, the women opened up the third-stop on the WTS calendar with Cape Town’s famous Table Mountain peaking out from the distance. With the typical colder water waiting, the women wore wetsuits for the first time this year.

Duffy (BER) announced her intention to dominate the women’s race right out the gates when she bossed her way to the front of the one-lap 750m swim. Carolina Routier (ESP) followed behind her, along with South Africa’s own Mari Rabie.

Duffy jumped on her bike with a 16-second lead and immediately went to work pushing out a thunderous pace that Routier and Rabie couldn’t match. The pair fell back to a more than 35-deep field of women, while Duffy sped ahead to ride through the first lap with a 30-second advantage.

While the large chase, that included the field’s top contenders such as Stanford, Stimpson, Vicky Holland(GBR), Sarah True (USA), Lisa Norden (SWE) and Anne Haug (GER), attempted to catch Duffy, the Bermudian proved that she still remains one of the strongest cyclists on the circuit and held onto her lead for the majority of the bike leg.

But as the bell lap rang, Duffy’s lead only held up to about 14 seconds and as the final kilometres stretched on, the lead wasn’t able to stick and the chase caught up right before the second transition zone causing a crowded field heading out onto the run.

Right from the gun, a group of five women that included Duffy, Haug and three Brits of Stanford, Stimpson and Holland took off early to get out in front. The pack stuck together for the first half of the run, but as the final 2.5 kilometre mark neared, the podium contenders started to make themselves known.

Stanford kicked in some extra effort in the final kilometre and was able to secure the gold medal position as she made her way into the venue stadium running solo. Her victory not only granted her, her first gold of the season, but it also guaranteed that Great Britain owned Cape Town for the third consecutive year.

Stimpson followed into the finish chute just 7 seconds behind and solidified her third-straight time on the WTS podium this season. It also it the second time that Great Britain’s women have gone 1-2 on the Cape Town Podium. In 2014, Stimpson won gold with Helen Jenkins taking the silver.

While Duffy’s phenomenal swim and run were not enough to get her a gold, a bronze was more than deserved. A final sprint in the last metres of the race allowed her to surpass Haug and secure the final spot on the podium, finally granting her a WTS medal after two fourth-place finishes in Abu Dhabi and Gold Coast.

Duffy said of her performance today, “I don’t know if it was brave, stilly, stupid or what but I came out of the swim with a bit of a gap and I thought, well it is only a 20K so let me see. There was 30 seconds at one point and then I got caught coming into transition. But I did have a little bit of time to soft pedal and catch my breath and mentally prepare myself for a tough 5K. I actually felt pretty good on the run, and there was no way I was finishing fourth again! I spent half the year in Stellenbosch, which is just up the road, so a lot of friends and family are here watching, so the crowd was so amazing so I thought there was no way I am taking fourth, I have to get to third!” Video: 5 Legal 'Cheats' To Help You To Cycle Faster