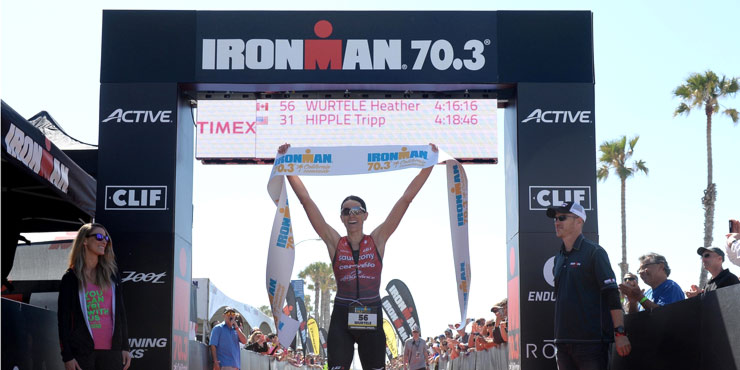 Heather Wurtele added a second title to her 2014 crown at Oceanside, while Lionel Sanders improved on his runner-up performance of last year with a come-from-behind win.

A pair of Canadians took top honors with come from behind wins at the traditional kick-off race of the North American IRONMAN 70.3 series today.

The swim in the cool, calm waters of Oceanside harbor went pretty much to script with Andy Potts leading the charge. However, unlike in past years, he had a great deal of company. When Chris Braden hit the boat ramp to exit the swim, he led a pack of 11 men who were within 27 seconds of each other. Included in that group were Potts, Sam Appleton, Andreas Dreitz, Tim Reed, Maik Twelsiek, and Eneko Llanos. Uber-bikers Sebastian Kienle and Lionel Sanders were 2:30 and 3:00 minutes down, respectively.

Once onto the bike course, Andreas Drietz immediately pushed the pace and quickly got himself to the front of the action—a spot he would not relinquish until late in the run. Behind Drietz, Appleton chased hard to match him. A group comprised of Potts, Reed, and Twelsiek tried to limit their losses to the leading pair. Meanwhile, Sanders and Kienle were riding through the field. Sanders was first to make contact with the Potts group, which now also contained Appleton (who had been dropped by Drietz on the first big climb). Kienle dropped off our spotters’ radar between 45 and 50 miles; when he did reappear, he was nearly 12 minutes down. Drietz was able to maintain his sizable advantage into T2 and started the run with a lead of 2:38.

Onto the run, Drietz ran hard early trying to extend his lead over the group of strong runners which included Potts, Sanders, Reed, Appleton, Twelsiek, and Thomas. The group ran together for most of the first out-and-back with Sanders and Potts eventually opening a small gap. As the first lap ended, Sanders charged hard to get away from the group. He finally caught and passed Dreitz at the nine mile point of the course. Dreitz dug deep and kept Sanders in sight, but Sanders was too much.

In the end, Sanders turned in a race-best run split of 1:11:43. He combined it with a race-best bike split of 2:07:48—making him the 2016 champion in a time of 3:51:17. At the finish line, Sanders said “I pushed so hard on the bike that the run felt like two marathons today.” Dreitz held on to finish second, just 39 seconds back, while Tim Reed rounded out the podium.

The women entered the water three minutes after the men and took the start under the same conditions. A small group quickly formed with Holly Lawrence, Ellie Salthouse, Mary Beth Ellis, Jennifer Spieldenner, and Alicia Kaye leading the way. This group would exit the swim together with a 30-second plus lead over Camilla Pedersen and Caroline Steffen. Previous champions Heather Jackson and Heather Wurtele exited together 2:05 down.

Onto the bike Holly Lawrence quickly established herself at the front—a position she would stay in until the final mile of the bike. She and Alicia Kaye quickly opened a gap over the rest of the field and would eventually extend it to over one minute. As expected Steffen, Wurtele, and Jackson were all riding their way closer to the front of the race. On the big climb at mile 35, Heather Wurtele made a major move, separating herself from the other chasers and moving into third place. By mile 45 Wurtele had the gap down to less than 45 seconds and was closing fast. She pushed extremely hard on the last flat stretch on Vandergrift road and took over the lead just upon entering Oceanside. She entered T2 with a seven second lead on Lawrence. Kaye, Steffen, and Jackson rounded out the top five into T2 between 1:05 and two minutes down.

See also:  And the winner to the Ironman 70.3 Desaru Coast raffle draw is...

Wurtele pushed hard on the run, clearly trying to extend her lead on her chasers. There was a quick shuffling of places three through five, as Heather Jackson stormed out of T2 and over took Kaye and Steffen just a mile in, to find herself in third place behind Lawrence. Over the ensuing miles, Steffen and Jackson overtook Lawrence but made no gains on Wurtele. They swapped places numerous times with Steffen finally getting the better of Jackson in the final two miles.

Wurtele ran her way to her second title here in three years. In the end, the top three woman all ran matching 1:21 run splits. After her victory, Wurtele said: “I had one of those days were my legs felt amazing on the bike so I pushed hard. I sure felt it on the run though.” Luis secures first victory at Yokohama; Zaferes leads a podium sweep for US
May 19, 2019
Posting....