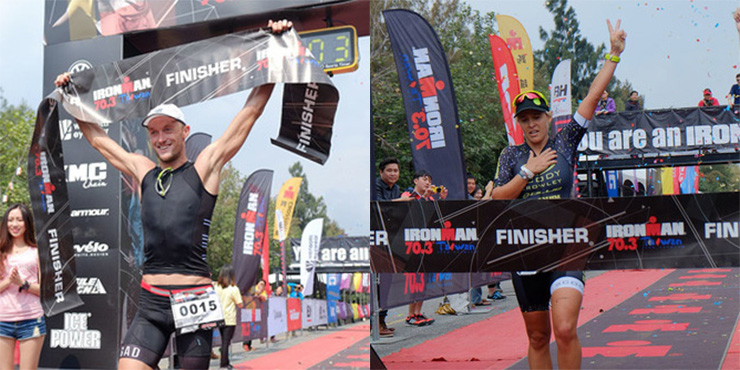 by David J. Toman, for ironman.com

A pair of Australians took top honors as IRONMAN 70.3 Taiwan moved to the small coastal city of Taitung and from November to Easter Sunday.

It produced a breakthrough win for Peter Kerr in the men, the latest Australian to move up from the Olympic distance, while the well performed Sarah Crowley remained patient before unleashing her run to claim the women’s honours. Kerr held a steady pace on the bike, a single loop over rolling terrain through quaint villages with dramatic coastal views, as a race-best 2:04:28 bike split pushed Snilstveit into contention.

The Australian enjoyed a two-minute margin off the bike from a stampede of chasers but produced the day’s best run of 1:16:44 to enjoy a start-to-finish debut victory at the 70.3 distance.

Gordon held an early challenge from Mainwaring at bay for second before Snilstveit pushed hard to grab the final podium place.

“It just so happens that my first ITU race and first 70.3 were in Taiwan. I seem to have a really nice affiliation with Taiwan,” says Kerr. He’ll now set his sights on qualification for the IRONMAN 70.3 World Championship close to home on the Sunshine Coast in September.

A new race plan under a new coach proved successful for Australian Crowley, who ran her way to victory in the women’s race.

Carina Brechters, a relatively unknown 26 year-old German, fought valiantly to maintain her three-minute swim margin through the first half of the bike until Crowley and last year’s runner-up Kate Bevilaqua bridged up to Japan’s Keiko Tanaka to form a potent group of chasers.

“This was manageable for me on the run and let me just worry about myself and keep turning over sub-4km run pace until I caught Carina,” says Crowley.

On the back of a 1:27 run, the only runner under 1.30, Crowley throttled off after claiming the lead with a weather-eye on IRONMAN 70.3 Putajaya this weekend. She won in 4:24.23 with two minutes back to Brechters with Tanaka third.

Crowley, who has put her career on hold as an accountant to focus full time on IRONMAN

More in News
Video highlights from ITU WTSYokohama
May 17, 2016