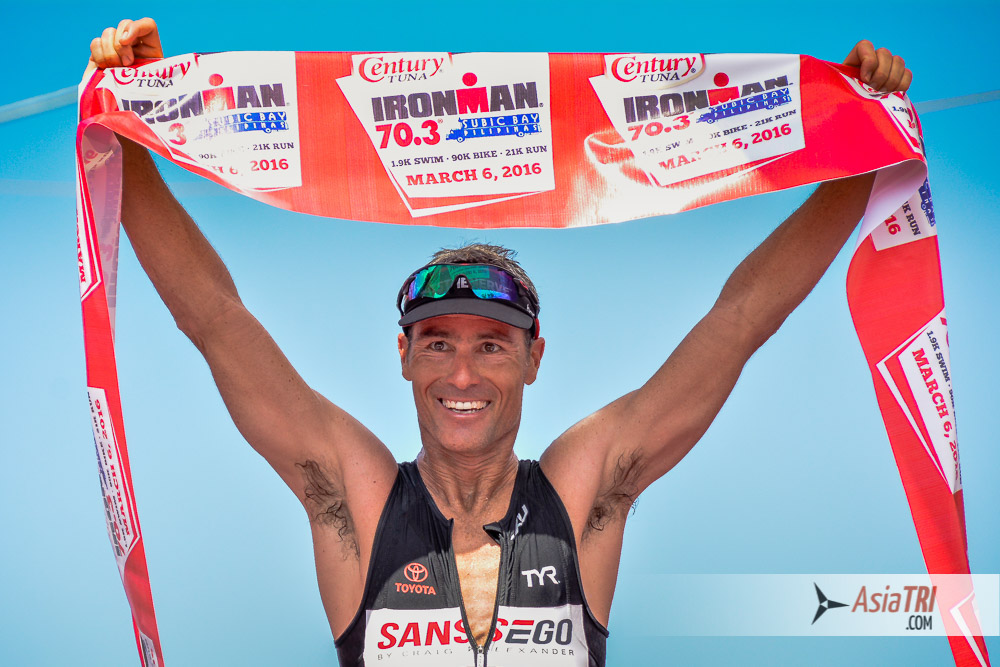 3-Time Ironman World Champion Craig Alexander and Ironman superstar Caroline Steffen, were the winners of the 2016 Century Tuna Ironman 70.3 Subic Bay in the Philippines. Both were among the pre-race favorites and they managed to beat a world class field including Olympians, Ironman winners and Ironman 70.3 winners.

The day started with Sam Betten leading the swim with Germany’s Patrick Langeon his feet in 00:22:44, they were was almost a minute ahead of a pack with the main pre-race favorites that included Craig Alexander, Sam Betten, Tim Reed, Tim Berkel, Mitch Robins and Jonathan Ciavattella

Despite having some of the world’s best triathlete chasing him, Lange managed to hold his minute lead until the transition two, behind him a group of 4 (Reed, Berkel, Betten and Ciavattella) were taking turns and limiting the damage of the uber-biker ahead of them.

With just over one minute gap intro transition two, Lange started the first 10km very fast and was out of sight for most of the out-and-back run course. Crowie quickly moved away from the rest of the chase pack and started to reel in the german. It was then at the 12km mark that Crowie made his move on Patrick to take the lead and win in 03:48:56, PAtrick Lange held the second place finishing the event in 03:50:45, while Tim Reed rounded the podium in 03:52:28 The ladies race started with Olympian triathlete Radka Vodickova leading the swim but with Caroline Steffen on her feet a few seconds back. They had ninety seconds lead on Bree Wee and over three minutes lead on another pre-race favorite, Australian Dimity-Lee Duke.

See also:  Video: How To Change A Bike Tyre

Both athletes remained together on the bike with Caroline Steffen setting up the pace for most of the bike ride, with the day’s best bike split in 02:44:56, Steffen was only a few seconds ahead of Radka into transition. The Dimity-Lee Duke was the third in followed by Bree Wee.