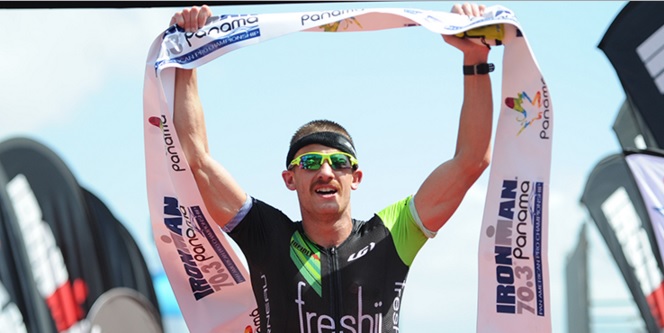 Taylor Arboleda (VEN) was first out of the water with Matt Chrabot (USA) nipping at his heels just seconds back. A large group of 10 men scampered into T1 a half a minute later.

Once on the bike, France’s Antony Coates grabbed the lead as a pack of six men containing Tim Reed (AUS), Luke McKenzie (AUS), Paul Mathews (AUS), Jeff Symonds (CAN) and Chrabot worked together but continued to lose time to the leader. Lionel Sanders (CAN) powered his way forward and eventually bridged his way to the chase group. Not content to sit in once he caught the group, Sanders proceed to plow his way through the group and into second place. Reed managed to briefly match Sanders’ torrid pace but wisely give up on that strategy, settling into his own race plan. Up front, Coates gamely hung onto his lead and managed to carry a 55-second lead over Sanders at the conclusion of the bike. Chrabot and Reed followed the lead pair into transition four minutes later.

Sanders was on fire right from the get-go on the run and started to chew into Coates’ lead. Sanders, decked out in his familiar green racing kit, would eventually catch the Frenchman at three km’s. By 6 km’s, Sanders built up a lead to a minute when it appeared he put his run into cruise control for the remainder of the race.

The Canadian started his 2016 season with a championship win fueled by the fastest bike and second fastest run on the day. The relatively unknown Costes had a brilliant day against some tough competition and finished second, while Reed finished a strong third.

The quartet of women were the class of the field on the bike as they padded their leads for much of the bike ride. Lendway eventually came out on top of the competition and dismounted her bike with a minute lead on Brandon and Haskins. Goss faltered late in the bike, and faded to an over three minute deficit as she reached T2.

Lendway started to lose time to Haskins who was chewing into the lead at an alarming rate in the opening kilometers of the run. At 3.5 k, Haskins surged past Lendway and to the front of the women’s race, holding off all the challengers behind her. The talented Haskins notched her fourth win at the half distance with a winning margin of 1:42 over Lisa Roberts (USA). Lendway came away with a podium finish after being edged out of second by seven seconds.