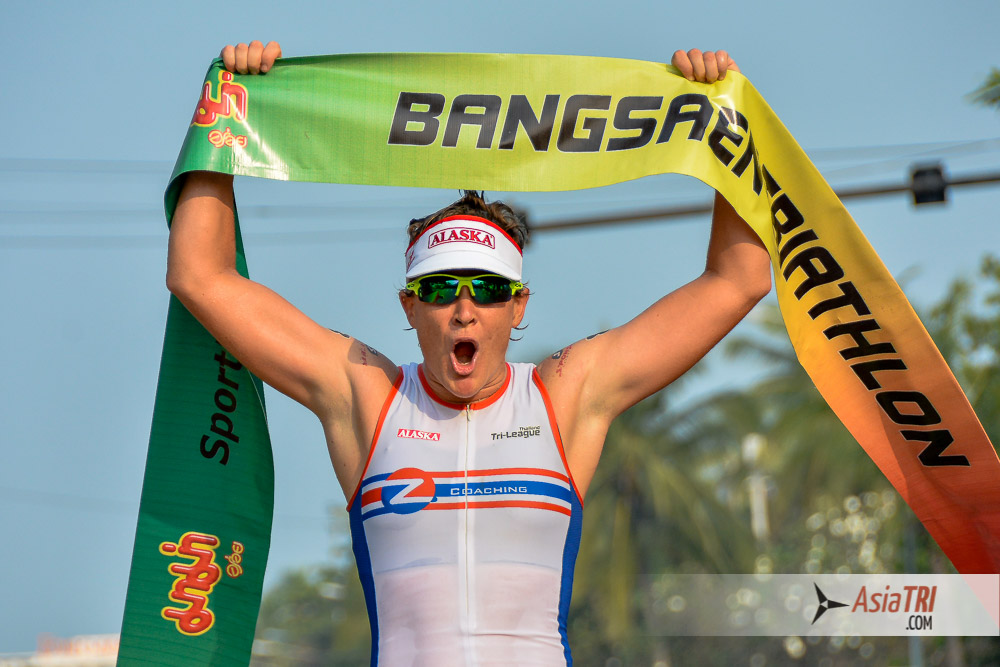 2x Olympian Ruedi Wild from Switzerland and Australian Dimity-Lee Duke, were the winners of the inaugural Bangsaen Triathlon in Thailand. The event was the opening race of the 2016 Thailand Tri-League series and athletes are now ranked towards the final grand prize to be decided at the Ironman 70.3 Thailand in Phuket on November 27th

Lindsey Lawry from Australia was the first out of the water in 00:17:04, a minute behind there was a pack with the main pre-race favorites that included Ruedi Wild, Mitch Robins, Fredrik Cronebork, Paul Amey, Caleb Sadler and Clint Kimmins.

The main pack stayed together for most of the two lap bike course on the very fast, mostly flat highway. On the final half Ruedi broke away from the group and opened a minute gap to the chase group with the day’s best bike split of 00:55:20 for the 40k bike (45kph average).

The day started with former Thailand national team swimmer Sanruthai Arunsiri leading the women’s field by over a minute out of the water, trailing her the pre-race favorites Dimity-Lee Duke, Renee Baker and Imogen Simmonds were all within twenty seconds of each other.

Dimity-Lee took advantage of the small lead out of transition and pulled away from her competitors on the bike, posting the day’s best bike split in 01:03:47, Renee Baker was the second into transition with just one minute gap and bike split of 01:04:53, while Imogen another 40 seconds back.