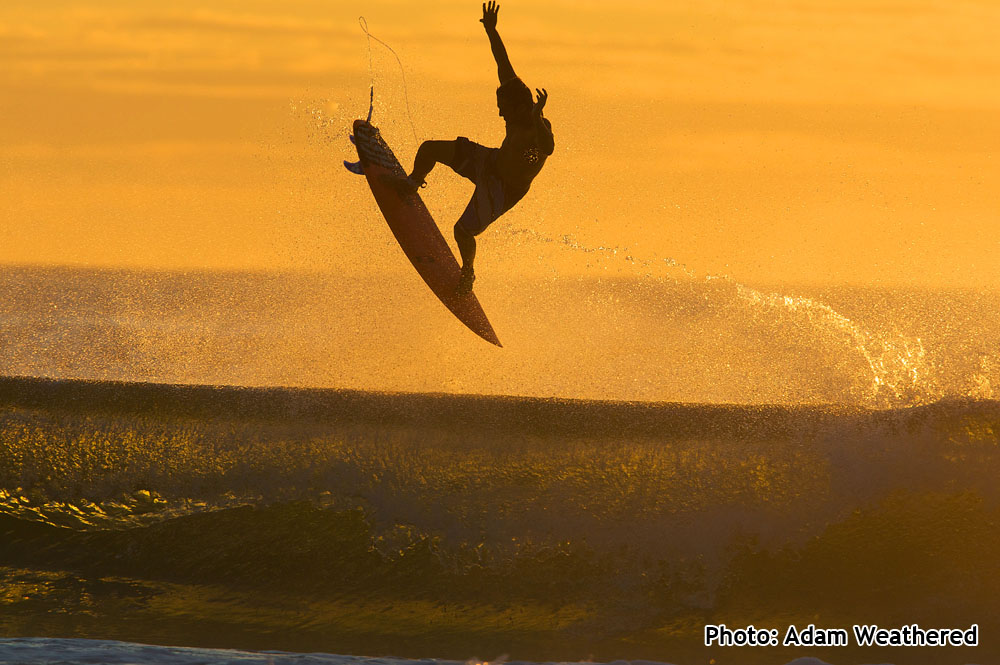 Triathlons in Asia have now a quite unique competitor, Australian Clint Kimmins was a world-class surfer in the 2000’s traveling around the globe to race the world series, he has recently shifted his focus to triathlons and managed to win several age group titles.

Based out of Phuket, Thailand where he works as a triathlon coach in Thanyapura, Clint is on his first full season as a pro athlete aiming to qualify for the 2016 Ironman 70.3  World Championships in Sunshine Coast, Australia.

We interviewed him and learned more about his days as a surfer and plans for the future.

Growing up I knew very little about triathlons and In my late teens I had heard of the Hawaiian Ironman, thought those guys were crazy but I never paid any real attention to the sport. I’ve always played a lot of sport through school but never any athletics, then when I started triathlons I was a complete beginner.

Life for me was all about surfing, ever since I could walk I was on a surfboard and I still think of myself as a surfer even though this will be my first year racing as a professional triathlete.

But now I can’t remember the last time I put surfing before a training session or a race, maybe I need to start dressing as a triathlete and walk around in compression wear at the store (lol). I think having spent years competing on the surfing tour gave me a realization of what it is that is needed to succeed. I was drawn to triathlon for the “first over the line wins” perspective since with surfing there is a lot of luck involved as you are dealing with mother nature and more times than not, finding the right waves to perform on was much more difficult than actually surfing well.

Triathlon is pure, if you train harder than the person next to you there is a good chance you will beat him or her. There is a lot of beauty in that and a victory is so much more rewarding knowing that luck had nothing to do with it.

The biggest challenge for me is not only letting go of the surfing dream but changing my body. Surfers are typically short and muscular especially on the top half of their body. I would like to be much skinnier and loose some of the muscle bulk. Diet is crucial but in all honesty I have a lot of issues with my body and the years it spent paddling a surfboard.

My best results on paper are all as an age grouper as I’am yet to tow the line as a professional. I have had wins over the half and full distance races but the ones that stick out are Ironman Melbourne where I won and set a new course record by over 7 minutes and my first Ironman win at Ironman Western Australia was special as it was my first Ironman victory and I had my mentor and good friend Luke McKenzie there watching.

But the one that really sticks out for me is one of the races that on paper was a bad result, 2015 Ironman Cairns, I was cramping really bad coming off the bike and had lots of nutrition issues on the run, I was in a pressure cooker of a situation because I was catching the guy in 1st but the others behind were catching me and looked great, I had to go deeper than I ever have into the hurt box and really battle some demons. I finished second and my time was nothing to write home about but to pull through when I really could have been in the back of an Ambulance meant a lot to me personally. That’s what I love about this great sport, sometimes the number next to your name doesn’t matter, its about how deep you can push yourself when you really have to.

My plans for 2016 are to race as much as I possibly can throughout Asia, mostly half distance events to gain points for the 70.3 worlds, I’m holding of on a Kona campaign until 2017 as we all know racing an Ironman can take quite some time to recover especially in the heat while halves and Olympic distance events will allow me to race a lot more than if I were to focus on Ironman.

I’m totally honest with where I’m at as an athlete and I want to improve, to really mix it with the big boys I want to get stronger over all three disciplines, I’m looking forward to the future and what may be in store for me over the next 5 or so years.

Working at Thanyapura really leaves me no excuses since I’m constantly surrounded by the sport that I love and I have the best facilities in the world to train my body to be at its absolute best.

I’m constantly being blown away by how fast the sport is growing here in Asia, I see a very bright future for triathlon not only in Asia but also the Middle East. Its great seeing middle ages men and women put down the golf clubs and jump on a bike. I meet a lot of people that pass through Thanyapura and seeing their passion for triathlon is incredible.

I would like to see more and more young children take part in such a healthy sport as well. Coach Ekkarat  “Ricky” Phanthip runs a great program called born free to run which he coaches local youths and assists them with the help of Thanyapura to provide a strong platform into the sport where once they could not financially be able to participate. We need more of this throughout Asia. Right now my weeks are nothing too crazy but training to race as a professional is very different to what I did as an age grouper. My miles in the pool have doubled and I have dropped out a lot of the junk or easy miles, now there is a lot more intensity in my program.

I’ am keeping the mileage much shorter on the bike and I’ am still testing the waters with how to approach my running. Running in Asia you have to be very careful not to cook yourself in the heat,  I recently did a “week in the life” on my Instagram page @clintkimmins I usually don’t talk about my training on social media but I wanted to share just how great it is to train here in Phuket and bring that attention to my followers and draw more people out here to train.

The new program at Thanyapura was very carefully designed by Chris McCormick to benefit both beginners and the elite but a lot of my personal sessions are apart of the program here at Thanyapura.

My favorite discipline is the bike, riding on the beautiful, smooth roads around Phuket is just too much fun. I’m very lucky to be here surrounded by a what I call a playground for triathletes.

Triclub Profile: Triathlon Buddies in Indonesia and it's 2.000 affiliates