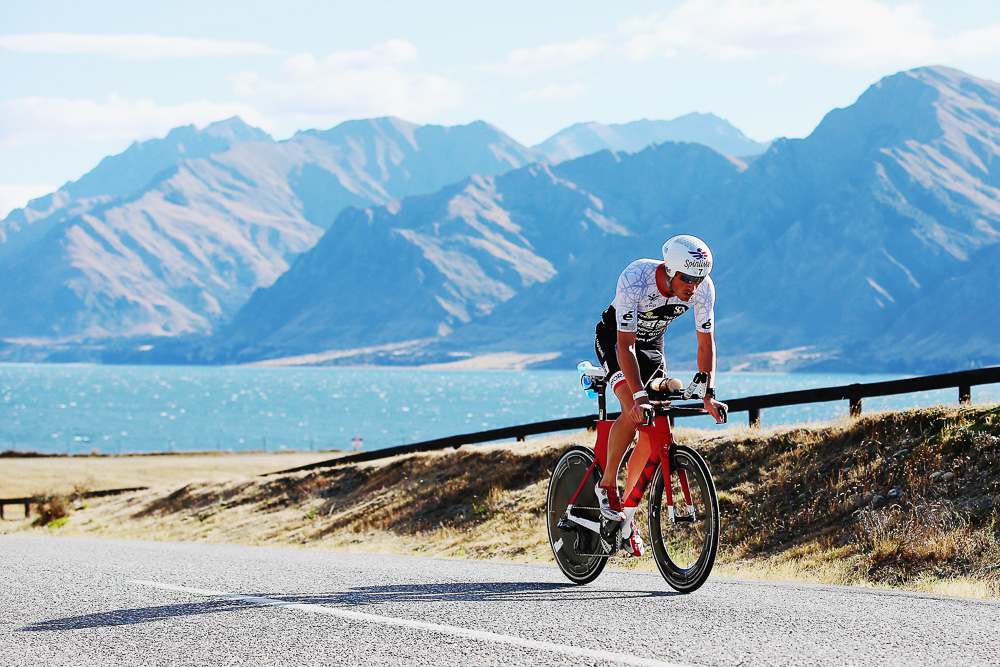 It was a day that threw everything at the 1,640 athletes racing in the 10th anniversary event of Challenge Wanaka. But it was Wanaka local, Dougal Allan (NZL) and Yvonne van Vlerken (NED) who beat Mother Nature and a strong field to take victory in 8:31:53 and 9:26:50 respectively.

Lake Wanaka certainly lived up to its reputation as a tough and honest course with a choppy swim, warm nor’west headwinds on the bike and rain on the run. The rough conditions didn’t deter defending champion, Dylan McNeice (NZL) who exited the water in two minutes ahead of the rest of the field in 43:30, on a course that was slightly shortened due to the wind.

McNeice retained his lead until 98k when the might of the ‘German Cycling Machine’ Maik Twelsiek (GER) proved too much. But behind them was a man on a mission to take his first victory over the 226k distance. Dougal Allan picked off first McNeice at 135km and then Twelsiek at the 14k mark on the run. From then, there was no stopping him and he continued to put time in Twelsiek, taking an emotional victory in 8:31:53. Twelsiek came in in second in 8:40:48 while Matt Russell (USA) finished off the podium in 8:42:53.

“You wait for this moment all your life and when it actually happens it stuns you. I’m a bit lost for words,” he said, before dedicating his victory to his coach, Val Burke. “The bike last year was my strength but this year I wanted to connect a good swim and a consistent run. I didn’t feel the best on the bike but I got the swim and bike I hoped for. I backed myself to catch Maik and you can never write off Dylan. It was a tough race and anyone who gets to the finish today probably deserves a beer!”

The women’s race quickly came down to just two after withdrawals on the bike by defending champion Gina Crawford (NZL), Alyssa Godesky (USA) and Simone Maier (GER). Anna Cleaver (NZL) was first out of the water in 45:19 in a group which also included Crawford, Siddall and van Vlerken. After the swim that surprised even herself, van Vlerken quickly took the lead on the bike but last year’s runner-up Laura Sidall had other plans and over took the former world record holder at 100k, continuing the lead into the run. However, van Vlerken showed why she’s known as the Flying Dutchwoman and slowly ate into Siddall’s lead, overtaking her at around the 12k mark, eventually taking the victory 3:29 ahead of Siddall. Meredith Hill (AUS) finished third in 10:34.

“I didn’t expect to win, I think it was a mental thing rather than my physical shape as I was not as fit as I should be,” said van Vlerken. “I had the most amazing swim. Anna Cleaver who’s an incredible swimmer was really surprised to see me next to her in the change tent! I don’t know how I did it as I was scared of those waves! I was suffering on the bike because when you haven’t trained much, you suffer on that leg. This was my 31st long distance race so I knew I’d be OK on the run and I was!”