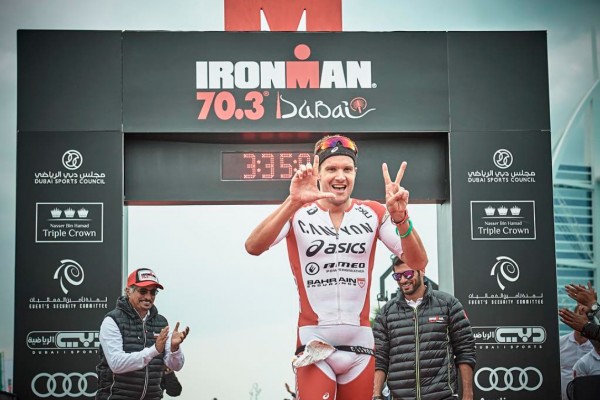 Both were unanimous pre-race favorites due to their dominance of last year’s races, yet they still needed to cross this finish line first. Blustery winds and ocean swells forced organizers to move the swim and shorten the course to 1,200 meters, with an additional 750 meters to run to transition. The out-and-back 90-kilometer cycle loop presented them with a tailwind out and a headwind of up to 20 miles per hour coming back in. A seven-kilometer loop done thrice on unshaded jog paths would be the final hurdle.

The Olympic gold medalist and Ironman world champion Frodeno made quick work of the swim, exiting in front. He never gave up the lead through a speedy 2-hour, 2-minute bike split, coming off the bike with a 3-minute cushion. Frodeno further extended his lead to almost seven minutes by the time he ran through the tape in 3 hours, 34 minutes, 48 seconds.  Josh Amberger (AUS) was second, Bart Aernout (BEL) third then Terenzo Bozzone (NZL) and Jaroslav Kovacic (SVN).

He said, “Today [those] were tough competitions. It was really tough out there, but this course is very fast.

“I had a real dream of a day, one of those days you can just push with the pace the whole day. It was a perfect day for me.”

Frodeno dedicated the race to dearly departed friend and fellow Olympian and ITU athlete Laurent Vidal, holding up his fingers in an L and a V as he crossed the finish line.

Fellow Ironman World Champion and Ironman 70.3 World Champion Ryf faced a little more challenge to her lead on the women’s side. Swiss compatriot Caroline Steffen was nipping at Ryf’s heels from the swim and took the early lead on the bike. Then the “Angry Bird” catapulted forward in the final third of the ride to get onto the run two minutes ahead of the “Warrior Princess.” She held that lead with a steady run, finishing in 4 hours, 1 minute, 9 seconds.

“Big compliment to Caroline. I think she did really good in the first 50km on the bike. She really pushed the pace and she was really hurting me and then I tried to wait a bit. I started to hurt more, the last 40km I wanted to see where my legs were and decided to push a little bit hard. Every time I wanted to slow down I pushed harder, that’s pretty much the tactic. With the wind and the carpet on the floor the run felt quite slow, but I’m really happy.

Steffen ran a steady pace for most of the run. However, she faced down a hard-charging Kaisa Lehtonen, putting on a burst of speed meters before the finish line to retain her spot on the podium.

She said, “I wasn’t really happy they shortened the swim – I was hoping we could still swim 1.9km. On the bike I was quite happy when Daniela took off. I still was on the pace and power I can ride. On the way back it was hard with a lot of crosswind and heaps of headwind – it was quite painful.”

This is Steffen’s first sprint finish in 32 races over the 70.3 distance. She quipped, “I’m 37 years of age and I can still outsprint the young ones. I’m quite happy with that.” Third place was Kaisa Lehtonen from Finland.