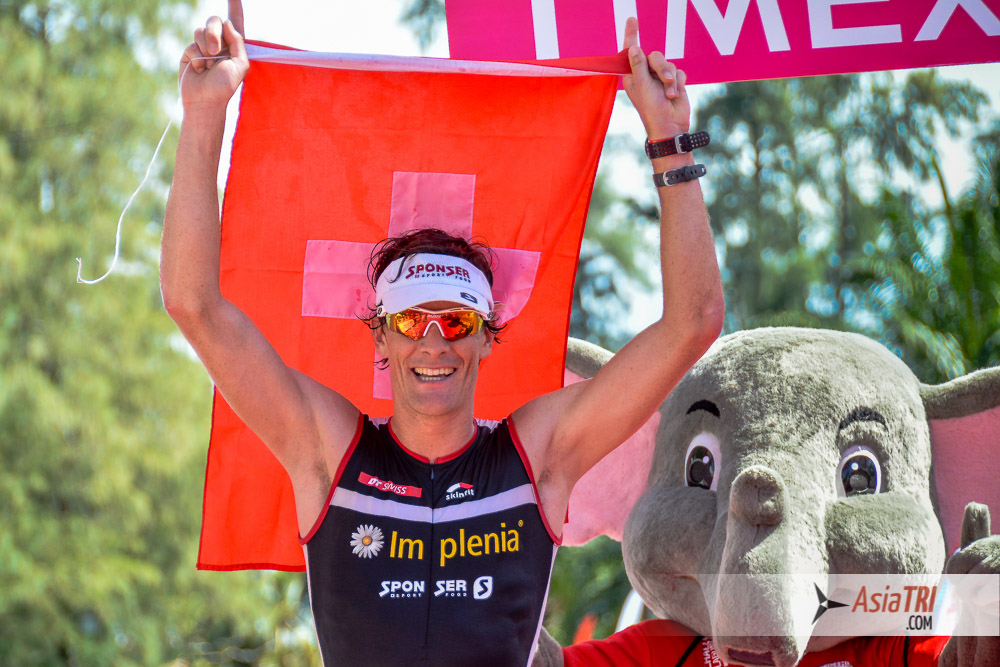 The Thailand heat didn’t stop a Swiss dominance in Phuket at the 2015 Challenge Laguna Phuket, Ruedi Wild and Simone Braendli used their fast run leg to beat a world class field and the challenge conditions of the course. A large pack of 8 athletes exited the water together led by Tim O Donnell, in the mix it was Michael Raelert, Luke McKenzie, Alberto Casadei, Stuart Hayes, Victor Gomez, Michal Murphy, Ruedi Wild  another thirty seconds back, it was James Cunamma and Fredrik Croneborg .

Early on the bike pre-race favorite Michael Raelert had a broken seat and had to drop out, the pack was slowly thinning out in the steep hills of Phuket, Luke McKenzie went ahead solo and had 1 minute lead to the main pack by transition two, O’Donnell, Casadei and Wild who were trailing behing, managed to get a two minutes to Bart Aernouts, who came in transition in fith place.

Once on the run, McKenzie, pulled out at the 4km mark to save his legs for Ironman Western Australia next weekend, it was then Ruedi who quickly moved to the lead on the run, Casadei and O’Donnell were running at a slower pace while the biggest mover was still Bart, that with the day’s best run 01:16:53 moved himself to second place overall. Ruedi held onto the win finishing in 03:54:45, Bart Aernouts second in 03:55:41 and Alberto Casadei third in 03:58:22 Jodie Swallow swim split of 00:21:56 was the quickest of the day and just over thirty seconds slower than the fastest men, she had a gap of two minutes gap to Radka Vodickova and Simone Braendli.

Swallow kept on extending her lead on the bike and with the day’s best bike split of 02:30:06, she reached transition two almost six minutes ahead of Radka Vodickova and Simone Braendli.