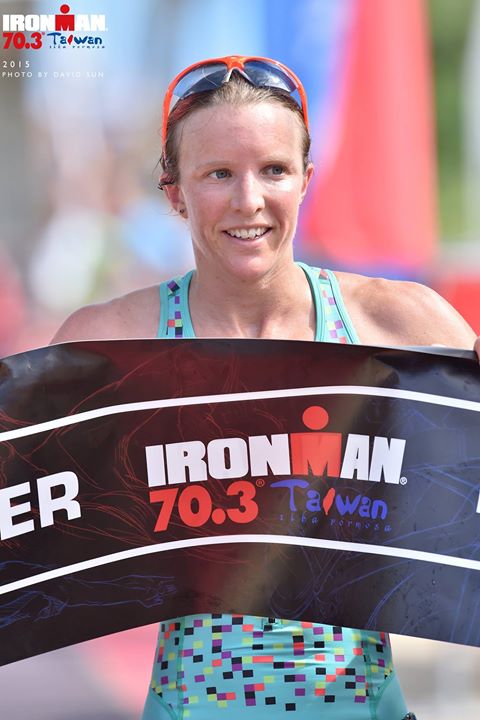 Two Kiwis with the same name but unrelated scored a double in Taiwan.

What began ominously with strong winds and dark skies ended with a newly-minted IRONMAN 70.3 champion as the men’s and women’s front-runners out-lasted tenacious competition at the sixth running of IRONMAN 70.3 Taiwan in the southern resort town of Kenting.

New Zealanders Guy Crawford and Gina Crawford – no relation – each jumped into the lead early, powered the bike and surged over their competition as the mercury climbed on the run to take their titles.

Strong winds forced organizers to shorten the bike course to 77kms although foreboding dark skies gave way to a warm and clear day as the race progressed.

Brit Harry Wiltshire was first to surf ashore with Guy Crawford and Christian Kramer (DEU) just seconds behind in pursuit. When Kramer rode to the lead at 10kms, Crawford decided to “burn a match” to bridge the gap and remain in contention for the win, “instead of battling for second.”

The pair paced off each other the rest of bike and through nearly the entire run until the final deciding move was made. Storming ahead to gain an advantage over chasers Fredrik Croneborg (SWE) and Paul Ambrose (AUS), they opened up a sizeable lead halfway through the shortened bike course. Back down the road defending champion, 42 year-old Kiwi Cameron Brown, had an uncharacteristically poor swim, emerging from the water ninth, and found himself out of contact early.

“That’s when I said to myself it’s now or never, and put in a bit of an effort,” said Crawford who managed to seize the lead to win in 3:33:43, with Kramer two minutes behind.

“I didn’t expect this at all,” said Crawford. “I guess it’s a changing of the guard for me and an encouraging confidence booster.”

Veteran Gina Crawford, with 13 Iron-distance titles and multiple IRONMAN 70.3 crowns to her credit, was nearly two minutes clear out of the water, despite feeling the lingering effects of abdominal and back muscle strains sustained just prior to Kona, which resulted in a DNF on the Big Island.

Surprised by the relatively calm conditions on the mostly flat bike course, she found herself just nipping at the heels of Kate Bevilaqua out onto the run, with Asian-based Australian Dimity-Lee Duke chasing behind within striking distance.

After pushing hard to catch the diminutive Aussie 2km onto the run, Crawford opened up a small gap on Bevilaqua and gradually eased away to win in 4:05:37 with the Australia 90 seconds adrift.

Guy Crawford’s first IRONMAN 70.3 title was made even sweeter by the second-place finish of his partner, Bevilaqua who had challenged for the lead for much of the race. 5 questions to Michael Raelert about his plans for 2016