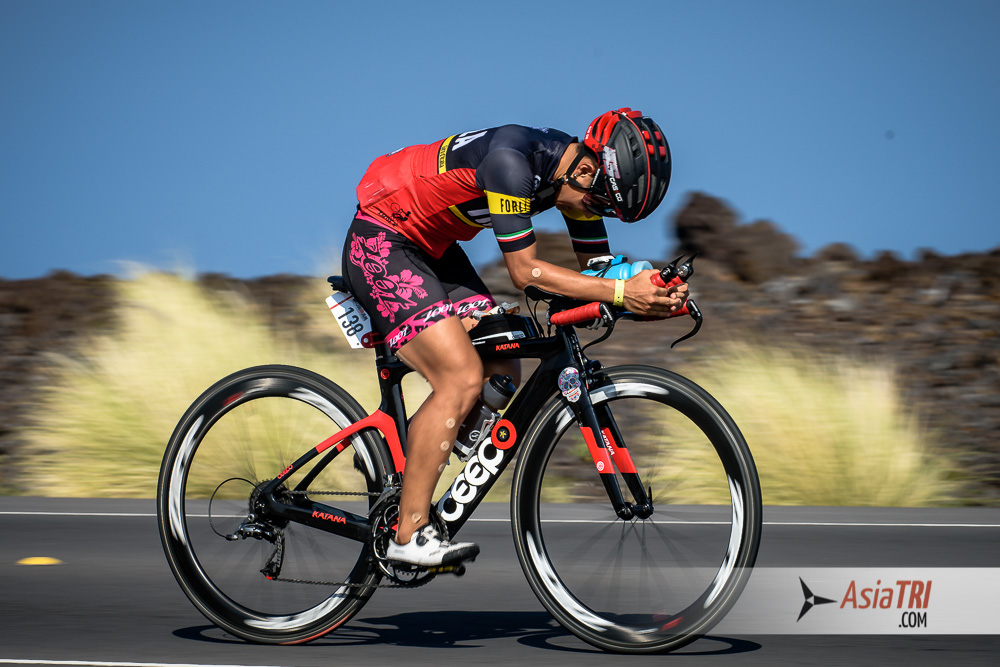 It has been a great adventure for Shiao-Yu Li this year. After wining IRONMAN Japan in August 24, the 38 year old Taiwanese athlete that trains and lives in Taipei, became the first professional athlete representing Taiwan and the only Asian pro athlete this year in Kona, fulfilling her dream that inspired her to become a triathlete.

“I started triathlons 10 years ago with Olympic Distance but when I watched Ironman Hawaii on TV I decided to change to long distance as an age-grouper, shortly after I qualified at China Ironman and this is my 4th time on the Island, the previous 3 I raced as an age grouper”

Shiao-Yu Li did her Kona preparation from her base in Taipei, which she thinks makes it a great and specific training for Kona

“I live in Taipei, there’s a lot of options including mountains and the weather is great, it’s a good place to train as offers conditions similar to Kona”

Her day in Kona didn’t go as expected. Shiao-Yu Li was hit by a car on her final weeks leading into the race, and while nothing major, the wounds prevented her from swimming, she then got sick on race week but managed to bounce back for race day. After a 1h16 swim and while still riding in town, there was some confusion regarding the bike course and she thought she got misled after being overtaken by some of the stronger swimmers that in theory should have been ahead of her.

Shiao-Yu Li didn’t want to get disqualified and stopped to talk to a referee somewhere in the 15k mark of the bike course, who got no report about her cutting the course short and asked her to continue.

Once done with the bike leg, Shiao-Yu Li went to the penalty tent to ask if she could redeem the missing course by adding extra time to her bike split. But since she did not receive any official notice, she could not do anything but continue with the marathon. That’s what she did, her final placing was 24th, but she knew and admitted to have cut the course short. In the end she was give the DQ and isn’t listed in the results.

While a frustrating experience, Shiao-Yu felt that it was a positive lesson and she has plans for the future. The next steps? Shiao-Yu Li wants to qualify to Kona again in 2016 and improve her placings to a Top 10.

“I didn’t think I could qualify for Kona, but then I happened last minute in August when I won Ironman Japan, so now I’m here amazed with all this, yesterday I saw Mirinda Carfrae and we chatted, next year I want do place Top 10, but this year I want to see and learn the course”

“I think its great the fact that Ironman was bought by a Chinese company since there aren’t many ironman races in Asia right now, it will be great for Asian athletes and more people will come to Asia to race and visit”

We wish Shiao-Yu Li a safe 2016 season and hope to see her in kona next year!