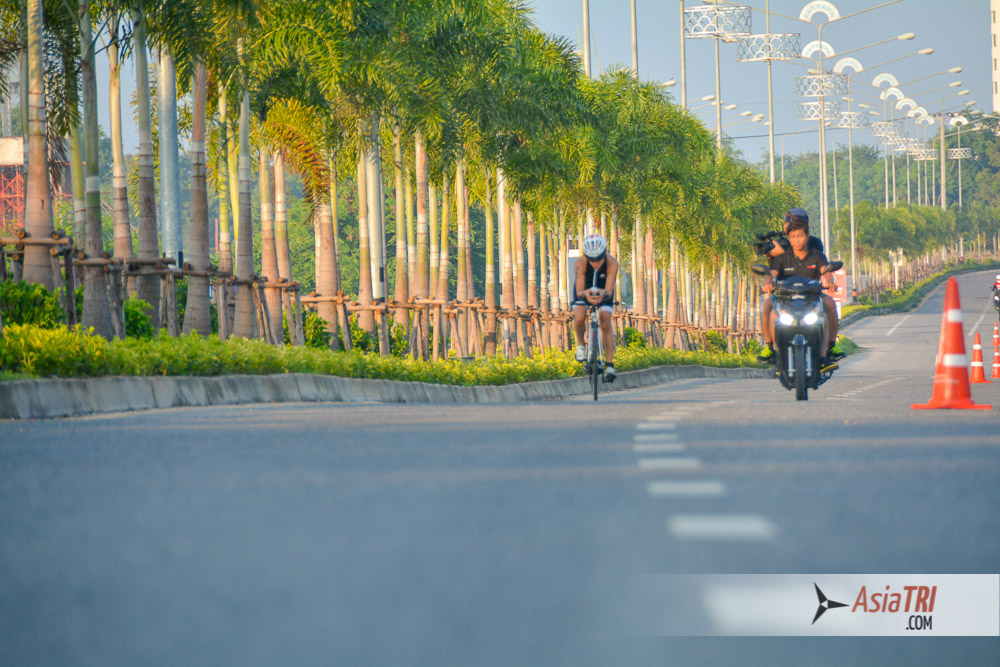 Pattaya International Triathlon was the third event of the Thailand Tri-League, the event was sold out with 1.400 participants and attracted both local athletes from Thailand and International athletes due to the convenient location, Pattaya City is less than a two hours drive from the Bangkok International Airport.

Athletes had the option of the main event, the Standard Distance race format was 1.5k swim/42k bike/10k run, which had a bike leg two kilometers longer than the official distance, athletes can also opt for the sprint distance (750m swim/20k bike/5k run) and the Duathlon (5k run/ 42k bike/10k run). Other than the usual age groups, there was also a Professional category that paid 50.000thb (1.350USD) to the winner, this attracted a world class field that included former World Champions, Olympians and some of Asia’s top triathletes, name such as Fredrik Croneborg, Paul Amey, Simon Agoston, Mitch Robins, Dimity-Lee Duke, Renee Baker and Monica Torres.

Before the course review, it is important to learn how to analyze a race result. One interesting fact about the run course was the hills which made the course much slower than most other races in the region. Most athletes would have been disappointed with their running times as they missed they targets. What these athletes don’t know is that the run course was slower for everyone, and this should be accounted for on their post-race analysis.

The easiest way to understand how fast the conditions of a race was, is to check the winning times especially if there are world class professional athletes doing the same event. These athletes training and race-day performance are always consistent and their fitness don’t vary much from race to race, this creates a benchmark that is more consistent than the race day circumstances such as temperature, currents, wind, course elevation and even the real course length as very often the course can be anywhere from five to ten percent longer or shorter The winner, Australian Mitch Robins, is a world class runner in triathlon, often posts the best run splits of the day in most races he does and has won International events such as Ironman 70.3 Japan. On a relatively fast course, Mitch is capable of running anywhere in between thirty three to thirty five minutes for the 10km run off the bike, on Pattaya race day, Mitch didn’t even break forty one minutes, which makes the course around six minutes than a standard race, that can be accounted around one and a half kilometers “long”. For an age grouper that is running around one hour for the ten kilometers, this difference can be as much as ten minutes extra on their run splits.

Now go back and redo your post race analysis but with minutes ten minutes on the run, it should be much closer see your pre-race targets and that is a more realistic approach to benchmarking race results especially if they are on different courses each time.

See also:  How to handle the heat and humidity in Triathlon - part 2

The wave starts were also separated by ability with the Pro athletes going first, then swimmers that can hold certain speed based on their 100m pace, wave two saw athletes that can swim in between 1’15 to 1’45/100m, the next wave 1’45” to 2’15” and so on. Within each wave, there was a rolling start with a small group of twenty athletes going every thirty seconds. All this made the swim very safe and relatively traffic-free. Once out of the water, athletes had a very long transition to the cark park of Hard Rock café Hotel, first they had to run up a set of stairs for an overpass that went over the main beach road, then on the other side of the road, athletes would jump in and swim across the hotel swimming pool, exit the pool and run across the hotel restaurant and lobby until transition area. While this may sound confusing and dangerous, the organizers took the necessary measures to avoid any slippery floors or accidents, athletes reported being a highlight of the race.

The bike course can be described as “False flat”, as for most of it you will be riding either a gentle uphill, enough to stay on the aerobars and still move at a fast speed, or when going down a gentle downhill, you still need to keep on pedaling or if you only coast you will slow down. So training for this race is the same as training for a flat race. That said, there is one steeper but relatively short hill (100m long), very early into the race when heading out of walking street (Pattaya’s main tourist attraction).

In training, you may want to get used to riding out of the saddle very often while spiking your power outsput when overcoming shorter hills, it’s a powerful position and in shorter hills like Pattaya it keeps the momentum and speed, it also gives the body a change of the aerobar riding position. In terms of equipment suggested for the race, a compact chain ring isn’t recommended as the hills aren’t steep enough and you run the risk of needing to ride in a too high cadence when going downhill, for the same reason a 11t cog in the back is recommended as the smallest cog while most athletes were fine with a 23cog as their largest, beginners athletes should consider a 25t or larger. Road qualities are decent, at times a little bumpy, so a wider tyre choice may make the ride safer and more comfortable.

The organizers kept at least one lane fully closed to traffic and it was a very safe bike ride. Drafting wasn’t a problem as the ups and downs of the course spread people out so did the rolling swim start. The bike course was as good as it gets for a “city” course, safe, fast and clean racing.

Certainly the highlight of the race, the run course had it all, hills and flats and a mixed scenery, from running on the beach along the ocean, into the famous walking street, to public parks with perfect kept gardens.

The first three kilometers are all flat, then the steepest hill, of around 150 meters long and 10% gradient welcomes the athletes for the next five kilometers that are either up or down, before returning to the beach road for the final flat two kilometers. The below run set, done on the treadmill, is my favorite workout to get athletes ready for this type of run since it simulates the variety of hill gradient while teaching them to maintain a solid effort and pace on the flat sections of the course

After a 10-15min warm up complete the below 2 times at just below your race day pace:

Make sure you are also ready to do a lot of downhill running, work on a quick stride rate to avoid too much pounding and maintain your technique as smooth as possible to benefit from the downhills rather than let your lets fatigue from the pounding and avoiding a heart rate spike from too fast downhill running.

See you at the Pattaya Triathlon 2016!