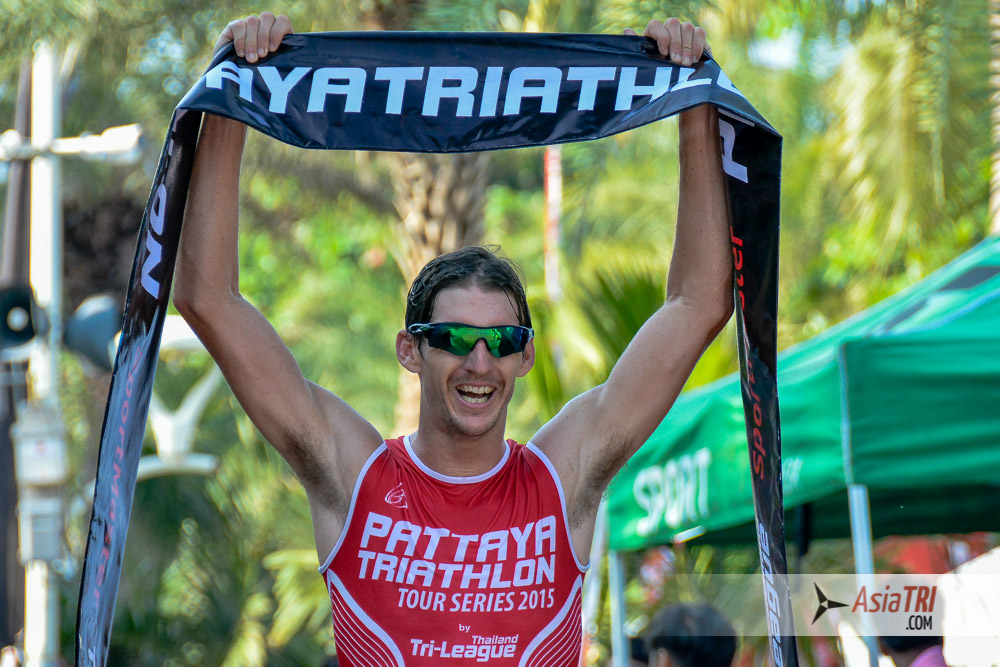 Australians Mitch Robins and Dimity-Lee Duke were the champions of the 2015 Pattaya International Triathlon, while Mitch Robins had a tight dispute with his competition, Dimity-Lee dominated the event for most of the day and had a comfortable win only a week after a solid performance at the Ironman World Championships in Kona, Hawaii on October 10th. The event is part of the Thailand Tri-League Series and the final race is the traditional Laguna Phuket Triathlon.

A group of 6 athletes including all the pre-race favorites exited the swim together led by Mitch Robins exited the water together in 18:58 for the 1.500m swim, on his feet it was Paul Amey, Simon Agoston, Caleb Sadler, Nick Gates and Fredrik Croneborg.

On the bike, a few attacks were made without much success, which was enough to drop one of the fastest runners of the field, former Olympian Simon Agoston, the pack of now five athletes remained together until transition two and it was then a 10k run race over the hills of Pattaya City

Paul Amey and Mitch Robins quickly got away from the rest of the group and the duo ran shoulder by shoulder for the first three kilometers, when Mitch managed to open a small gap which only grew until the end, his winning time of 02:07:02 was one and a half minute faster than New Zealand’s Paul Amey, who secured the second place in 02:08:34 and  Australian  Caleb Sadler was third in 02:08:46. Pre-race favorite, Sweden’s Fredrik Croneborg who  won the two first events of the series was fourth place, only a week after his debut at the Ironman World Championships. Thailand’s Sanruthai Arunsiri was the first female out of the water in 19:33, she was followed by Brooke Langereis in 20:52, then the pre-race favorites Renee Baker and Dimity-Lee Duke together in 21:38

Once on the bike Dimity-Lee quickly worked her way through the field and with the day’s best bike split in 01:05:59, she reached transition two almost three minutes ahead of Renee Baker.