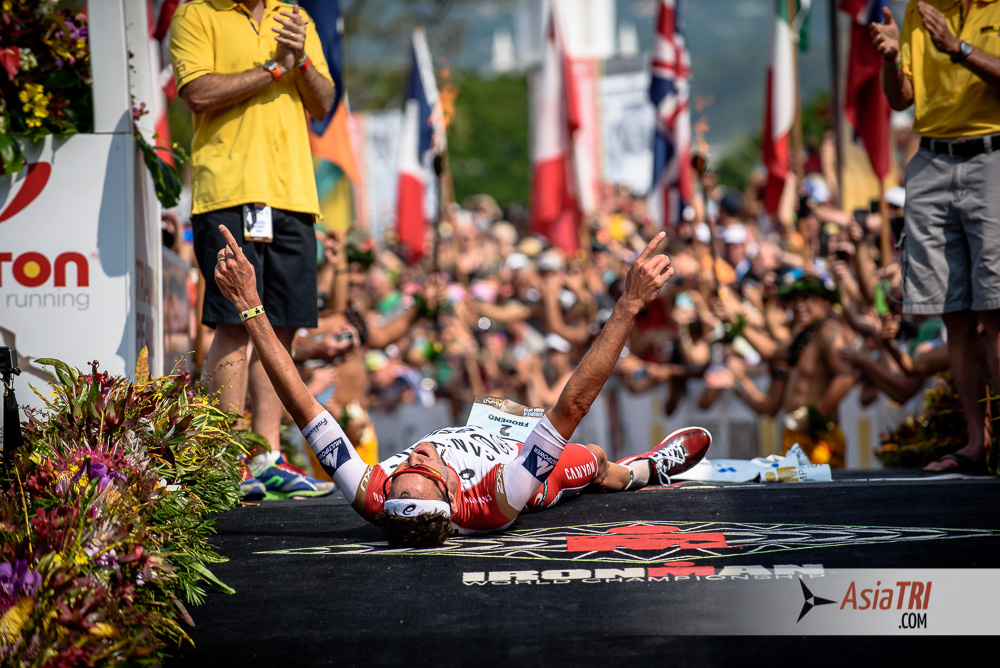 In a day with high temperature and low winds, Jan Frodeno and Daniela Ryf showed absolut control during the race and dominated the event.

In the 38th edition of Iroman Hawaii, the forecast were very challenging conditions, however athletes were gifted with calm winds and ocean, what allowed one of the fastest times of all times. However, while these conditions tend to help the strong runners, we watched today a race dominated by strong bikers. The swim was slower than usual, just like in 2014, there was a strong current and some chop around the u-turn mark which made the return to the pier very slow. New Zealand Dylan McNeice was the first out of the water in 50’48”, followed closely by Andy Potts and Jan Frodeno.

The kiwi lost his lead while still at T1 and Frodeno was the first to reach Queen K. Two minutes back from the three leaders, a group with over 20 athletes exited the water within one minute of each other, including Brent McMahon, Romain Guillaume, Andi Böcherer, Andreas Raelert, Tim Don, Tim O’Donnell, Ben Hoffman, Luke McKenzie, Tim Van Berkel, Tyler Butterfield, Igor Amorelli , Fredrik Van Lierde and others

The surprise in the swim was Sebastian Kienle who also swam with this main pack in 52’36”, around two minutes faster than his usual difference to the main contenders.

It didn’t take long until Frodeno started to show his strength, however without managing to pull away from his competitors. Kienle quickly overtook all his rivals and took the lead at the 31k mark, setting the pace for another 16 athletes that followed him. This pack rode until the Havi u-turn mark, with Kienle and Frodeno taking turns at the front for most of the time but with some help from Ben Hoffman and Tim O’Donnell.

After Hawi, Tim O’Donnell took the lead and was followed by Andi Böcherer, Sebastian Kiene and Ben Hoffman. The southwest wind hit as the athletes start to descend which allowed some athletes to ride as fast as 110kph at that part of the course! There was also a few minutes of rain coming back from Hawi. O’Donnell managed to open a minute gap from the pack but the german duo quickly worked together and bridged the difference before they hit the Queen K, the three then managed to open a large gap to the chasing group on the way back to Kona. Once on the run, Frodeno, showed early why he was the favorite, his first 5km split was in sub 18’ taking the lead early inthe run, and his 10km split in 36’30”. Once he built a lead of 2 minutes to Tim O’Donnell, the german managed his lead during the entire marathon, taking walking breaks during the aid stations to cooling and fueling purposes. O’Donnell had a conssitent run, managing to pull away from Kienle then opening a gap to Raelert, however Raelert stayed within striking distance and managed to overtake Tim with less than 3km to go, to repeat his 2nd place from some years ago.  Andy Potts repeated his fourth place from 2014 while Tyler Butterfield, from Bermuda, was 5th improving his 7th place from 2013.

“Everyone laughs at me as I stop at aid stations, but look, I’m the world champion”Jan Frodeno

The 2014 Champion Mirinda Carfrae, exited the water alone in 1:00’55”, six minutes behind the leaders and one minute behind Mirinda it was Canadian Angela Naeth and another two minutes behind another small pack with  Asa Lundström, Dimity-Lee Duke and Ariane Monticeli. On the way to hawi, the strong athletes worked together to put ontime on Carfrae. First it was  Caroline Steffen and Daniela Ryf who took turns in the front, then Jodie Swallow and Leanda Cave also helped.

This also resulting in dropping Haley Chura, Meredith Kessler and Rachel Joyce, while opening the gap to eight minutes to Mirinda that couldnt match the pace of the leaders. On the climp to Hawi, the gap from the leaders to Mirinda was at 15 minutes it was then that she pulled out of the race due to back pain (she was hit by a car days before the race, but without any initial major problems). Canadian Angela Naeth, who is a rookie in Kona was slowly moving up in the ranks without being noticed by the official coverage, before Waikaloa she was 1’30” ahead of Rinny and in Hawi top 10 in the race.

Onthe climb to Hawi, the girls had a headwind, Ryf managed three minutes on the pack without a noticeable attack. After the u-turn, Jodie Swallow made her move opening two mintues to the nearest competitor and at one point was only one minute behind Ryf. It was then a steady race without too many changes, Daniela kept on putting time on the group reaching T2 with a bike split of 4:50’, 7’20” ahead of Jodie Swallow. Another 1’30 back it was USA’s Mary-Beth Eliis with Camilla Pedersen. Michelle Vesterby, Angela Naeth and Rachel Joyce came in right after. Canadian Naeth, dropped from the race duting transition with a broken toe. Once on the run, the strongest runners were too far off Ryf to put on any threat, Ryf kept her strong pace and managed to increase her lead to the nearest competitors except Rachel Joyce. The british told AsiaTRI editor pre-race she was feeling confident on her run and had another amazing day in Kona, taking the 2nd place before the half way point. Behind the two leaders, there was a lot of changes, Liz Blatchford had another great run and repeated her 3rd place from 2013. Danish Michelle Vesterby improved one position from the bike and was 4th place. USA’s Heather Jackson, another Kona rookie in the pro race, did her usual catch up race and after exiting the water among the last athletes, her bike and run took her to the 5th place. In a race when the athletes pushed the pace on the bike, no women managed to break the three hour on the run.

How to follow the Ironman World Championships this weekend