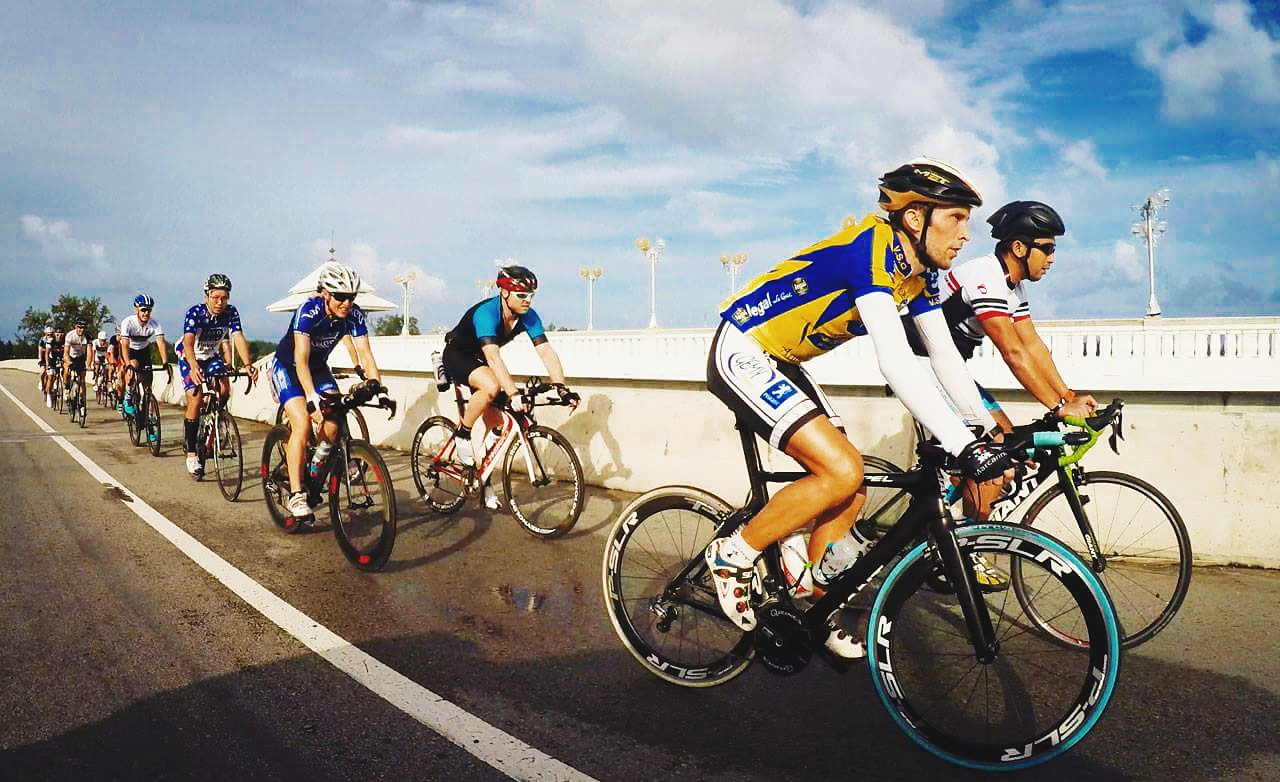 Barnett Angeles and hugo Babin, the winners of AsiaTRI’s August giveaway, enjoyed 9 days at Thanyapura’s supercamp from 22-29 August, below their report. Don’t miss our September giveaway and WIN A FREE ENTRY TO SUNSMART IRONMAN 70.3 BUSSELTON 2016: “Thanyapura is well known for its world class sports facilities. The recently concluded Super Camp was spear-headed by three of best athletes in the sport. Sergio Borges, Chris “Macca” McCormack, and Nick Gates. It’s a 9 day triathlon camp which is a big block of workouts perfect for those looking to “up” their game.

I was expecting for an easy workout on the first day of the camp for the coach to gauge the athlete’s fitness level. Instead, the coach made us do a 4x time trial hill repeats and it wasn’t easy as the Ironman veterans were pushing hard and being left behind wasn’t an option. Everyday we were required to do at least 2 intense workouts with rests in between. Sessions are done mostly outside Thanyapura which I find exhilirating as we got the chance to run around the rubber tree plantation surrounding the Club both on the road and trails. I consider Phuket as one of the most cycling friendly countries. Freeways have designated bike lanes to ensure safety of cyclists. We were rewarded by the majestic view of the coastal roads of Phang Nga Bay for our regular “Bakery” ride which consists 110km of cycling. We also did the Phuket Gran Fondo loop which is 120km and the Laguna Phuket/Challenge Phuket hilly course along the Laguna coastal area.
Camp sessions were not just all swimming, biking, and running. We had days where we did Yoga and Self Myo-fascial release also known as foam rolling technique with Erin Fischer. Sports Scientist Tom Topham made a swim video analysis for swim technique correction for all the Super Campers and was analyzed by Sergio and Tom. FTP (Functional Threshold Power) Test was also done by Tom Topham, Nick Gates, and Sergio Borges which isn’t easy for first timers as we had no idea that we had to go hard during the 45-minute test. A nutrition talk for athletes was also held by Sports Nutritionist Marcela Soto.
It was a great experience to be a part of this camp. I would definitely go back if I had the chance. The suffering was all worth it. Thank you AsiaTri!”
–
From Hugo Babin

“When I entered the game to win a free Super Camp at Thanyapura for 10 days, I didn’t think I could earn the prize. The game was guessing the winning time for the Bangkok Triathlon. Ever since I was a kid, we made friendly bets in the family on the winners of important cycling races and still do so to this day. I like to believe this experience helped me a little this time.

Quickly after the announcement of the results, I was put in touch with the staff at Thanyapura and arrangements were made to pick me up at the airport. Upon arrival, one day prior the beginning of the super camp, I was given a complete tour of the facilities from the fitness area, tennis courts, pool area to the track and the hotel. I had already seen promotion videos but was nonetheless very impressed by the standards and how convenient everything is. Everything is organized to be convenient and within a short perimeter.

The camp began on a Saturday morning, at 6 am by a swim session. On the program : race specific workouts, a perfect way to set the tone for the rest of the week ! I never really enjoyed training in the pool but this time was different. I couldn’t quite tell what was different that day, swimming was a pleasure and the water felt different. Later during the day, while sharing my feelings about the swim I was told the pool is non-chlorinated, it is ozone filtrated and believe me, it may look like an insignificant upgrade but it changes the feeling drastically. We then proceeded to our bikes for a specific workout using big gears on a set course. For those who live in a big city, riding in Phuket is very refreshing : a great variety of courses, from mostly flat to the infamous steep (20%) Naithon hills, little traffic, big shoulders on large roads, shade… To put it short, perfect conditions. The last session of the day was a classic run off the bike near the hotel. The rest of the training sessions during the 10 days camp were very enjoyable. We tried a variety of workouts in the pool, from longer sessions and individual work on stroke technique to fun relays to work our sprinting. Rides were to me the most pleasant part of training with scenic views on the Grand Fondo ride (120km), short bouts of racing at the front of the group on weekends with the cyclists and the steep hills mentioned above. Among other things, we tested our Functional Threshold Power on the bike with the supervision of Nick Gates (former professional cyclist), had feedbacks on our bike position, did yoga, rolling and even mind training classes.

Another important aspect of the camp was the atmosphere and the new people I’ve met. Other participants were also here to have fun while still getting serious workouts. For those used to training on their own like myself, a camp is a great way to break the routine, make new friends and talk about your passion for the sport and race experiences to like-minded people.

I’ve had a great time in Thanyapura, and I would highly recommend such a camp for anyone preparing an important race in their calendar. The volume and intensity of training along with the great conditions and perfect setting to recover will set you up for a good start in your preparation. You will go back home with new motivation and workouts to implement as well as the insights from the coaches on your strength and weakness and where to put your focus to improve in the future.”

Stay tuned to our monthly giveaways and sign up for September’s promotion: