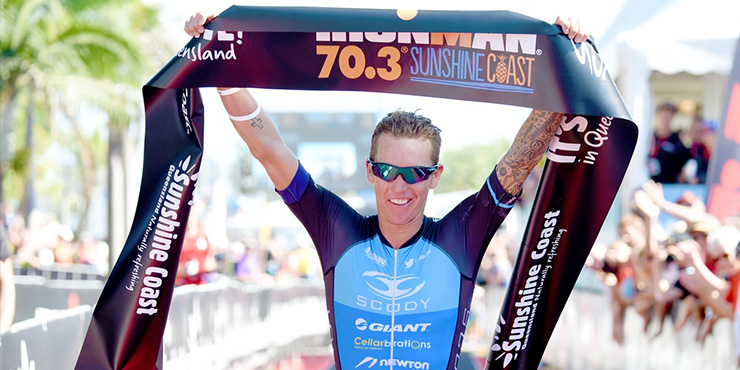 Caroline Steffen made it two in a row in her adopted home while Tim Van Berkel grabbed his first win at the Sunshine Coast.

The wins were the perfect hit out for both who are in the final stages of their preparation for the IRONMAN World Championship in Kaliua-Kona, Hawaii next month.

Van Berkel relied on a strong run to take the win from fellow Aussie Luke McKenzie and New Zealand’s Terenzo Bozzone who rounded out the podium.

“I was happy with that race, especially with the IRONMAN 70.3 World Championship here next year, I hope I race like I did today,” says Van Berkel. “It will be a lot tougher next year, but this is a great course, the spectators are awesome, it will be an amazing world championship.”

The pre-race script followed to a tee on the bike with Amberger turning his small swim advantage into a lead of 1:48 by the 30km mark.

With Amberger potentially stealing the race away, the chasers comprising McKenzie, Bozzone, Munro, Fettell and Van Berkel put the hammer down to whittle Amberger’s advantage to less than a minute by the 70km mark. By the start of the run his buffer had all but evaporated and within 5kms of the run McKenzie, Bozzone, Berkel, and Fettell had all bridged the gap to the leader.

From that point Van Berkel went from strength to strength pulling away to win by over two minutes.

“I was seventh last year in Kona and the goal is to finish higher this year. I feel mentally tougher this year than last year. I’m ready to have another crack, and to get a win here today this late in the year gives me great confidence going into next month,” Van Berkel says.

For Steffen the win was her fourth IRONMAN 70.3 title of the year and showed she is in sparkling form ahead of the IRONMAN World Championship. Australia’s Annabel Luxford took second place with Czech Radka Vodickova in third.

“It was an amazing day, and it’s a really fast time. I really enjoyed it. The fans were awesome out there today. I said before the race that this event means so much to me, I’m excited to have a race in Mooloolaba, my home base for six years now,” says Steffen.

Vodickova enjoyed a buffer of 28 seconds out of the swim to Luxford, with Steffen a further six seconds back.

Luxford and Steffen bridged the gap to Vodickova early on the bike, and from there the trio continued to pull away from the rest of the field.

By the 70km mark Steffen and Luxford had opened a 1:36 gap on Vodickova.

In a carbon copy of the Flight Centre Active Travel IRONMAN 70.3 Cairns in June, Steffen proved too strong on the run to take the victory in 4:09:25, only 24 minutes behind the leading men, with Luxford 2:36 back and another three minutes to Vodickova.

Steffen will leave for the Big Island this week to complete her preparations for the IRONMAN World Championship on October 12.