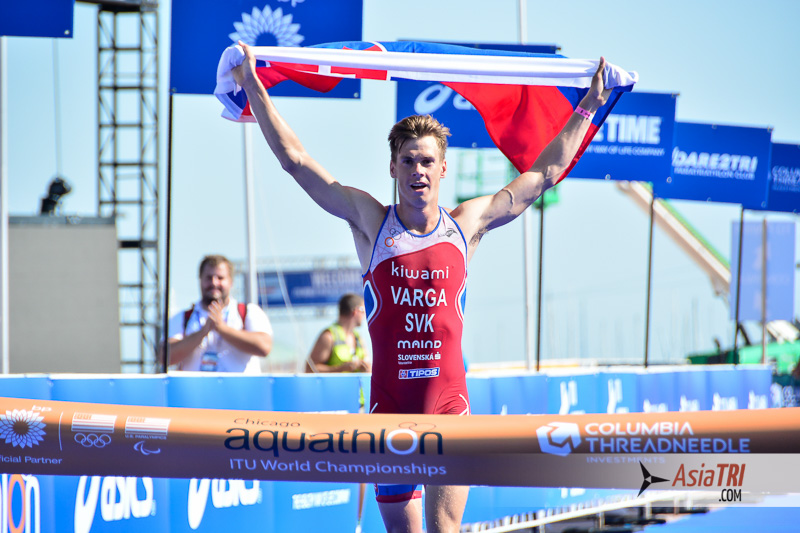 The ITU Aquathlon World Championships kicked off a week of action at the ITU World Triathlon Grand Final Chicago on Wednesday with elite, paratriathlon, junior, U23 and age groupers racing over a 750m swim and 5km run. Slovakia’s Richard Varga, who will race later this week in the men’s elite triathlon, stole the show as he scored his fourth career Aquathlon World Championship title.

Richard Varga swam and ran his way to an impressive fourth multisport World Championship title when he beat out tough competition in Igor Polyanskiy by just seven seconds in 25:42. “I didn’t expect it would be that easy today, I thought it would be much harder because the field was pretty strong, as you can see with Polyanskiy and Mcelroy,” Varga said. “So I thought they all would give me a struggle, but I feel really good today, on the run especially. So I am really happy that I could win today.”

Russia ruled the day in the women’s race with strong swimmer Anastasia Abrosimova clocking in first followed by teammate Elena Danilova. Abrosimova set the pace on the one-lap 750m swim along with compatriot Anastasia Gorbunova and Great Britain’s Hannah Kitchen. But the pair couldn’t hang on to Abrosimova’s blistering tempo on the run and fell behind. Instead it was Danilova that kicked into turbo to pick off women until she ran herself into second place, follow by Long Hoi (MAC) in third.

Ben Sayles collected the first gold medal for Canada when he won the Under23 men’s Aquathlon World Championship by more than a minute of Egypt’s Mohamed Elsaied and Mohamed Khaled. The only two competitors in the women’s category, Joselyn Brea (VEN) went home the women’s U23 gold medallist by more than eight minutes while Brazil’s Tamyres Domingos took silver.

Croatia scored the men’s and women’s junior races, taking the top two spots in both events. Elisabetta Vitasovic led from line to line followed by teammate Chiara Perusko to take home the clear gold and silver while Fatma Hagras of Egypt rounded out the podium.

On the men’s side, Luka Paliska started the day in the middle of the pack on the swim, but quickly zoomed past his competition on the 5km run, eventually sailing over in first. While his countryman started out with a solid swim, he only had enough gas left to hold on for second while Yhousman Perdomo (VEN) held his third place positon out of the water through the race to earn bronze.

“It is awesome to have a World Championship, I am so excited, I fought that one hard,” Martin said. “Everything was great on the swim, I was cruising down the first gate and made the first 180 degree turn, and I think I just hit the front tire too hard against the ground, so my spokes went out so I had to wheelie in the rest of the last 3km.”

Top images from the ITU Aquathlon World Championship in Chicago