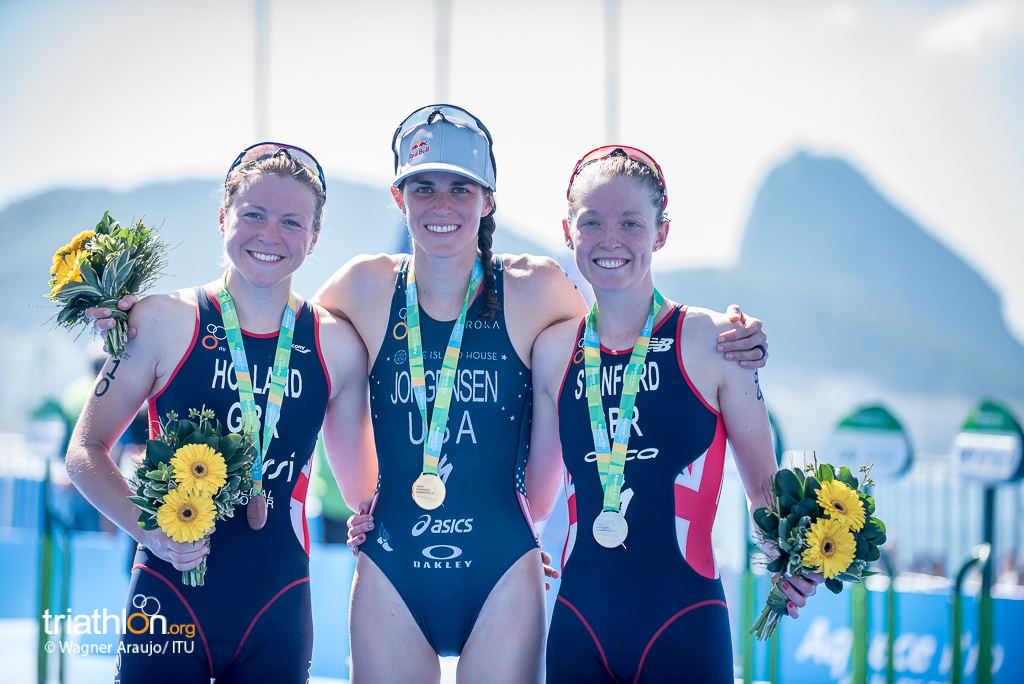 Olympics silver medallist Javier Gomez punched his ticket to a third Olympics, while Gwen Jorgensen will toe the line at her second Olympics, as both athletes won the 2015 Triathlon Test Event on iconic Copacabana Beach on Sunday.

Gwen Jorgensen (USA) has won herself yet another gold medal, but this time the gold means a little bit more—she has automatically qualified herself for the 2016 Rio de Janeiro Olympic Games next summer. Breaking away on the third lap of the run, she was able to claim her spot at the 2015 Rio de Janeiro ITU World Olympic Qualification Event on Sunday in front of crowds of local Brazilian people on the beautiful beach side of iconic Copacabana Beach. It was her 12th consecutive triathlon victory.

“I have been working towards this for a while, since the London Olympics, so I am excited to be able to come back here next year,” said Jorgensen on qualifying for the 2016 Rio Olympic Games.

Claiming the silver and bronze was Great Britain’s Non Stanford and Vicky Holland. Stanford pushed hard in the last two laps in order to stay within a close proximity to Jorgensen, which ultimately landed her the second-place position.

Holland battled for her bronze medal over a one-on-one fight with Sarah True (USA). Kicking up the intensity in the last lap, she was able to break away to finish third. True ended the day in fourth, but was able to officially qualify as the second U.S. women for the Olympic Games.

See also:  21 Teams Will Fight in Hamburg for the Mixed Relays Crown

Unlike the USA, Stanford and Holland did not automatically punch a straight ticket to Rio for next year. Great Britain qualifications require another podium finish in the World Championships later this season, but both women can rest easily knowing they have the accomplished the first step in a two-step process.

“For us this is step one, but probably the most significant step. But once you have done one step, the next step gets a little bit more obtainable,” said Stanford. “I was unsure how it was going to go today, I had eight weeks of good training, but before that I was training and running all over the place. Back in February I just thought about doing steps, so to think I have gone from there to then come in second in the Test Event, it just shows the progress I have made. I am as happy as most really.”

Javier Gomez Noya (ESP) added to his collection of titles and accolades when he crossed the finish line first at the 2015 Rio de Janeiro Test Event, ensuring he would line up again in 2016 as he fulfilled both his National Federation’s requirements for Olympic qualification and earned Spain a spot on the start list. It was the second Test Event he has won, after winning the Beijing race in 2007.
“It feels great to have my qualification for Rio. I enjoyed racing the course, it was a tough race but I felt quite good. I was saving some energy for the last two laps of the run because I am training for World Championships, so it was nice to win, I wouldn’t say it was easy, but it was controlled so I am really happy,” he said.

Vincent Luis (FRA) also secured France a berth to Rio, when he crossed over in second, simultaneously fulfilling his Federation’s qualification guidelines while Richard Murray ensured South Africa would be represented in 2016 when he earned a bronze with the most impressive run of the day.

Two distinct groups formed on the one-lap ocean swim at Copacabana Beach, with Richard Varga (SVK), Henri Schoeman (RSA), and a string of French men including Luis, Dorian Coninx (FRA), and Pierre Le Corre (FRA) exiting the water first. Getting out in front in the 1.5km swim was pivotal to several athletes in their paths to Olympic qualifications.

“I was in a bit of pressure because some of the French cut out, so it was really hard. But I was confident on the course, it was a very technical bike leg, but I swam good so I was under pressure but it was good.”

While both Gomez and Luis swam, biked and ran in the lead group, the line to the podium wasn’t as clear for Murray, who suffered a minute deficit behind athletes such as reigning Olympic gold medallist Alistair Brownlee.

On the back half of the 10km run, Gomez extended his lead, making it clear he’d cross the finish tape first with Luis second, Murray changed the game for many as he sailed past man after man pulling himself up from a minute gap onto the podium.

“I don’t think it has sunk in yet, I know that is such a cliché thing to say, but you know at the start of the day I had to motivate myself because it was going to be difficult to get. The swim was real rough, I came up quote far back, but even so the run was one of my best today, so overall in the end I am happy with the way things turned out today.”