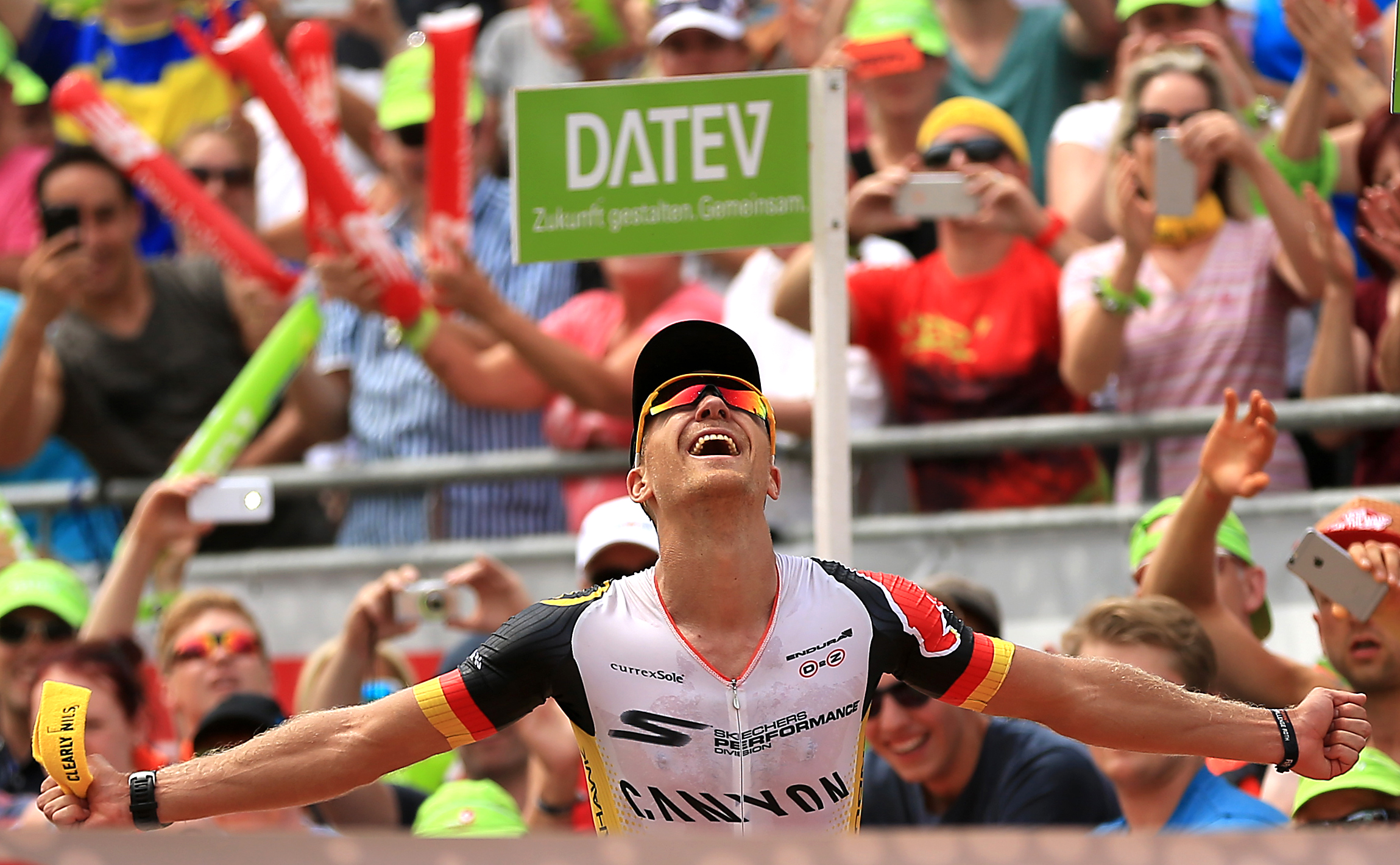 Nils Frommhold (GER) and Yvonne van Vlerken (NED) stole the show today at DATEV CHALLENGEROTH with two outstanding wins in a race that also delivered a new bike course record and record crowds of over quarter of a million spectators.

As in 2014, Frommhold and defending champion Timo Bracht (GER) dominated CHALLENGEROTH. However, this year, the roles were reversed. British athlete, Harry Wiltshire led the men out of the water in 47:24 but just 14 seconds separated the top 10 with Frommhold in 5th and Bracht in 9th. It wasn’t until the start of the second lap that renowned bike specialist Andrew Starykowicz (USA) and Frommhold managed to break away from the group, putting four minutes over them by the 120km mark. This lead steadily grew with Frommhold leading into T2, 1:41 ahead of Starykowicz and with Bracht trailing by 11:20.

Despite his 11-minute deficit, Bracht mobilized his reserves and by the 12km point he had Starykowicz in his sights but had still only managed to take less than a minute out of Frommhold. After moving into second, Bracht continued to eat into Frommhold’s lead, but the young Berliner held on to take the win in 7:51:28, 5:03 ahead of Bracht. David Dellow (AUS) rounded out the podium in third and in doing so achieved a personal best, going under the magic eight-hour mark in 7:59:28.

Frommhold was overwhelmed by the ‘win of his career’. “My bike performance was really strong and this was why I suffered on the run quite a lot,” he said. “From 12km I had to take some walking breaks and I was not really able to enjoy the last 3k which was disappointing as there were so many more spectators than last year and I couldn’t enjoy them as much as I wanted. I had the feeling from the swim that this day could be my day – this year’s race was pretty much the same as last year except I had more time ahead in T2 – last year I had five minutes, this year I had 11 so only a big mistake on the run could prevent me winning. This win means a lot to me and may take a few days to realise what has happened!”

In the women’s race, Laura Bennett (USA) was first out of the water in 47:38, exiting with the lead men with Beranek 1:42 down in second place. Beranek’s power on the bike soon came to the fore with her taking the lead by the 30km mark, a position she managed to hold into T2, despite Carrie Lester (AUS) and van Vlerken halving her lead by the end of the bike. This lead continued to diminish and by 12km Van Vlerken had overtaken Lester and run into second place and reduced Beranek’s lead to just over a minute. The Flying Dutchwoman looked set to live up to her name and once she took the lead just before the 21km mark there was no stopping her, taking her third CHALLENGEROTH win in 8:50:53.

“I think there’s just one word for today – gratitude,” said Van Vlerken. “I’m just very happy I could put it together, even when the circumstances were not ideal. I felt really good until I had a bee sting earlier in the week which caused me a fever and I was totally devastated yesterday as I wanted to win so badly. I didn’t even know if I could start and I’m just so happy that I could bring it home. I was suffering on the bike, Carrie rode off and I let her go. My legs hurt on the run as well but when you are winning you forget about the pain. The spectators wouldn’t let me walk, every time I wanted to they yelled at me to keep going! They carried me through.”

Meanwhile, behind her, Lester was chasing Beranek down, catching her at round 30km and securing her second place at her first CHALLENGEROTH. “The hotspots, the finish line, all these things that people tell you are so amazing about Roth, you really can’t imagine how amazing it actually is until you are running and riding through it,” she said. “I didn’t expect my day to turn out the way it did, I hoped it would but when I got into that stadium, it was the perfect end to an almost perfect day.”

Beranek’s third place in 8:55:19 earned her the title of German National Champion.

In keeping with CHALLENGEFAMILY’s commitment to anti-drafting, CHALLENGEROTH, introduced a new drafting penalty system that saw the addition of a 1km penalty loop at 28km on the run for all those caught drafting. This action resulted in the number of drafting penalties being reduced by 50% from the previous year and all athletes serving their 1km penalty look on the run without complaint.

As well as the new bike course record, there were also record spectator numbers at 260,000 and also a record number of volunteers helped out with the event, over 6,000 from throughout the region.

A detailed look at the Ventum, the new triathlon specific superbike