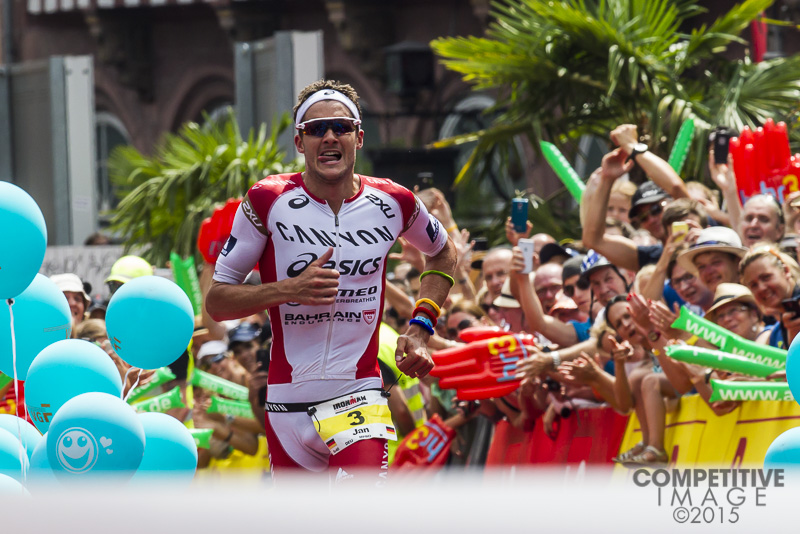 Just as diamonds are created in immense heat and pressure, Bahrain Endurance 13 athletes Jan Frodeno and Daniela Ryf were flawless under the blistering Frankfurt sun in a top-caliber field to take their first Ironman European Championship each, smashing course records along the way.

Frodeno debuted over the Ironman distance here last year; the German had the fastest swim and run times but battled three flats ending up in third. There was none of that trouble this year as he came first out of the water, proceeded to build a tremendous lead on the bike, and held tough on the run to finish in 7 hours, 49 minutes, 48 seconds, a dazzling feat in the punishing conditions.

Not only did Frodeno break both the overall course record defending champion, countryman, and Bahrain Endurance 13 teammate Sebastian Kienle set last year, but he also broke Kienle’s bike course record. “I didn’t know how fast I was riding, but obviously paid the price a bit on the run,” Frodeno said at the finish, despite his speedy 2:50 marathon in the hot conditions. “The last lap was agony.”

Kienle arrived 11 minutes later, the reigning Ironman world champion collapsing and being given a refreshing ice-cold dousing by Frodeno. After exiting the swim five minutes behind, Kienle rode himself into second place and held onto that position on the run, despite losing his nutrition on the bike. “The hardest race I’ve ever done… right now have to say that,” he said. “I just did all I could. I felt like Icarus, with his wings coated in wax, flying too close to the sun. On a day where Jan had such a great performance, I just wasn’t allowed to have any weaknesses.”

It was a total German sweep of the men’s podium with Andy Boecherer taking the final spot.

Ryf gave a polished performance in her first appearance at Frankfurt. While it was teammate and fellow Swiss Caroline Steffen who exited the water first, Ryf was only four seconds behind her and both stayed in the lead pack on the bike. Ryf moved to the front a quarter of the way through and picked up the pace, with chasers eventually falling back giving her a seven-minute margin leading into the marathon.

Even in the 37-degree heat, Ryf held onto that lead, finishing 11th overall in 8 hours, 51 minutes, 24 seconds, breaking the course record set by the legendary Chrissie Wellington. “It was such tough conditions today. I had a lot of respect,” said Ryf. “For me to have a win and such a good performance makes me happy and also really confident for Kona. I’ve worked on my nutrition a lot. Today was my fourth Ironman, and I finally felt like I got everything sorted.”

The women’s podium was a Swiss sandwich, with Germany’s Julia Gajer coming between Ryf and Steffen.