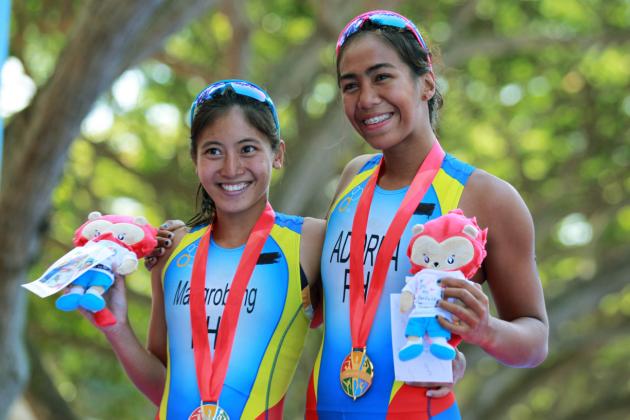 Triathlon Philippines had a special day at 2015 SEA Games held in Singapore (East Coast Park) on the 6-7 of June, with 3 medals (2 gold, 1 silver), validating our pre-race predictions.

The women’s race saw Maria Clare Adorna winning the event wire-to-wire,  with the day’s best swim in 18:45 and the day’s best bike in 01:05:14, Maria had almost a four minute gap to the chasing pack which included her team mate Marion Kim Mangrobang and Malaysia’s Irene See Win Chong.

In the men’s race, Thailand’s Wutthiwat Hemwet set the pace for the whole race early on, with the day’s best swim in 00:18:48 he had a gap of over thirdty seconds to the Singapore chasing pack that consistent of Willie Loo and Sheng Ren Chow and another minute on the second chase pack of Thailand’s Thanongsak Manchai and Jonard Saim. Malaysia’s Rikigoro Shinozuka was on his own another twenty seconds back.

On the bike, Wutthiwat managed to hold onto his lead but by the time he reached transition two, it had shriked to fifteen seconds, the chase pack of 7 athletes had now all others pre-race favorites.