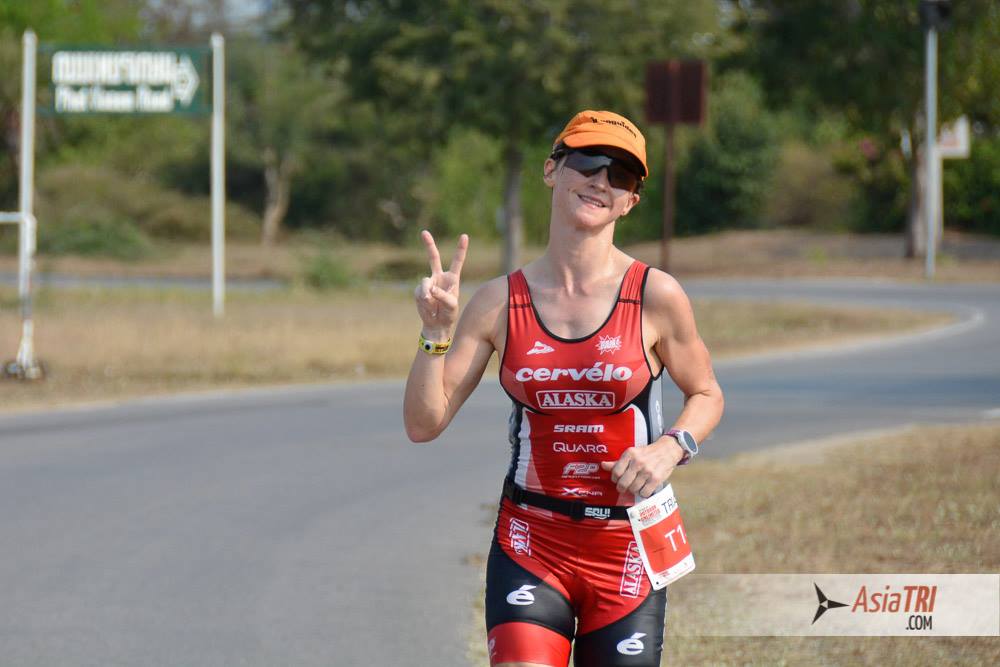 If you are training for your first ironman, your only and main goal should be to complete the distance. Anything other than that is a bonus, no exception. To have any performance goals on your first race is a very risky strategy, since you will be focus on the outcome of the race instead on executing the important steps to do the best you can.

However, once in a while some first timers can do extremely well in their first attempt, the story below is from Lyndsey Fraser, a Scottish national living in Bangkok and working full time as a teacher, who I coached to her first ironman in Taiwan 2015. Lyndsey won her age group (F25-29) by less than one minute and took her qualifying slot to the ironman world championships in Kona, Hawaii Lyndsey triathlon CV was already respectable before the Ironman, a 10th at the 2014 Ironman 70.3 World Championships and unbeatable on her age group in Half Ironman (and Challenge) races she had done in the previous year.

This of course brings some extra pressure and goals to an ironman debut, but the goal had never been to win the thing, and that became even more of a fact when on the start list there was a Japanese athlete named Chino Nishimura, 6th place at the Ironman World Championships in 2014 and Top 5 overall at both Ironman Japan and Ironman 70.3 Japan. Chino is a very consistent athlete and was only ten minutes off a 3rd place at the world championships, so a world class age grouper any day of the year.

Beating an athlete like this on your first Ironman is anything but an easy task. Race day strategy didn’t change at all with Chino in the race, the plan was still to race at a slightly conservative pace, to have a positive experience and of course finish the thing. A Kona slot or win would be a bonus.

Swimming in an ironman is often underrated, most athletes only look at it as taking ten percent of the race length, thus should invest only ten percent of the training time and effort into it, another common mistake is to look into the opportunity of minutes saved in the swim leg, which will always be small numbers, someone swimming one hour and ten minutes need to work very hard, likely for a full year, to improve five minutes, while that improvement will come a lot easier on the bike or on the run.

While the bike and run does offers better improvements opportunities, swimming fast has an impact on the rest of the race in two different ways:

At a high level, both amateur or professional, an ironman isn’t a solo time trial effort anymore. Swimming with a pack of experienced and strong bikers is a key component at any athlete that wants to do well. Even the race being non-drafting, one can still benefit by riding in a pace line, outside the drafting zone by saving five percent of the wattage needed for the same speed. This isn’t cheating by any means, you are respecting the rules and racing smart. The second benefit is the mental effort that is required to hold a certain effort, by having other athlete guiding you, it saves you that effort to when you really need (the run!), it is much easier to just focus on staying within the legal distance from an athlete, rather than set the effort on your own.

Once done with the swim, the fatigue from one hour of work won’t disappear, in fact it only accumulates. While an athlete may be able to get out of the water at a decent swim speed, it doesn’t mean that athlete is swim FIT, and the pay back may come on the late stages of the run. Doing your long swims when training for an ironman is also your bike and run training, while not doing your training may result in your walking the run rather than running. This is triathlon, one sport, swimbikerun rather than swim+bike+run
–
The winning strategy

The key part of an ironman is the first third of the bike leg, especially the first twenty minutes. When an athlete get this early stage right, chances are everything else will also come at the appropriate intensity. The challenge to get this part of the course right comes from a combination of adrenalin from the race and also being a feeling the most fresh and rested one had been in the previous six months! Since you start in an ironman training plan, you are always riding fatigued, when race day comes you will be experiencing a new sensation, riding on fresh legs, this can be very difficult to adjust to, since what feels “easy” may in fact be rather fast to your ability. For this reason the instruction in the first twenty minutes is to “ride your bike as if you were doing the warm up of your long bike ride on the weekend”. On race day, while Lyndsey executed the plan very well, her main competitor Chino did the opposite and went out too fast, the third best overall female split for the first 55k actually, only a few minutes slower than Dede Griesbauer and a minute slower than Dimity-lee Duke. I couldn’t believe my eyes an athlete that experienced had done such a big mistake, the lead that at that point was at over twenty minutes didn’t worry me. No one can get away with starting the ironman bike too fast, the price to be paid is very high.
For the rest of the race we watched then Lyndsey sticking to a perfect plan and executing a negative split bike and running pacing, while every split over ironman live the gap was getting closer and closer, by the 32km mark it was less than five minutes, it took longer than I was expecting when Lyndsey reported only passing Chino Nishimura in the final kilometer to take the win in 10:23:04, only 56 seconds ahead of second place.
–
The key lessons from this race:

a) Stick to your plan regardless of your competitors, focus on race day execution rather than outcome
b) No one is unbeatable and everyone makes mistakes as unlikely as it may be
c)  Pacing is key during an ironman event, especially early in the bike