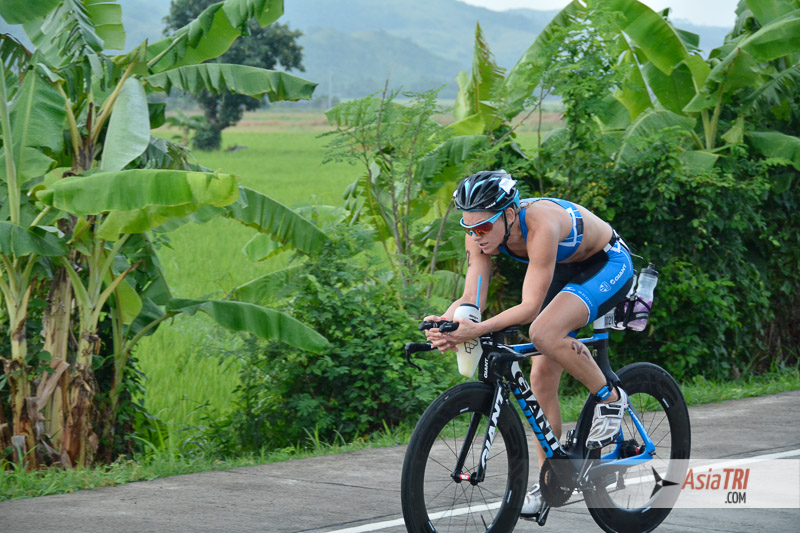 The inaugural Challenge Camsur was held successfully on on Sunday, June 14th – the event went as smooth as one can expect, as a combination of the experienced Challenge Philippines team, the local authorities that was also involved back in 2009 to 2011 when Ironman had a 70.3 event in the same venue and the hosting venue CWC (Camsur Water Complex) that was also the same venue for the old Ironman events. The below course review will help you get ready for the upcoming years events

A rectangle shape, two loop course made the swim very beginner friendly with a lane rope and several sighting buoys along the way.

Mike Philipps who is a world class triathlon swimmer led the swim segment in 00:26:10, indicating that the course was slightly longer (approx 2.1k), so if you trained hard for this race and didn’t improve much, now you know the reason. Another reason for a slow swim split is the lake compared to the ocean where most of the races are done, the water density makes the lake swimming more challenge as you don’t float as much.

Another bonus of the swim course is the opportunity to train on it in the days leading to the event which doesn’t happen often. The CWC complex also has two lap pools, so if you plan to get there early in the week, you have plenty of opportunity to swim.

The local Governor Migz Villafuerte promised and delivered roads fully closed on race day. It was impressive to see how well this worked on what was a very busy road in the days leading to the race, there wasn’t a single moped on the course on race day, with local policemen on every corner making sure the athletes had a safe course to ride at.

The organizers promised a FAST bike course and this is certainly the case. Race winner Brad Kahlefeldt rode a 02:07:39 bike split which shows how quick the course is.

In terms of suggested equipment to use, the course has some false flats but no hills, one can expect to send the whole bike segment on the big chain ring, you dont need a compact crank set and get a flat course cassete (ideally 11-21).

One interesting fact about the aid stations is that the water was served mostly on standard screw cap water bottles. This is in fact quite normal at races and can surprise some athletes, the ideal solution is to ride with an aerodrink in between your aerobars that can be easily filled, then carry your calories on a concentrated mix in a water bottle in your frame

June is the beginning of the rainy season in the Philippines and it was raining for some part of the day on the last few days leading to the event and also on race morning. It was still overcast on the swim and bike segment, but the sun came out during the run, adding an extra challenge to the athletes and slowing all athletes down.

Race winner Brad Kahlefeldt had the best run split of the day in 1h21, which is relatively slow for a world class runner of his caliber. And by the time the age groupers who started the race twenty minutes or more after the pros, went out running, it was boiling hot in mid-thirties Celsius. For that reason, be ready for a slow run split just like most hot races in South East Asia, but there’s also a chance it will be a wet day and this will speed things up considerably

A fun feature about this race is the support of local villages and schools. The kids were out for the bike and run course, the whole community gets involved in the event and the energy you gets from the kids is a nice boost during the event