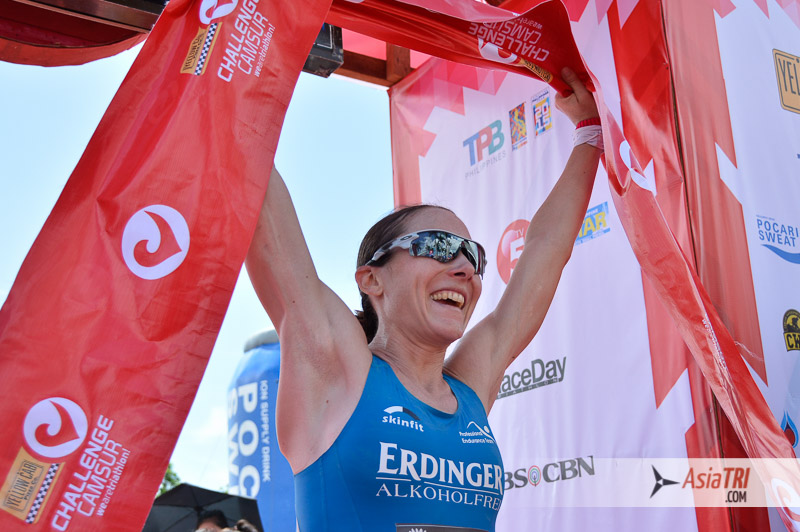 Australia’s Brad Kahlefeldt and Switerland’s Simone Braendi were the champions of the inaugural Challenge Camsur in the Philippines. Both athletes had a similar race day strategy by staying with the main pack in the swim and bike then outrunning their competitors.

A pack with all the pre-race favorites emerged together out of the water, in the lead there was Mike Philips (NZL) right on his feet four Australians, Brad Kahlefeldt, Michael Murphy, Mitch Kibby and mitch Robins. They had over two minutes on Matt Burtton, who won Challenge Philippines last year in Subic Bay.

On the bike Mike Philips quickly went to the front and set up a fast pace, managing to drop Mitch Robins who was one of the fastest runner of the field and is coming off a win at Ironman Japan 70.3 last weekend, Mitch Kibby crashed early on the bike but managed to get bac kinto it, however missing the main group. The group of now three athletes remained together until the 70k mark when Michael Murphy got dropped letting Kahlefeldt and Philips get to transition together in the first pace.

Kahlefeldt quickly set the pace, the Olympian triathlete opened a one minute gap in the first five kilometers and then just maintained his lead until the finish, coming in 03:56:33.  Phillips Managed to held onto second place in 3:57:35 while Kibby finished third in 04:13:25 Pre-race favorites, Swiss Simone Braendi and Radka Vodickova from Czech Republic had a comfortable lead off the swim on the rest of the pro women.

Once the bike, the duo remained together with Simone setting the pace up but Radka not far back. Australia’s Jessica Flemming and Renee Baker were riding in thirdand fourth place respectively, with Philippine’s duo LC Langit and Monica Torres rounding up the top five.

On the run, Simone quickly opened a gap to Radka, who is just recovering from a surgery to treat an injury, holding her lead to the finish and taking home the win in 04:17:42. Rakda held onto second place in 04:30:41 while Jessica Flamming rounded up the podium in third in 04:32:57.