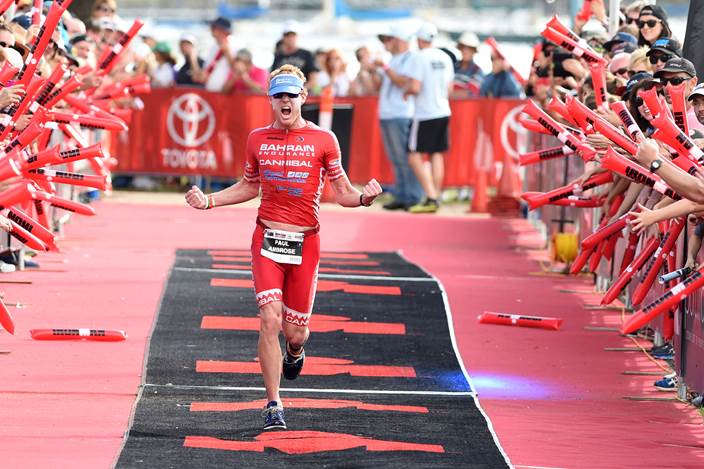 As befits the 30th anniversary celebrations, the honours were hard and bravely fought at the Toyota IRONMAN Australia in Port Macquarie today.

The men’s race came down to the wire with the 2013 champion Luke Bell within grasp as he ran down the leader, but fellow Australian and 2012 IRONMAN Australia winner Paul Ambrose managed to dig deep over the final 4kms to claim the title for the second time.

Meantime Australian-based New Zealander Michelle Bremer, who has battled with prolonged injuries that many would have given in to, ran down her rivals to win her second IRONMAN crown.

Kiwi Graham O’Grady edged Bell and 2012 world champion Pete Jacobs out of the water with the later pair stretching out on the bike before Ambrose forced his way through to claim the lead at the 135km mark.

Ambrose, who was runner up last year and third at IRONMAN Canada, worked hard to bridge the gap out of the water and claimed the lead late in the bike leg.

Bell and Ambrose gapped Jacobs who started to fall behind. Ambrose decided when Jacobs was gone it was time to turn on the jets, and built a seven minute gap to Bell as he entered transition.

“I was isolated at the start on my own, and in that first 40km Luke and PJ put some time into me. But I just stuck to my plan and tried to stay strong,” he said. I gradually picked them up and then ended up with a margin on the bike.”

“The last 45km of the bike I took it really easy, I didn’t want a death march on that run,” Bell said.

Bell had the word patient written on the top tube of his bike, and that was his mantra for the day.

Sticking to his plan he gradually ate into Ambrose’ advantage He was five minutes down at the halfway point of the 42.2km marathon run, and just over a minute down with 10kms to go. But as the catch seemed imminent, Ambrose dug deep and found some energy to hold off the change, going on to win in 8:35:52.

“I started getting splits that he was coming back, so I had a dip, started to dig deeper, kept going and then at 35km boom, big mushroom cloud and I ended up just battling to the finish line.”

Bell finished runner-up 2:40 back with Australian Brian Fuller third in 8:49:38.

Ambrose was delighted to claim his second IRONMAN title after a couple of years without a win.

“I’m happy to win the 30th, being 30 it’s awesome. I was losing time to Luke, but I was hoping to get a second wind, which I didn’t I just shuffled quicker,” he said.

“As soon as I realised this was the 30th I had to do this race, I didn’t make any plans for before this, no other races I wanted to give it the respect it deserved.” Last year’s runner-up Lisa Marangon enjoyed a one minute advantage out of the swim from a bunch of chasers. While Bremer forced her way to within a minute of the lead after the first lap of the challenging 180km bike, Marangon stretched the advantage ultimately to 2:36from former winner and Australia’s Jessica Fleming on to the run.

On the back end of the bike leg Bremer faded back to 5:30 behind, and started the run in fourth place.

Fleming, with a strong running pedigree, pushed to the lead by the 10km mark as Marangon withdrew, but gradually Bremer found her running legs. The 2011 IRONMAN Western Australia champion hit the lead at the 25km mark and from that point pulled away to win in9:38:23, with Fleming mighty impressive in runner-up 3:54 back and Australian compatriot Michelle Gailey third more than 12 minutes behind the winner.

“That was awesome to win. I won my first at IRONMAN Western Australia and it was so surreal, I didn’t know what I was doing that day and didn’t take in the finish line,” she said. “But I made sure this time I enjoyed every minute of it, I high fived as many people as I can, found my husband as well. It was awesome.”

More than 1800 athletes were out on course today chasing their own IRONMAN dreams.