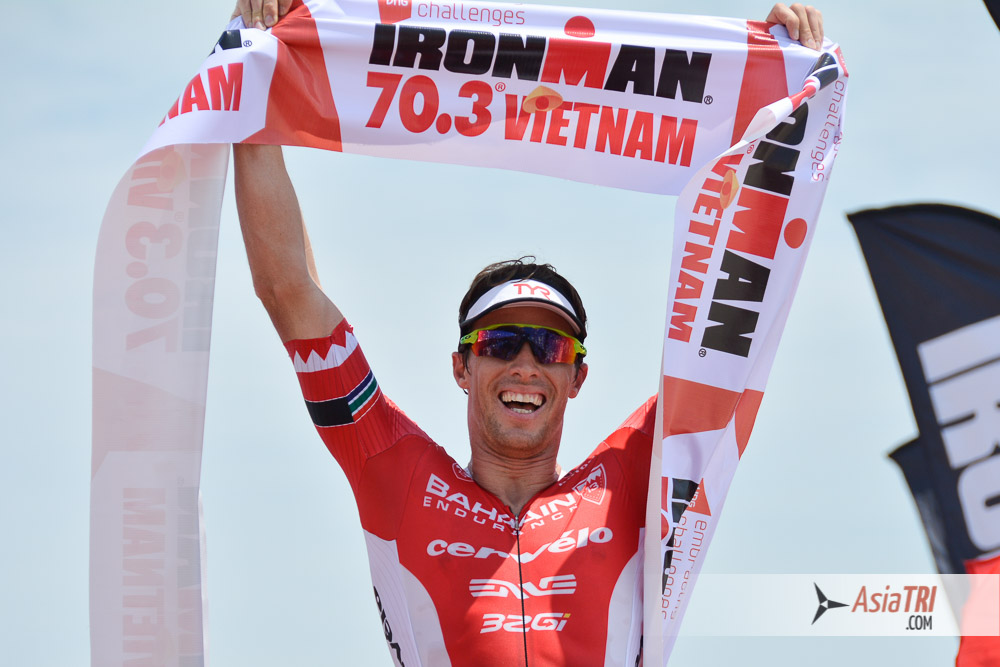 James Cunnama from South Africa and Caroline Steffen from Switzerland, were the champions of the inaugural Ironman 70.3 Vietnam. The race was held in Danang on the 10th of May covering the distances of 1.9k swim, 90k bike and 21k run. On the bike, Tim Reed attacked early  and with the day’s best bike split in 02:03:54 quickly bridged the gap to the leading pack, forming a new pack of 5 athletes. Half way on the bike the pack had an advantage of two and half minutes on James Cunnama, but the comfortable lead quickly shrink as Cunnama picked the pace up on the final third of the bike. By transition two, the leading five were still together with Cunnama only one and a half minute back.

Out of transition Cunnama quickly ran down most athletes but Tim Reed, the duo went head to head from the six kilometer mark and stayed together until the twelve kilometer mark, when Tim dropped off the pace and Cunnama opened a gap and secured his first win of the season in 03:51:29. Tim Reed held onto second place and Terenzo Bozzone was third Liz Blatchford from Australia and Caroline Steffen from Switzerland were out of the water together in 26:10 and they would then be pacing each other for the rest of the day. Belinda Granger was third out of the water another two minutes back.

Once on the bike, the leading duo rode together and maintained their lead. Caroline Steffen had the day’s best bike split in 02:22:27 and entered transition two only seconds ahead of Liz Blatchford. The head to head race didn’t end until about half way on the run, when Caroline was able to pull away from Liz and secure the win in 04:21:40, Liz came in second two minutes back and Dimity-Lee Duke was the biggest mover of the day and managed to close the podium in 3rd place. More in Featured
On the Trail with XTerra Pro and Thanyapura Coach David Ballesteros
March 28, 2017
Posting....