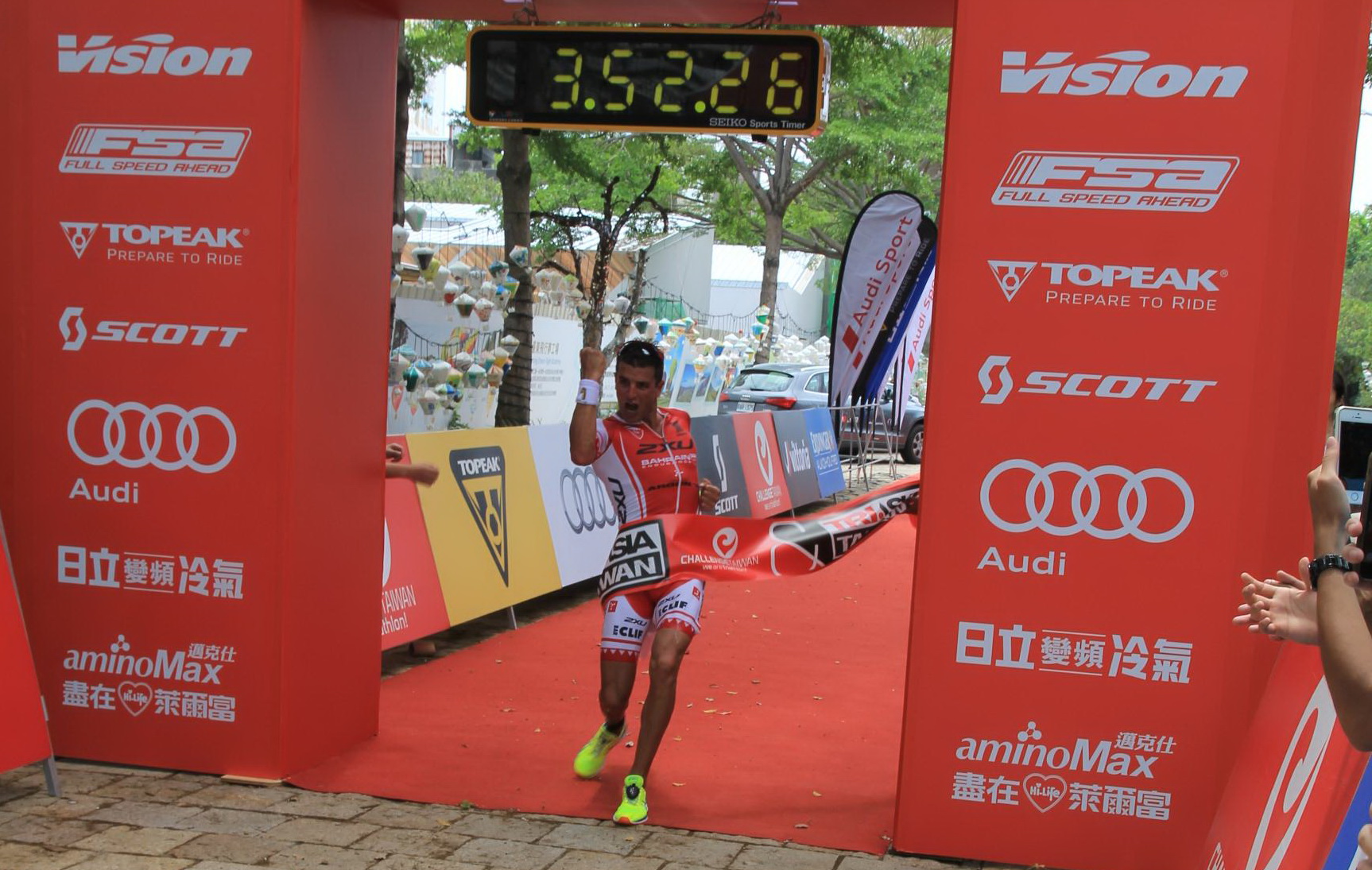 New Zealand’s Terenzo Bozzone continued his unbeaten 2015 record over the half distance today winning Challenge Taiwan. The 30-year-old was pushed all the way in the early stages but made his move on the run, eventually winning in a time of 3:52:31. Russian Eva Potuckova’s experience showed, recording her first win of the season from Kathryn Haesner in her first professional race and Australian Brooke Langereis in her half distance debut. In a great celebration for the Kiwi’s it was a clean sweep of the podium with Mike Phillips and Dylan McNeice joining Bozzone after the trio battled for most of the day at the head of the field.

“This was great, it was a tough day, I started running backwards at the last 3km I was just thankful I had a bit of space on Mike and Dylan.

Ideal racing conditions dawned on race day for 1200 athletes and that set up some a great battle in the professional field for the big crowds that turned out.

McNeice did what he does best and set up a 1minute 10sec lead after the 1.9km swim held in the clear and calm water reservoir. Eric Watson led the next group out that included Bozzone, Hamish Hammond (NZL) and Mike Phillips (NZL).

Bozzone and Phillips quickly set about reducing the lead to McNeice and the three came together just 20km into the rolling bike leg that snakes along the oceanfront. Hammond was the first of the chaser’s but already 2min 40sec down and Mitchell Kibby a further 2min adrift.

The New Zealand trio continued to forge ahead of the chasers, remaining in contact for the entire bike leg hitting T2 within seconds of each other.

Once onto the run the former world champion, Bozzone hit his stride and the lead, remaining uncontested for the 21.1km and winning his second Challenge half distance win following his win at Challenge Dubai.

“I think us three Kiwi’s we really gave it to the Australian’s out their today on the bike and built up a good lead so it will be interesting to see if we can have a Kiwi sweep on the podium on Anzac day celebrating the Australian’s and New Zealanders who fought in World War 1,” said Bozzone.

For 24-year-old Phillips he held off the more experienced McNeice to record one of his best results in world-class company.

McNeice was third today but was hoping it was a third title having previously twice won over the full distance but happy to be on the podium.

Brooke Langereis was the first to emerge from the water, but Eva Potuckova was just a few steps behind heading into T1.

Out onto the bike Potuckova started to build into her race and tempo, forging a minute lead from Langereis at the 20km mark. Kathryn Haesner, in her first professional race was over three minutes behind but putting in a good performance. Langereis rallied and bridged up to Potuckova at the halfway mark while Haesner also making up time slicing a minute off her deficit.

In the later stages Potuckova again surged and coming into the final changeover had a 1min 26sec lead from Langereis. Haesner was next to arrive, reducing her gap to the leaders to just 28sec and putting herself in a good position heading onto the run.

But it was the experience of the 37-year-old Russian who remained composed despite the battle behind her to grab her first win of the season.

“I’ve been here for two weeks now recovering and getting ready for this race after Ironman Taiwan.

“I really loved the bike course and just very happy to hang on for the win today,” said Potuckova

Haesner and Langereis ran shoulder to shoulder in the first half of the run, but Langereis eventually fell off the pace to leave Haesner to claim the silver on her debut as a professional.