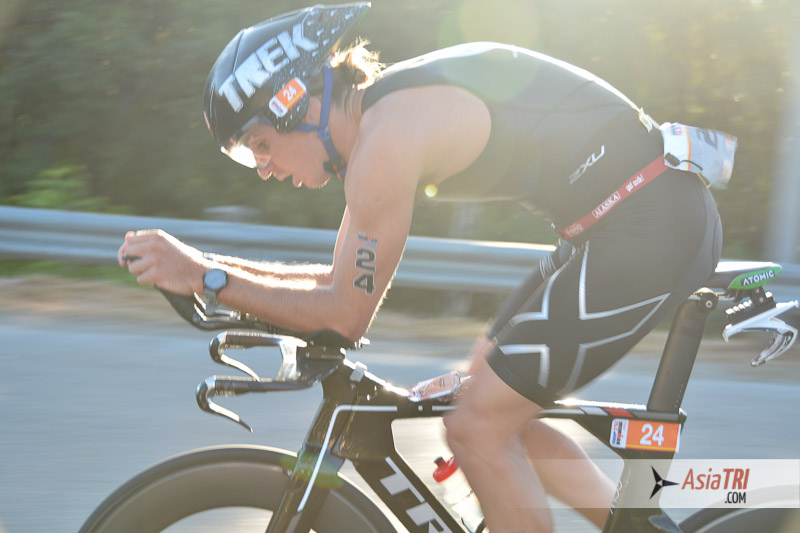 Mitch Robins is now a well known face in the Asian triathlon scene. Out of 4 races he did earlier in the year, he won 2 (Tri-United in the Philippines and Golden Triangle in Thailand) and was on the podium in the other 2 (2nd at Ironman 70.3 Subic Bay and 3rd at Challenge Subic Bay).

Mitch is breaking into the scene as one of the strongest runners in triathlon, his half marathon time at Ironman 70.3 Subic Bay was 01:18:57 and two seconds faster than winner Tim Reed. He also had the fastest run split at Challenge Laguna Phuket in November last year. Learn more about this Australia athlete who adopted Subic Bay (Philippines) as his base and what are his plans for the future in the exclusive interview for AsiaTRI

4. What’s next for you in terms of racing, both for the rest of the season and what are the long term plans? Short term – races include Challenge Taiwan, Davao Triathlon, Vietnam 70.3, Japan 70.3, Challenge Camsur and Bangkok Thailand Tri-League.

Longer term – I plan to be based here in Asia for at least this year and with the exponential growth of triathlon here in Asia it’s exciting. I will be racing a lot across SEA but with my position now I don’t have the luxury to choose a longer term race calendar.

1) Can you tell us about your background in the sport?

I grew up in Port Macquarie – home of Ironman Australia, so was inspired to take up triathlon when I was 19 (2008) as part of a team event in the Half Ironman. Running has always been my strength – I was a cross country runner from 5 years old, winning state and national titles during my junior years.

In 2010 I won my first professional race at home – Port Macquarie Half Ironman. In 2011 I raced the ITU circuit, winning races around Australia, Asia and Europe. Early 2012 I sustained a severe foot injury completely severing my plantar fascia and toe flexor tendons. After roughly 24 months of rehab I returned to competition with a win at Challenge Foster in 2014, and started 2015 with 3rd at Challenge Philippines, 2nd at Philippines 70.3 and 1st at Golden Triangle International Triathlon.

My training week changes depending on time of year and what races I have planned however roughly 25 hours per week seems to work well for me.

I aim for usually 2-3 quality bike and run sessions and 5 focused swim sets per week. Strength and conditioning in the gym is important to me, along with some ‘recovery’ or casual rides. I will always try and surf at least a couple times per week – yet to find any scientific evidence that this improves swimming performance but anecdotal reports are pleasing!

I believe consistency is key, so structure must be adaptable to keep you motivated and enjoying training.

3. You had several great results in Asian races this season. How do you evaluate your season so far?

So far so good – I haven’t been off the podium since returning to racing last November so I’m really pleased with my progress.

I’ve been very careful of not re-injuring my foot so my approach has been somewhat conservative yet consistent. I believe it’s easy to perform well for a short time but the key for me is to keep building though out the season so I can maintain a presence all year and really target the major races – perhaps 70.3 world champs, Challenge Oman and Challenge Bahrain.

See also:  Choose the Right Triathlon Coach for You

4. What’s next for you in terms of racing, both for the rest of the season and what are the long term plans?

Longer term – I plan to be based here in Asia for at least this year and with the exponential growth of triathlon here in Asia it’s exciting. I will be racing a lot across SEA but with my position now I don’t have the luxury to choose a longer term race calendar.

5. How’s life in the Philippines? We know you are training with Michael Murphy in Subic Bay and you are part of the Red Cross team. Tell us about the triathlon scene there.

Filipino life is really cool – I’m lucky to experience a new culture and have some great people here looking after me. Murph and I have raced here previously at 5150 events and decided that it would be a good place to start in Asia, with obvious natural beauty and great facilities while being close enough to Manilla for travel.

Team Red Cross Triathlon is the first coalition tri-team in the Philippines in partnership with the Philippine Red Cross. We are a not for profit organisation with the vision to educate and inspire Filipino triathletes and give back to the community through events such as training camps and school visits.

Thank you Mitch and have a great 2015 season!