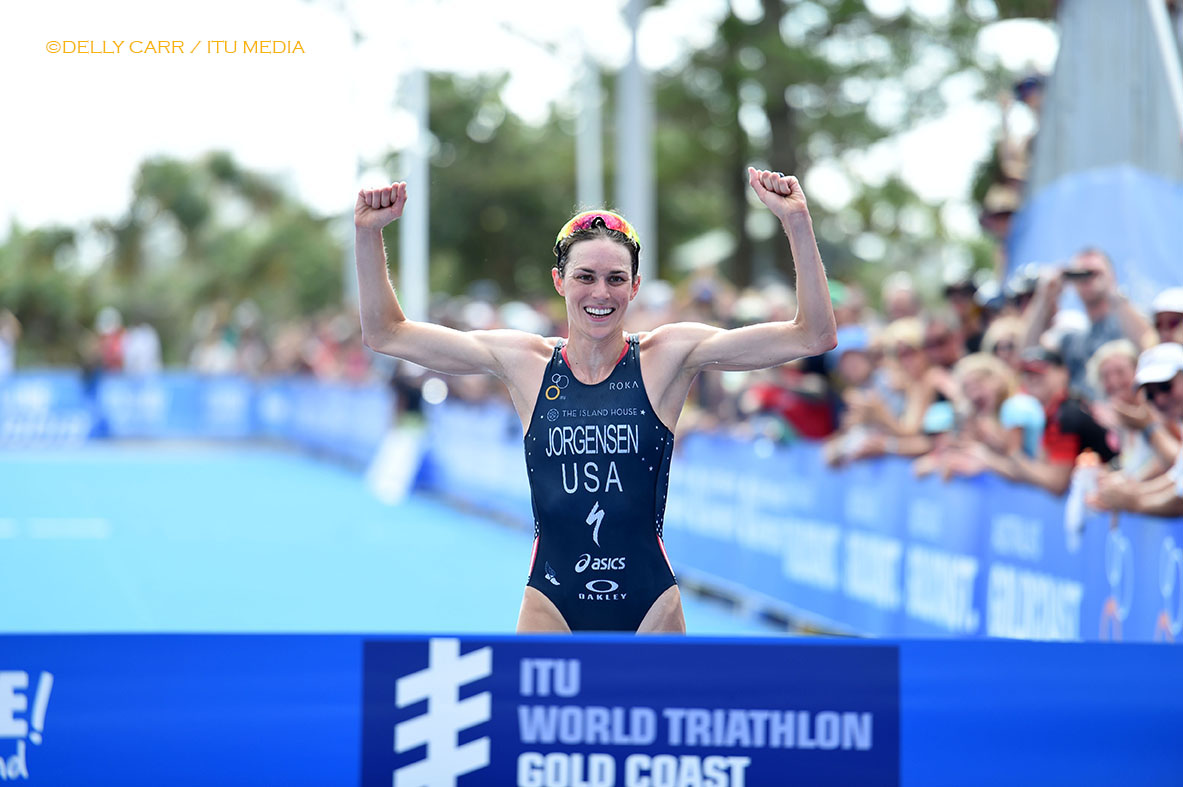 Jonathan Brownlee wins back to back WTS titles

Jonathan Brownlee returned to the top of the podium with a convincing victory on Saturday at the 2015 ITU World Triathlon Gold Coast, delivering him back to back wins in the series. He was the master, rallying the lead group on the bike to set himself up with the winning break he needed, stopping the clock at 1:46:53 and earning his tenth WTS win.

It was the first time winning Yokohama and Madrid back in 2013 that Brownlee had won consecutive WTS races.

“At the start of the season I had an awful race, it was a little bit of a shock really because I got a lot of things wrong so I knew I did not want to make those mistakes again. Today it started really well, had a great start in the swim, had to get around a few people to get on Richard Varga’s feet and then we had a gap, I saw the four of us and knew I just had to ride aggressive and on tempo,” said Brownlee. “

On my run I knew that if I could be steady and get them behind me by thirty then it was going to take a great run to catch me but luckily they didn’t.”

In almost a repeat of the 2009 ITU Junior Men’s World Championship race, Mario Mola claimed silver with the fastest run split (29:44). In 2009, Mola beat Brownlee to take the junior men’s world championship title. Spain’s Javier Gomez rounded out the podium, and in a great day for the men’s Spanish team, Vicente Hernandez came in fourth.

Under partly cloudy skies but temperate conditions, two-laps of a 1.5km swim was led out by the familiar figure of Richard Varga (SVK). Right on his heels was Brownlee, once onto the bike he established his role as the conductor, pushing the group of four that also included Igor Polyanskiy and Dmitry Polyanskiy (RUS) to make sure they worked together and kept the pace high for the majority of the eight-lap technical course.

They continued to extend their lead from the chase group that contained all the big names Javier Gomez, Mario Mola, Richard Murray but at the start of the six lap Igor Plyanskiy crashed going into a corner reducing the lead group to three. The second and third chase groups merged and set about reducing the one minute gap.

Murray, Benjamin Shaw (IRL), Brendan Sexton (AUS), Kristian Blummenfelt (NOR) Ben Kanute (USA), Gomez and Ryan Bailie (AUS) all contributed to the effort and at the final change the gap was down to a 21-second deficit and applying some pressure to the three up front.

Brownlee was the first to clear out and the first kilometre saw a group of Spainards including Mola, Gomez and Vincente Hernandez formed the group to set about chasing down Brownlee.

“That is racing, we were in the third pack in the beginning, we could not close that gap but Jonny was amazing today he did a lot of work on the bike and then ran like a maniac so congratulations to him,” said Mola. “I am very happy with my performance, I think it has been a great race for all of the Spanish athletes, we are doing well.”

Gomez grabbed the bronze medal and the last spot on the podium when he also pushed in the last lap to break away from Hernandez.

“It was very tough today. I felt better towards the end of the run but the first laps I struggled on the pace,” said Gomez. “It was kind of an average race out there for me, my swim was not great, it was not my best day but I secured a spot on the podium which is always good. Jonny was strong today and so was Mola.”

An uncontested run to the finish line saw Gwen Jorgensen (USA) grab another slice ITU history as she claimed her eighth consecutive WTS victory on Saturday at the 2015 ITU World Triathlon Gold Coast. The victory marked the longest-running WTS streak of any elite woman since the inception of the series.

Joining her on the podium were fellow Americans Sarah True claiming silver and Katie Zaferes bronze in a USA cleansweep that has not happened since the Australian’s Emma Moffat, Emma Snowsill and Emma Jackson achieved it at the WTS Hamburg in 2011.

“I don’t think you ever have a perfect race but I was certainly thrilled to come out of the water and be in the front pack right away. I mean one, two, three for Team USA, I don’t think you can get any better standing on the podium and looking over and seeing the other two girls and hearing the national anthem, we could not ask for anything more,” said Jorgensen.

“I look back and some of the triathlon legends and it doesn’t seem like I am at that level at all because I just try to come in here and do my best.”

Jorgensen wore the number two today after the number one spot was left unoccupied in a fitting tribute to the late Jackie Fairweather, who passed away in 2014. The golden bike rack was also left open to salute the spectacular Fairweather who was a dominating and well-celebrated name in the sport of triathlon.

A large chase group, led interchangeably by Andrea Hewitt (NZL) and Australia’s Ashleigh Gentle and Emma Moffatt remained at a distance of about a one-minute deficit from the leaders entering into the second transition.

Jorgensen held her own in the swim remaining in touch and with the lead group heading back into into transition right behind Jessica Learmonth (GRB) who led out. Her swim and bike skills continue to improve which is not good news for her competitors. Jorgensen played an active part in the front group with Duffy and True also driving the bunch that worked effectively together to ensure they stayed away throughout the entirety of the eight-lap technical course.

Her remarkable effort the first two disciplines set her up perfectly to then unleash her weapon on the run. She cruised across the finish line to earn the gold medal at 1:57:00. Despite having to serve a 15-second penalty for a transition infringement, Jorgensen still executed a standout run to keep her perfect 2015 season intact and win her third WTS race of the year.

True took home the silver medal with a time of 1:58:18, giving her the first podium finish of the season after she placed ninth in Abu Dhabi and eighth in Auckland.

“Last year in London, Gwen and I were one and two and I knew that Katie was a podium athlete so it was just a matter of time before we swept the podium,” said True. “But for those of us who are thirty-plus, it takes us a little bit longer to get warmed up in the season so I am just happy to be back up on the podium.”

The USA sweep was complete when Zaferes was able to grab third in a time of 1:58:36. The bronze medallist now has earned three for three on podium finishes in the WTS circuit for the year and shows no signs of slowing down anytime soon.

“I am super excited. When I saw Gwen and Sarah I knew I had to stay where I was because I wanted the all American podium,” said Zaferes.

Indoor vs Outdoor Running: What’s The Best Way To Train For Triathletes?
June 19, 2019