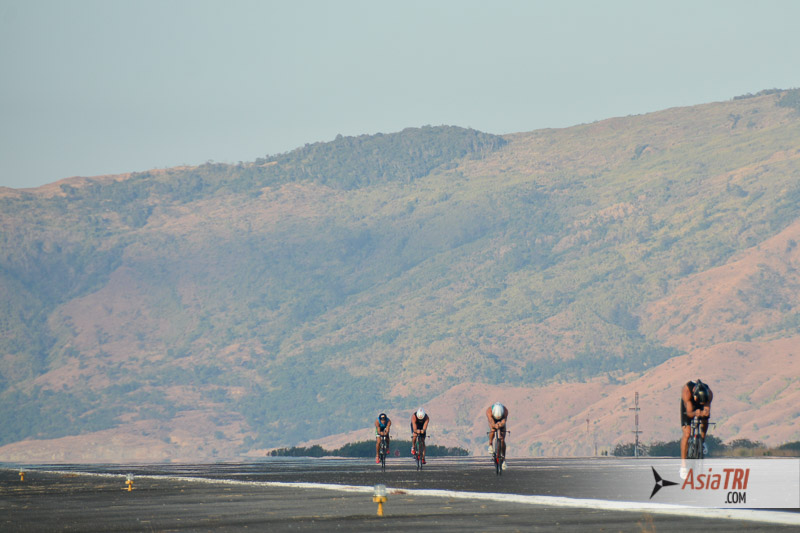 The inaugural edition of Ironman 70.3 Subic Bay was on March 8th and was organized by the experienced Sunrise Events Inc, who have been behind all Ironman branded events in the Philippines for many years now.

The race had the presence of many World Class athletes such as Craig Alexander, Caroline Steffen, Luke McKenzie, Tim Reed and Josh Amberger and it also gave the top age groupers, qualifying slots to the Ironman 70.3 World Championships. Subic Bay is a former USA navy base and its located less than one hour drive from Clark International airport which flies diriect to Singapore and many other international hubs, or another option is to fly to Manila, then its a three hour drive to Subic.

Learn more about the course below:

As straight forward as it can be, the swim this year was fast with Josh Amberger leading in the men’s field in just over twenty two minutes.

There’s enough separate wave starts to make this safe and comfortable enough to the participants, but at the same time still providing a race experience and requiring more strategy compared to the new system of rolling start which we are seeing at many races now. Keep in mind that once out of the water, there is a relatively long (300m) run uphill to transition one, save some energy for that part and expect your heart rate peak to be during that part of the day.

For the first 10km you will ride from transition area to the main highway passing through the airport runway which makes it pretty fun and exotic. Then once the main highway, its a fast course with some rolling hills. There’s one longer and steadier climb early on but it doesn’t require any special gearing or attention, just don’t expect this course to be all flat or too hilly. The last 5km or so is inside town and can be very technical or twisty. You then arrive in Transition two which is at a different location to transition 1.

Josh Amberger had the day’s quickest bike split in 02:04:12, which indicates a fast course and combined with a fast swim and moderate temperatures on the run (you heard it right!), it makes it one of the fastest half distance courses in South East Asia

When I headed to Subic, I was expecting another race in Sauna like temperature, but for my surprise it wasn’t that hot until about eleven in the morning. The fastest run splits also gives us an indication of how challenging the run is , the fastest run split was from Mitch Robins in 01:18:57, which is fairly quick compared to most other races at this part of the world. The run course is a straight forward, one loop, out and back course where you get to do a little of everything. You run through town, then into some trails, by the ocean and next to the airport, before doing an u-turn and running back to the finish line (and trasition area).