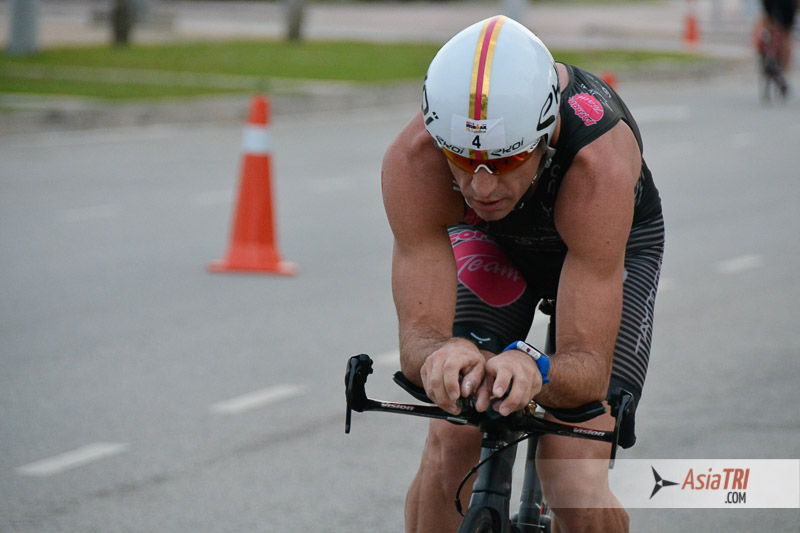 Domenico Passuelo from Italy and Dede Griesbauer from the USA were the winners of the Inaugural Ironman Taiwan. The even was held in Kenting, in the south of Taiwan and attracted more than 1.000 competitors.

Fredrik Croneborg from Sweden and Rod de Kanel from France exited the water together in 00:50:36, they had twenty seconds lead to ten times ironman New Zealand Champion, Kiwi Cameron Brown.

Once on the bike Domenico, who is a former professional cyclist from Quick Step, showed his experience and bike fitness and quickly took and extended his lead with the day’s best bike split in 04:32:16, he got to transition two more than eight minutes ahead of Fredrik Croneborg and Cameron Brown.

Domenico who just won Ironman 70.3 Putrajaya in Malaysia last weekend, showed he can also run and with a run split of 02:55:53 he held onto the win with a finish time of 8:25:55, Fredrik Croneborg had the day’s fastest run in 02:49:48  and finished second. Patrick Evoe from the USA overtook Cameron Brown for the final spot on the podium.

A pack of three swimmers, including pre-race favorite Dede Griesbauer, Samantha Morrison and Eva Potuckova, had a comfortable lead out of the water, their swim split of 00:51:05 gave them more than three minutes gap to Japan’s Maki Nishiuchi and seven minute on Dimity-Lee Duke.

On the bike Dede showed why she is a multiple Ironman Champion and world class athlete and with the day’s best bike split of 05:05:18, she had over twenty minutes lead to Australia’s Dimity-Lee Duke by transition two.

With that comfortable margen, Dede cruised to the win in 9:20:23, while Dimity-Lee held onto second place. Another american athlete, Kim Schwabenbauer, was third.

Ironman recovery guidelines: Learn how to get back into training