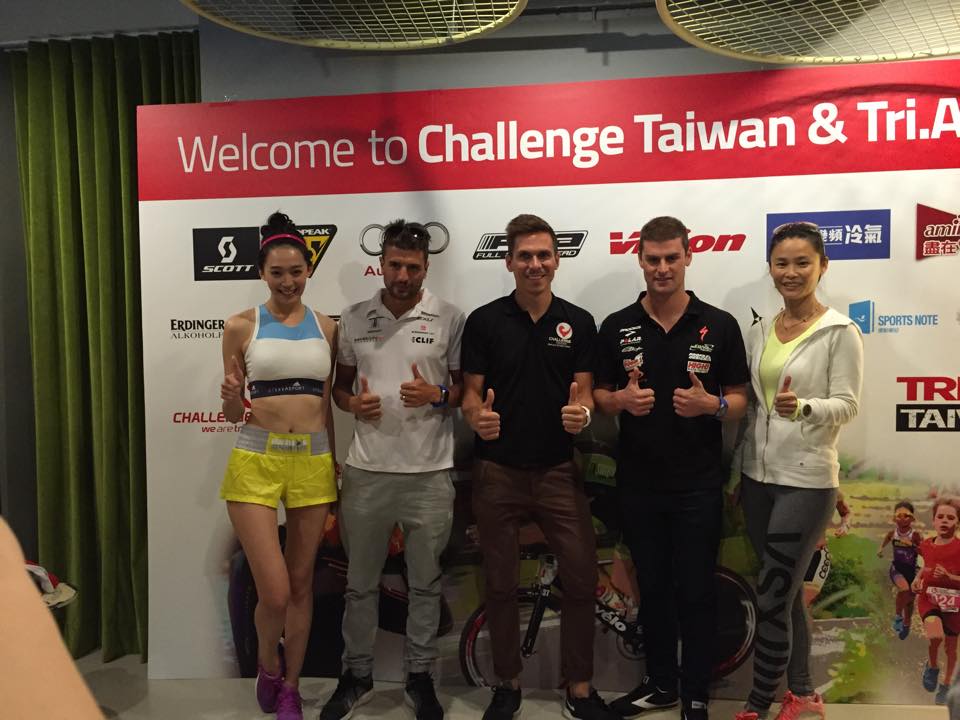 Race organizers today officially launched the start of CHALLENGE TAIWAN and on hand at WayPoint training centre were two of the world’s best athletes, Dylan McNeice, Terenzo Bozzone all taking part this Saturday at Taitung Taiwan.

It is the third edition of CHALLENGE TAIWAN, and with each year continues to grow in status, numbers and garner worldwide attention within the triathlon community.

CHALLENGETAIWAN Race Director Michael Dhulst welcomed everyone to this years’ event and said he is thrilled with the success of Challenge Taiwan in only two years.

“We have established the event as Taiwan’s premier triathlon festival, creating a weekend of activities for people of all ages and abilities while also hosting some of the world’s best triathletes.

“We are committed to bringing top athletes here, not only to promote our sport but enhance the age group athlete experience and creating a relaxed and fun atmosphere. Professional athletes bring a great sense of excitement and add great value,” said Dhulst.

Previously there has been a full and half distance race, but organizers have decided for 2015 to separate the events in order to best support the athletes. The half will be part of CHALLENGE TAIWANon April 25 with the full being schedule for later in the year.

The race has quickly established itself among the professional athletes who continue to return each year and is now part of the annual racing schedule.

New Zealand’s Dylan McNeice is just one of those athletes, undefeated at Challenge Taiwan over the full distance he will test himself over the half this year.

McNeice, has enjoyed a great start to the 2015 season, winning his third Challenge Wanaka title and backing up a week later to grab third at Ironman New Zealand.

McNeice returns to see what he can produce over the half distance in 2015 and a fan of the event since it’s inception.

“It looked like a cool course and a cool race and it has only exceeded my expectation’s the last two years,” said McNeice.

He will come up against his friend, fellow countryman who also happens to be one of the best half distance racers in the world in Bozzone and share his race expectations.

“Would love to win there again, but a podium would be nice,” said McNeice.

Bozzone has also had a dream start to his season winning the first race of the Triple Crown Series at Challenge Dubai and then a second place at Ironman New Zealand.

The former 70.3 World Champion will be tough to beat but credits NcNeice with part of his decision to race.

“Dylan said how great the course was over there that I had to try it out, also my body is feeling pretty good and I would like to keep up some good momentum leading into the season and racing in the Asia Pacific region is ideal,” said Bozzone.

Triathlon legend Chris McCormack is always keen to get involved with Challenge events and didn’t pass up the opportunity when invited to take part at CHALLENGE TAIWAN. He will be part of a relay team this weekend.

CHALLENGE TAIWAN will be held from Thursday 23 to Saturday 25 April 2015.