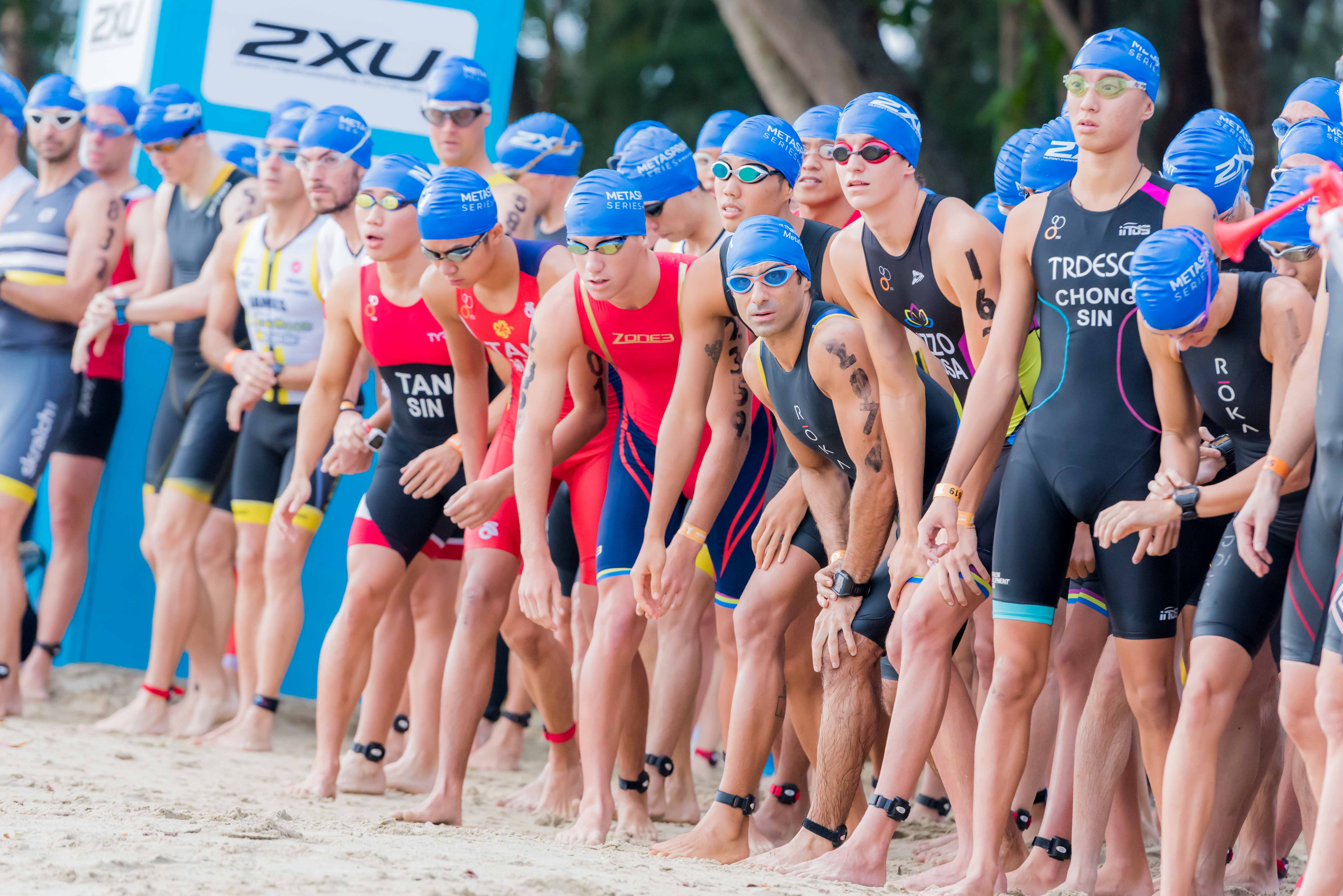 The Stars and Stripes were shining at the 2015 MetaSprint Series Triathlon as dominating victories on the day from Brett Izzo and Jacky Foley saw the Americans crowned overall series champions at Changi Beach.

The day didn’t start so brightly as the athletes awoke on race morning to a huge thunderstorm that caused a 45-minute delay to precedings. But in typical Singapore fashion, by the time the elites did get the action underway, the sun had reasserted itself and the sea was pancake flat, setting the scene for a marvelous morning’s racing. As the big crowd watched from the beach two swimmers had separated themselves from the rest as they rounded the final buoy of the 750-metre triangular course. The two seemed joined at the hip as they bore down on dry land and it soon became clear that it was Izzo and his long-time rival Bryce Chong. As the teenagers hit the beach and tore towards T1 the next person out of the water was Foley some 20 seconds back, followed closely by Aquathlon winner Colin O’Shea, but the traditional big guns, including Arnaud Selukov, Jonathan Ma and Tim Cosulich all found themselves at least a minute behind after the first leg of the race.

Izzo and Chong were still together as they hit the bike leg, a two-lap, 20km affair up and down the Changi Coastal Road. The 2015 MetaSprint Triathlon could well have been the last race ever on the iconic strip, which is soon to make way for the airport expansion.

Chong tried to stay with Izzo but the 17-year-old American is a much stronger cyclist than the Singaporean and by the beginning of the second lap was on his own. But danger lurked in the form of the powerful uber bikers behind, and Izzo’s lead had duly been whittled down by the time he reached the dismount line, with a hard-charging Selukov leading the charge.

Despite a seamless transition, Izzo hit the run course only nine seconds ahead of Selukov and with momentum on his side the smart money might have been on the Frenchman and former series champ to reel his younger rival in. The run course was over a flat 5km out-and-back track along Changi Beach and for the first 2km the gap remained stable at about 10 seconds as Izzo strode comfortably ahead, showing none of the tightness that saw him overhauled by O’Shea in the Aquathlon. Indeed, by the turnaround, Izzo had eked out another few seconds to stretch his lead to 15 seconds. Selukov too was running with great form, but at that 2.5m u-turn he saw that all of sudden Cosulich was back in the picture and bearing down hard.

But nothing was going to stop Izzo, and despite a few nervous glimpses over his shoulder down the stretch, the youngster held his form and gradually pulled further away and went on to win comfortably in a time of 1:03:33, with Selukov some 30 seconds back in second. Cosulich was third a further 12 seconds behind in third, a minute and a half ahead of the fourth-placed finisher, Duathlon champ Guillaume Rondy. Izzo’s win coupled with his second place in the Aquathlon saw him crowned series champ. The final standings are calculated on a points basis, with results from the Triathlon and the Aquathlon OR Duathlon counting.

While the young American was understandably exhausted after his triumph, he soon regained his composure and revealed how his simple pre-race strategy paid off.

“(There was) no real plan, just kinda go hard, give it 100 percent and see how it goes, that was really it,” Izzo said.

“I was working really hard on the bike, just trying to keep a gap on the old guys because I know they’ve got a lot of power. So I just hammered it and figured I’d do as much as I could and survive the run.”

He of course did more than survive the run, although he made the task of holding off Selukov sound simpler than it was.

“I just kind worked on my cadence and focused on just keep on moving forward,” he said, before answering in typical teenage fashion that it was “pretty cool” to have won the whole MetaSprint Series.

The new champ also revealed that his next race is a major international competition in Mexico in two weeks time.

“I actually fly out to the US tomorrow. I qualified earlier in March for the Pan-American Games, so I’m going to Mexico as part of Team USA,” he said proudly.

In the women’s race, having won both the Aquathlon and Duathlon, Foley went in as a big favourite, and she firmly underlined that status with her superlative swim, which gave her a two-minute lead going onto the bike leg. An equally strong bike leg resulted in Foley increasing her lead and made her 5km run up and down Changi Beach almost seem like a procession. Her winning time was 1:09:53 and the American was never troubled as she made it three wins out of three on her way to being one of the most dominating overall champions in the history of the MetaSprint Series. The runner up, Britain’s Vicki Hill, finished almost three minutes behind Foley, the five minutes she gave up on swim leg was always going to be too much of an ask. Holding on for third place, but nearly two minutes behind Hill, was Petro Kier of the Netherlands.

Foley was understandably happy to have clinched the series.

“It feels good to have won, I’ve never had a series win, I’ve never done anything like this so I’m excited about it,” she said.

She also revealed a similarly simple race plan as her countryman and fellow champ Izzo.

“My plan was to go as hard as I could. I had an idea I could win but I never assume I will win, I always have to go out and do it.”

“I really liked the (bike) course, it was flat, it was fast, but I took the u-turns a bit cautiously because of the wet roads. (On the run) I started off a bit harder until the turnaround until I could see where my position really was and then backed off a little bit,” Foley said.

Izzo and Chong have both progressed from the ranks of the MetaSprint Series Youths races, so all eyes were on this year’s contests to see what future stars were emerging from the ranks of the 12-15 year olds. Competing over a 250m/10km/2.5km course, the boys’ race saw a pack of six or so athletes hit the beach together after the swim. Among them were Aquathlon champ Russell Liew and Aaron Kiss, runner up in both the Aquathlon and Duathlon. But as they hit the bike course, it looked like it was finally going to Kiss’s day as he gradually pulled away from the pack. He left T2 40 seconds ahead of chasers Liew and Saryu Onishi, but the Australian soon stretched that lead by putting in the fastest run split of the day to win easily in a time of 32:19, 80 seconds ahead of the runner up. That honour went to Onishi of Japan who pulled away from Malaysia’s Liew in third.

The Youth girl’s race had a standout favourite in the shape of double Aquathon/Duathlon winner Sam Mcinnes, and the young Briton duly pulled off the treble and series title but she didn’t have things her own way.  Ann Marie Kohn was the first out of the water but the Czech girl lost that lead in transition and it was Mcinnes and Aaliyah Mataragnon of the Philippines who hit the bike course just ahead of her. Mataragnon soon showed she was the strongest cyclist in the field and hit T2 with a 30-second led over Kohn, with Mcinnes a further 10 seconds back in third. But onto the run course and Mcinnes found her stride in the blazing heat, quickly reeling in Kohn and then Mataragnon as she went on to take the title in a time of 37:17, a full 25 seconds ahead of the Filipina. Third over the line was Emma Middleditch of Great Britain.

The last but definitely never least races to take place were the Kids contests, for the boys girls aged 8-11 years old. Racing over a distance of 150m/5km/1.5km, Britain’s Samuel Compton emerged as the fastest boy, using a strong swim as a springboard to push onto the bike and run. His winning time of 22:17 gave him an almost minute winning margin over Austin Cocks of Australia, with Julian Lee of Singapore just hanging on for third from Keaton Russell of Canada.

Siobhan Doyle of Malaysia was the girls’ champion, with her bike and run legs being the tools that helped her most on her way to a clear-cut win over Natalie Hunter of Britain. Third place went to Zi Xuan Thong from Malaysia.

And so concluded the 2015 MetaSprint Series. The dates for next year’s Aquathlon, Duathlon and Triathlon, which will make up the ninth edition of the series, have already been revealed. Go to www.metasprintseries.com for full details and to take advantage of the 3-in-1 Very Early Bird prices before midnight Tuesday 5 May.

Looking for your next challenge? Bintan Triathlon registrations are now open. Visit www.bintantriathlon.com