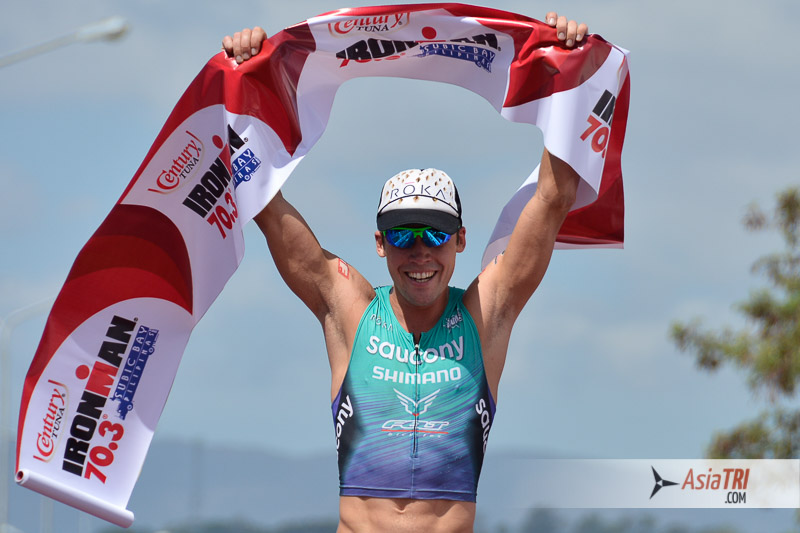 Australian Tim Reed and British Parys Edwards were the champions for the inaugural Century Tuna Ironman 70.3 Subic Bay in the Philippines. While some of the pre-race favorites such as Caroline Steffen and Craig Alexander didn’t start the race, the others put on a very tight race especially on the men’s side.

Super swimmer Josh Amberger from Australia led out of the water as expected, he exited the one minute ahead of the pack that included another three Aussies, Tim Reed, Mitch Robins, Tim Green. Luke McKenzie was another thirty seconds back.

On the bike Josh kept on extending his lead as he knew he had Tim and Mitch, two of the best runners in the sport behind him. By the 80km mark he had 3’15” on Tim Reed and Luke McKenzie and another 4 minutes on Mitch Robins.

On the run Josh was able to hold onto his lead until the 6.5km mark, when Tim Reed overtook him and never looked back. The biggest mover of the day was Mitch Robins, who managed to move to second place by the 12k mark. Josh Amberger held onto third holding back Luck McKenzie

Swiss Emma Bilham was first out of the water with over two minutes gap to USA’s Beth Gerdes and Australia’s Belinda Granger, and another minute ahead of Parys Edwards and Dimity-Lee Duke.

On the bike, Parys Edwards made the two minute deficit by the 20km mark taking the lead, from there onwards she only extended her lead and by the 80km mark she was 4 minutes ahead of Beth Gerdes and another 90 seconds ahead of Belinda Granger. Dimity-Lee Duke was close to Belinda in 4th.

Parys had a comfortable run onto the run but was still able to pull away from her competition, finishing the race 6 minutes ahead of Beth Gerdes. Dimity-Lee Duke was 3rd place.