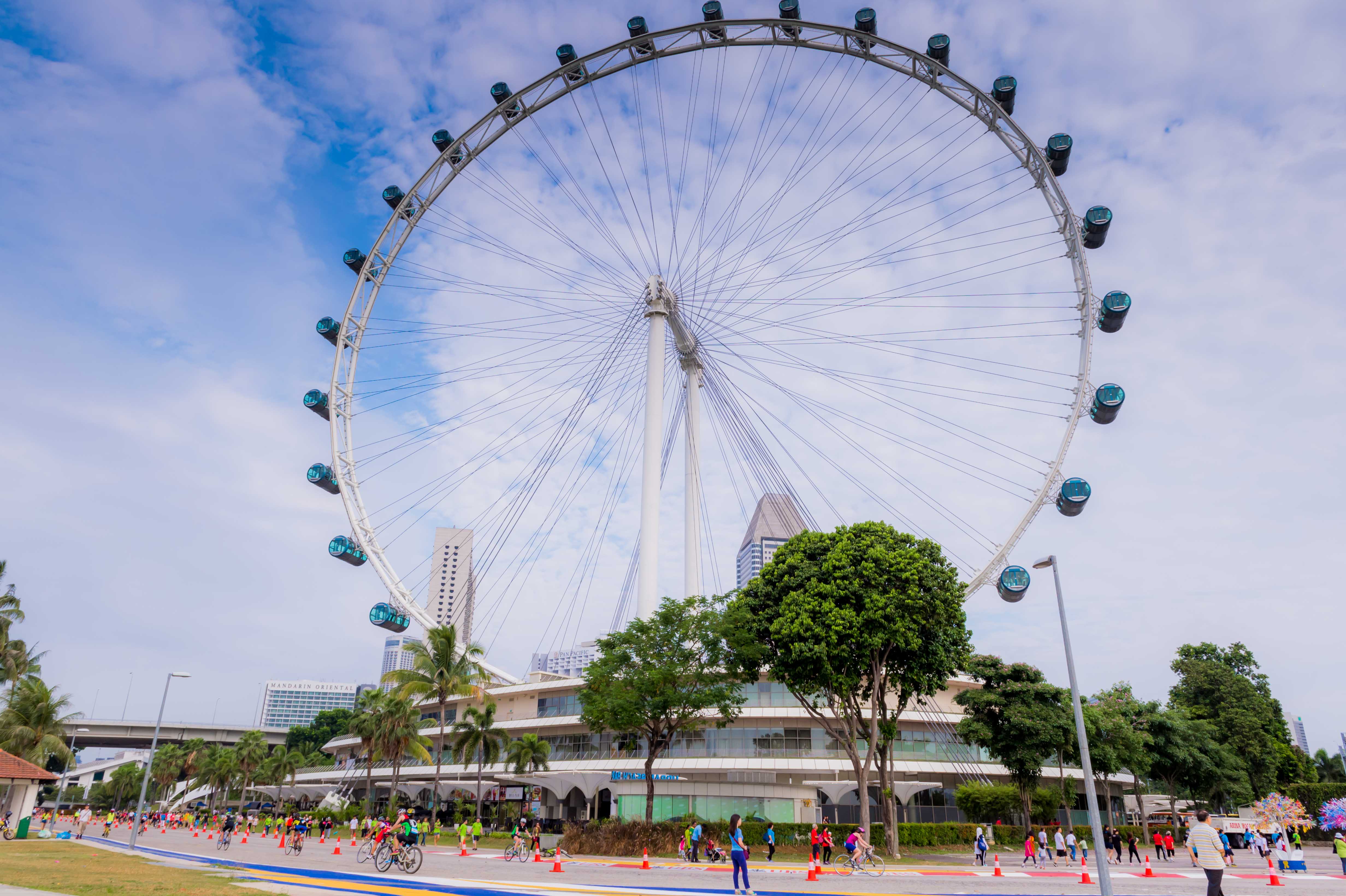 The 2015 MetaSprint Series Duathlon saw two thrilling finishes at the F1 Grand Prix track with Guillaume Rondy of France outrunning compatriot, former series winner and his own coach Arnaud Selukov to take the men’s title, while Jacky Foley made it two wins in a row as she held off a hard-charging Vicky Hill to add the run-bike-run crown to her Aquathlon triumph last month.

Dawn had just broken as the elite wave got the day’s precedings off to a blazing start and it was Charlie Epperson who left all his rivals for dead on the first 3km loop of the run-bike-run race. The American hit T1 a full 30 seconds ahead of the chasing pack, which included such leading local lights as Selukov, Rondy, James Middleditch, Tim Cosulich and young Bryce Chong, who led them the chasers into transition.

Onto the 20km bike leg and Epperson’s lead barely lasted the first of four 5km laps. The fast but scenic loop included the finishing straight of the Grand Prix circuit and took the riders past the Singapore Flyer as it skirted the Marina Bay and the Kallang River. It was Selukov and Rondy who snatched the lead from Epperson on the second lap and the two Frenchman had a ding-dong battle over the remainder of the bike leg as they distanced the rest of the field. They left T2 together but it was Selukov who opened up the first gap, taking a 20m lead within the first 500 metres. But Rondy had another gear and after making the catch at the 1km mark kicked again to open up a lead of his own. But multiple-time Kona qualifier Selukov doesn’t give up easily and he managed to keep the gap to a few seconds as the pair approached the final turn past the transition area and into the finishing chute. The younger Rondy still had plenty in the tank, though, and took the win comfortably by a seven-second margin in a scintillating time of 52:15. Behind, James Middleditch won the battle for third place, but the gap to Rondy of over a minute demonstrates how impressive the Frenchman’s performance was.

Epperson, incidentally ran the final 3km leg a minute quicker than everybody else but it was only good enough for sixth place overall. “I’ve done a lot training recently and I knew I’d place well,” he said. “[but] no, I didn’t expect to win today, it was a nice surprise.

Rondy described the pivotal moment of the race when he caught Selukov on the run:

“Arnaud is my coach so I know him fairly well, and his breathing seemed a bit heavy at that point, so I thought I’ll just go. A bit of tactics you know. I wasn’t too far in front but I managed to keep it up.

Looking ahead to the final leg of the MetaSprint Series, the Triathlon, at Changi Beach on April 5, Rondy didn’t exactly express confidence – “Well as soon as there’s swimming involved it doesn’t help me” – but with such potent bike and run weapons, Rondy is bound to be a contender.

The remarkable thing about Foley’s win in the women’s race was that it was her first ever duathlon. It was a storming debut which saw her take the bull by the horns right from the start and quickly establish a big lead over her rivals, arriving at T1 some 35 seconds ahead of the rest.

After winning the Aquathlon last month Foley had admitted her cycling wasn’t as good as her swimming or running, but she displayed no weakness on the bike at the Duathlon, and she maintained her lead over the 20km course. After putting in such a dominant first run the American looked odds on for the win.

But Hill had other ideas. Starting the final leg about a minute down, the English women set about the task of catching Foley and when she caught sight of the leader with 1km to go, it gave more fuel to her fire. Incredibly, she made the catch just as the completely unawares Foley approached the transition area, but Hill had burned too many matches in getting there and the American found another gear and sprinted down the finishing chute for the win in a time of 1:00:17.

Like the men’s race, the third place finisher was over a minute behind the winner, with Singapore’s YiweiLuo taking that final podium place ahead of compatriot Lim Baoying.

A buoyant Foley was delighted with her win and admitted to some pre-race nerves on her duathlon debut.

“I started off really nervously, not having a swim. And I’m not used to having to start off with a run, so I didn’t know what to expect from the other girls. So I just went out as hard as I could and just kept going hard the whole way,” she said.

“I was trying to keep my eye out for the next girl on every turnaround of the bike course because I can never get too confident on the bike, I have to assume that somebody’s right there behind me. But when I got into that fourth lap and I was still in the lead and I thought to myself, well I won the first run so I can win the second one.” It’s a safe bet she won’t make that mistake again.

“I actually let off a little bit [on the second run], not necessarily intentionally but my legs were tired. Then coming right in next to the transition area at the finish a girl did come up next to me but I had more left than I thought and so I was able to sprint and get the win from her, ” Foley said. “But that taught me a lesson.”

Having won both the Aquathlon and Duathlon, the American said she was looking forward to next month’s series ending Triathlon, but she knows there’s no room for complacency.

“Yes, I’m confident for the triathlon, but you never know who wasn’t here today who is going to turn up in the tri, so I can’t be over confident. But this win definitely makes me excited to go race that tri,” she said.

Like all MetaSport events, the MetaSprint Series wasn’t just about the elites, and well over 1,500 other participants took to the downtown course competing in Sprint, Discovery, Youths and Kids categories. The Youths faced a course of 1.5km-10km-1.5km and a large group of energetic boys aged 12 to 15 were stomping at the bit to be released from the start pen onto the course. A group of five boys, including Aquathlon winner Russell Liew and runner-up Aaron Kiss, had separated themselves from the rest as they entered T1, but as soon as the athletes hit the bike course it became a two-horse battle between Kiss and Jack Grant.

The tall Australian twosome put a minute into the rest on the bike course and hit the last run together. There were still only metres between them as they approached the finale and it was Kiss who turned the corner into the finishing stretch with the lead. However, some confusion as he passed the transition area unsettled Kiss and Grant came through for the win in a time of 31:16. Britain’s Oliver Trott was the third-placed finisher.

In the female Youths contest three girls, the Middleditch sisters Emma and Louisa, and Sam Mcinnes, matched each other stride for stride on the opening run leg and took a healthy lead onto the bike course. But the 10km bike leg split the trio, with Mcinnes proving the strongest cyclist, which allowed her to move onto the final 1.5km run 30 seconds ahead of Louisa Middleditch, with Emma a further 20 seconds back.

Mcinnes ran that final leg strongly to take the win unopposed in a time of 33:55, while Emma clawed back the deficit from her sister and went onto to take the runner-up spot some 30 seconds behind the champ. Louisa finished well clear of the rest in third.

Last but not least to race at the Duathlon were the boys and girls aged 8 to 11 competing for the Kids titles. They faced a run-bike-run course of 750m-5km-750m.

The overall girls champ in the Kids category was ZiXuan Thong who used a very strong bike leg to move into a lead, which she never relinquished. Her winning time was 19:47. Mia Amor Moreschini took second place while Chloe Mei Robinson just held on for third place.

The 2015 MetaSprint Series concludes with the Triathlon on April 19, where the overall series champion will be crowned as well as the titles for all the age group. The format of the MetaSprint Series sees points awarded for each race, but the final standings are based on a two-out-of-three basis, with results from the Triathlon and the Aquathlon OR Duathlon counting.

For full results from the Duathlon and to register for the Triathlon, visit www.metasprintseries.com.