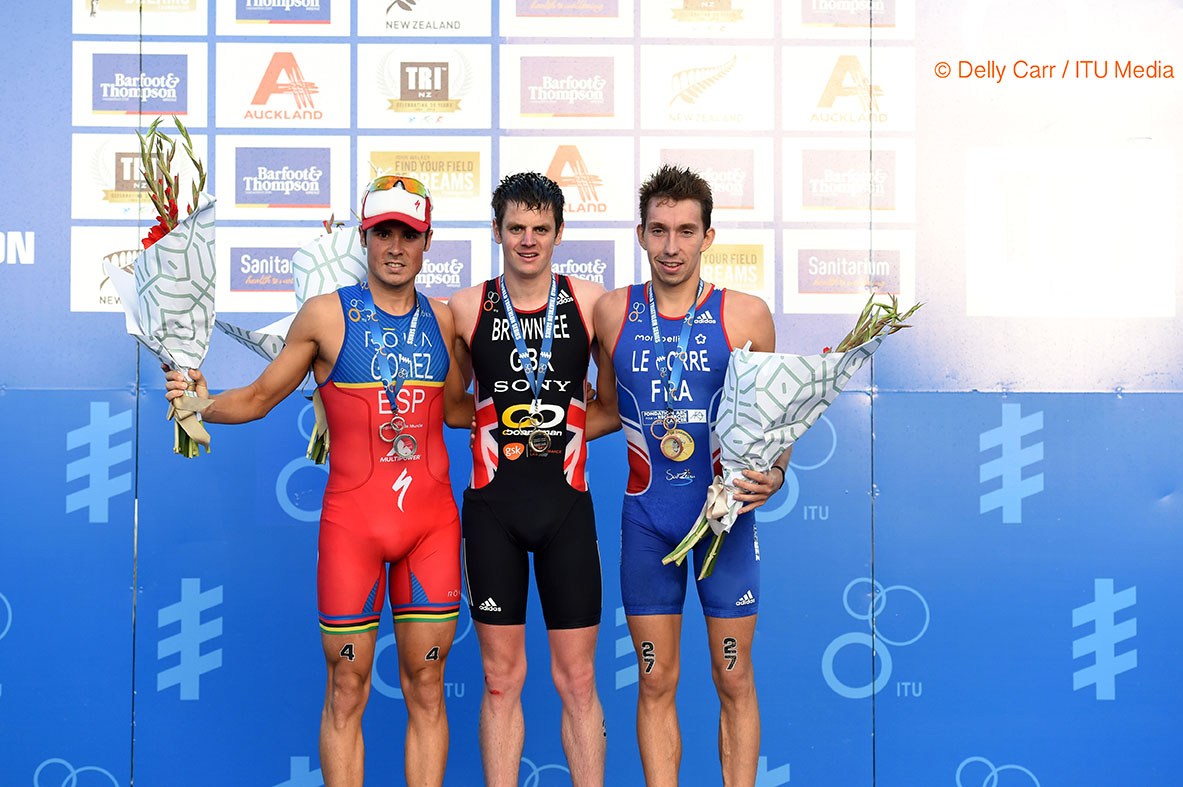 American Gwen Jorgensen finally got a long awaited win at the 2015 World Triathlon Series in Auckland on Sunday after three attempts. The victory rocketed the American to 10 WTS wins and cemented her place at the top of the Threedneedle leader board after her win in Abu Dhabi.

Also mirroring that first WTS race earlier in the year, fellow American Katie Zaferes was able to take home the silver medal with a time of 2:10:42.

Jorgensen emerged from the water with a 40-second deficit but her her effort on the early laps of the bike catapulted her into the lead group as she was able to remain their for the entire 40km before unleashing her lethal run. Crossing the finish-line at 2:09:04 with a lead of over 90 seconds, she earned her second gold medal and granted her the rights to an early perfect 2015 WTS season.
“I really wanted to be with the leaders in T2 so I am really happy that I was able to do that. I was able to execute with my run today but my main goal is to keep with front pack during the bike,” said Jorgensen.

A mild temperature and sunny conditions saw a group of about nine lead by Jessica Learmonth (GBR) andCarolina Routier (ESP) lead out of the swim with a healthy gap between them and the chase group, for the entirety of the 1500-metre swim.

After the first transition, a strong lead group was led by Lucy Hall (GBR) and Sarah True (USA) for the first couple laps of the bike. But entering into the third lap a huge push from the chase group caused the frontrunners to turn into a 21-women merger. The last part of the bike ride the leaders dwindled down to an 11-person pack that included Jorgensen, True, Lisa Norden (SWE), Andrea Hewitt (NZL) and Vendula Frintova(CZE).

Norden executed a strong performance on the bike as she brought herself back from a forty-second deficit from the water to be the leader on the bike for five out of the eight-laps. However she was forced to pull herself out of the race once she hit the run with Achilles trouble.

The three positions were determined early with Jorgensen, Zafares and Hewitt breaking away from the pack in the early stages. While Jorgensen took off on her trademark run, fellow teammate Zafares was able to hold onto a consistent pace to land her the second-place finish. New Zealand’s own Hewitt put in a monster performance to be in the leading group on the bike and dictated terms but was not able to match the leg speed of Jorgensen. A littering call made on the bike course also handed Hewitt a 15-second penalty, but despite the setback she was able to rally and take home the last podium position. Her third play today also secured her place on the New Zealand team for Rio 2016 as it doubled as a selection race for the home nation.

Great Britian’s Jonathan Brownlee finally ended the reign of Spains Javier Gomez Noya in Auckland today at the 2015 World Triathlon Series. Brownlee had not beaten Gomez on three previous occasions he was not to be denied a fourth time. A career best performance from Pierre Le Corre (FRA) saw him grab his first WTS podium.

Following a less than perfect start to his 2015 season he turned in a master-class performance over the tough and hilly course.

Remaining one of the athletes to beat throughout the entirety of the New Zealand course, Brownlee proved his gold-medal worth once foot hit the pavement and he secured a healthy gap that brought him into the finish-line. Adding a 10-second lead after each of the four-lap 10-kilometre run, he took home the top podium position with a time of 1:55:26.

“It was great to win today, first World Series event that I have won in a while. In Abu Dhabi I made a lot of mistakes and I have been beating myself up about it over the last three weeks and training hard because I did not want to do it again,” said Brownlee. “I felt good, I really enjoyed it today and I am pleased to win.”

63 athletes dove into the Auckland Harbour but it was no surprise to see the familiar sight of Richard Varga (GBR) at the front of the pack and first out of the water, a lead group formed crossing through the first transition that remained a tight pack until the end.

With the leaders becoming interchangeable, a 15-man lead group held a united front and stayed uninterrupted for all eight laps of the 40-kilometre bike discipline. The showcased leaders consisted of Brownlee, Thomas Bishop (GBR), Varga, Gomez Noya, Henri Schoeman (RSA) and Pierre Le Corre (FRA). The chase group, which housed New Zealand’s own Ryan Sissons (NZL) and the WTS Abu Dhabi gold medallist Mario Mola(ESP) could not close the gap and stayed behind by over 30 seconds.

Spain’s Gomez returned to form after his 6th-place finish in Abu Dhabi and earned himself a podium position. Despite not being able to catch up to the wind of Brownlee, in the final lap he broke away from Le Corre, who finished third, and established the silver medal. This is the first time in the four outstanding appearances in Auckland that Gomez has not placed first—he was the WTS Auckland champion most recently in 2014.

“Jonathan was just really strong today. I have been through a pretty tough time lately, I got sick right before Abu Dhabi and between that race and today I was taking a strain too so I am really happy with second place. Obviously I would have loved to win but I performed the best I could,” said Gomez. Another standout performer throughout the day was Richard Varga who lead the charge out of the water and then out on the bike. The strong swimmer was first out of the water and remained a constant competitor among the lead pack on bike, where he also entered with the top time entering the second transition. He finished in seventh place with a time of 1:57:07.