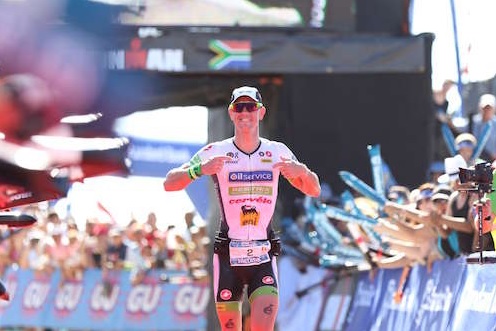 After leading the swim, an uncharacteristically circumspect display on the bike and measured run saw Britain’s Jodie Swallow, achieve an emotional victory at the Standard Bank IRONMAN African Championship. Earlier, Belgium’s Frederik Van Lierde put in a display which underlined his championship credentials as he slipped through the gears to get stronger as his race wore on, taking the title of IRONMAN African Champion in a world-class field.

Setting the tone for the rest of the race, Swallow proved unstoppable in the swim, covering the first kilometre in just 12 minutes, quickly catching up to the back end of the men’s field. She completed the swim with a time of 00:50:16. Denmark’s Camilla Pedersen and Czech, Lucie Reed, followed a further two seconds back.

Taking her early lead into the bike, it was expected that Swallow would push hard in an attempt to put daylight between herself and the chasers. However, Pedersen stayed within distance and made up time. Eva Wutti sat comfortably in third position for the majority of the first lap, but was overtaken by Germany’s Diana Riesler as they neared the 90 km mark. However, neither were able to catch up to the leading pair. Pedersen closed the gap to less than a minute and remained close heading to transition. Swallow pulled away slightly and was able to take a two minute lead into T2. Pedersen and Riesler followed in second and third respectively.

Swallow continued to look strong early on in the run and started stretching her lead. While Pedersen held her own in the first lap, she was later overtaken by both Lucy Gossage and Susie Cheetham, who moved into second and third place. Having entered T2 in fourth and fifth, the pair put in a strong run with Gossage, in particular, trying to make an attempt to catch Swallow with 6 km remaining.

Gossage could not repeat her feat of a year ago (she overtook the former IRONMAN 70.3 world champion in the closing stages of the marathon in 2014) as Swallow comfortably held out to cross the finish line in 09:26:55 to claim probably the most significant full distance win of her career to date. Gossage finished six minutes later in second, with Cheetham a further 2 minutes back.

When asked on her thoughts on the race, an exhausted Swallow exclaimed, “[I am] very satisfied with my victory, but my body is completely numb now. It [definitely] feels as if I have just completed an IRONMAN.”

It was Frenchman Sylvain Sudrie and Johann Ackermann of Germany leading the way in the swim. South Africa’s Kyle Buckingham kept pace with the leaders with Frederik Van Lierde on the shoulders of Buckingham. Van Lierde moved into third position before Sudrie emerged first in 49 minutes and 4 seconds. A group of 10 men all exited the water within a minute of each other with Ackermann in second, Van Lierde in third, Mike Aigroz (CHE) and Italy’s Alberto Casadei in fourth and fifth.

Bertrand Billard (FRA) and Buckingham made headway to move into the top four with Van Lierde and Sudrie. The quartet remained close throughout the bike, but Van Lierde upped his output after the first lap and opened a four minute lead by the 132 km mark. The Belgian powered on into the T2 and proceeded onto the run with a massive 13 minute lead over Buckingham and Bart Aernouts (BEL).

With Van Lierde in complete control, it was up to Buckingham and Aernouts to stake a claim for the title or be content with second place. While Van Lierde continued to push ahead, a fierce tussle was emerging between Buckingham and Aernouts who were running shoulder to shoulder. Spaniard Ivan Rana, meanwhile, was making headway after being fourth into T2. Buckingham tried, but could not get away from Aernouts, but Rana had managed to pass them both to move into second place as they started the second lap. Van Lierde was relentless, though, despite the sapping heat, and put in a masterclass performance. The 2013 world champion finished in a time of 08:16:34, followed by Rana 14 minutes and 9 seconds later with Aernouts claiming the final podium position at 08:35:58.

“I came to win in Africa, and I did,” said a confident Van Lierde. “Even though I didn’t break the record, I am happy with a win for now. Next time I will take the record.”

Van Lierde threw a challenge down for the rest of the season as he comfortably came up trumps in a highly competitive field.