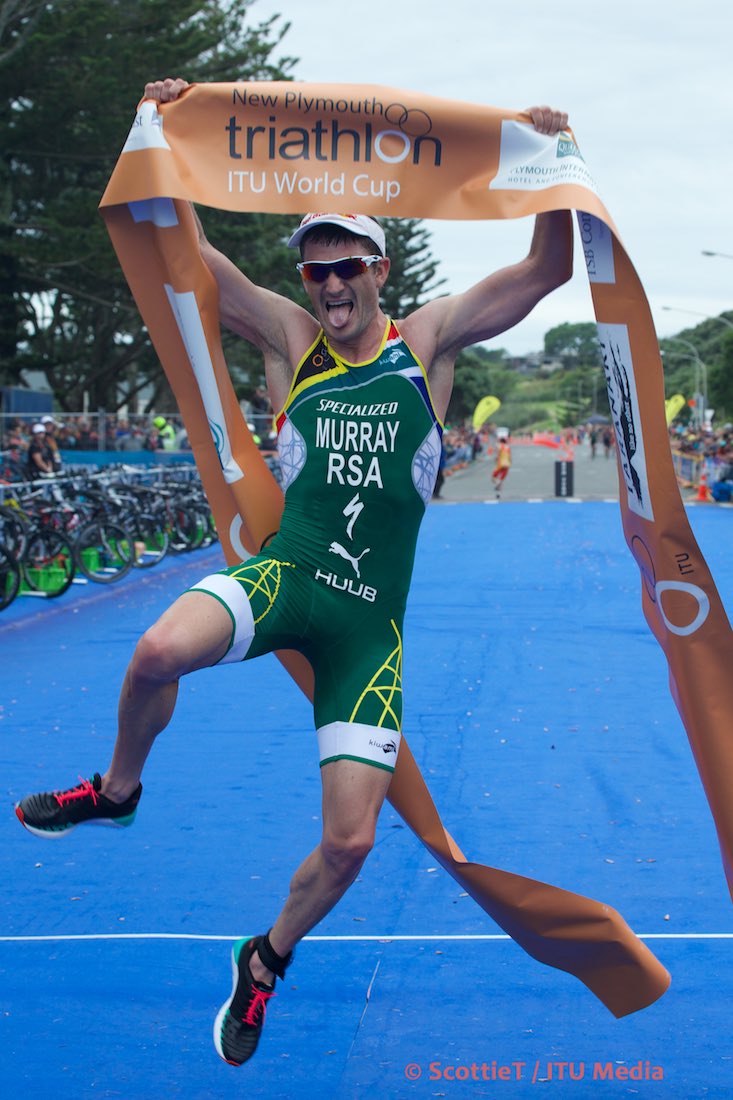 It It was a pair of firsts for Spain’s Tamara Gomez Garrido and France’s David Hauss, in the season opening ITU World Cup event in Mooloolaba on Saturday. In hot, humid and windy conditions, Gomez Garridos claimed her first career ITU World Cup win, while for Hauss it marked his first Mooloolaba win after five close calls.

Elite Women’s Review
The United States showcased its strength halfway around the world on Sunday as Kaitlin Donner and Renee Tomlin claimed the gold and silver in the Elite Women 2015 World Cup in New Plymouth. Crossing the finish line with a time of 1:00:18, Donner’s New Zealand win gives her, her first World Cup title of her career.

Under cloudy skies, cold temperatures and driving rain making conditions over the course difficult, the women’s race brought about a consistent large pack that formed early and remained together for the majority of the race. Donner, who remained at large in the lead pack throughout the last two disciplines, earned her World Cup crown in the final lap of the run after breaking away from Tomlin in the final stretch to end just a second apart.

“It was a great race. We had tough conditions this morning when we came out here and the swim was rough, but you can’t complain with the U.S. going one and two on the podium,” said Donner.

Earlier Carolina Routier (ESP) and Tamara Gorman (USA) led the field out of the sprint distance 750m swim. Then heading into a hectic and busy first transition, on the bike the first lead pack formed with Routier, Margit Vanek (HUN) and Yuko Takhashi (JPN) starting out as the driving force in the front group over the technical five-lap bike course.

Tamara Garrido Gomez (ESP) who was able to pick up her first career World Cup title last week in Mooloolaba, unfortunately fell in the first lap of the bike and was forced to exit the race.

A pack of about 17 held strong through the bike portion with Donner, Emmie Charayon (FRA), Ventula Fintova(CZE) and Sophie Corbidge (NZL) leading the charge. With the chase group holding onto a 14-second deficit, the frontrunners carried a performance together all the way through the second transition and leaving the separation of fate to the last three running laps.

As they hit the pavement onto the three-lap run course, Donner laid down the pace and stayed consistent throughout the remainder of the five-kilometre finish. Despite Tomlin’s effort to gain some last-lap momentum and close the gap between her and Donner, it was Donner who was able to cross the line first and claim the top podium position.

Donner said, “In the last lap I really had no idea where Tomlin was, really I was just building into the run like I did in Abu Dhabi so I was just trying to run my race and it worked out for me today.”

Tomlin crossed the line for silver today after the younger competitor finished with a time of 1:01:18.

“I am looking forward to a 10-K where I have a little bit more room, but it was my first podium finish in a World Cup so I am really happy with it,” said Tomlin.

Frintova claimed the last podium position after she was able to walk away with the bronze.

Donner placed 10th in Abu Dhabi at the start of the 2015 triathlon season, and her last podium finish was in the 2014 Tiszaujvaros ITU Triathlon World Cup where she took third.

Elite Men’s Review
A World Cup win has always eluded South Africa’s Richard Murray, but a perfectly executed performance at the ITU World Cup in New Plymouth delivered that for him.

It’s been a good start to the year for Murray after a third place at the WTS Abu Dhabi event and now a convincing win over a credentialed field in a dramatic finish.

In a race that was at full throttle speed from the gun Murray made sure he remained at the front of the lead group on the bike to avoid trouble in the slippery conditions. Not even a 10sec transition penalty he served impeded his win in a slick time of 52:38.

“It was quiet an interesting event today I came in and had a few wetsuit issues beforehand. One of the wildest first buoys I’ve been around.

“I was a bit under pressure running out of transition – I forgot my helmet then I realised they said I had ten second penalty,” said Murray.

In a sprint finish for second it was Russia’s Alexander Bryukhankov who got the better of 21-year-old Kristian Blummenfelt (NOR).

The rain had cleared but cool and windy conditions threw up a choppy swim, which suited Tommy Zaferes (USA) who took full advantage of a small shore break wave to led out the 77-strong field.

Caution was required on this tight and slippery course today and the 37 strong lead group stayed attentive the entire 20km. For the most part it was Philip Graves (GBR) driving the group each time they came through transition. Graves comes into ITU racing after a background in distance events and certainly dictated terms at the front.

Murray and Bryukhankov remained vigilant and in touch to put themselves in a good position coming into the last transition.

It was Murray to led the charge but in his haste dropped his helmet and incurred a 10 second penalty. Realising his mistake he laid down the pace and cleared out immediately to make up the time.

“I needed I knew I to be near the front of the bike to get as much of a margin as I could going out,” said Murray.

On the final lap he had built the buffer he needed – served the penalty and had plenty of time to still celebrate his first World Cup win down the finish line.

“I thought on the first lap maybe depending on the gap I’d stop but to me it’s more difficult then. I gave it the gas and on the last lap I thought it wouldn’t be as stressful as I was getting the splits,” said Murray

After a two year hiatus from the podium Alexander Bryukhankov (RUS) made sure he was at the head of the field all day, putting himself in contention and producing the form we know he is capable of to grab silver.

“I am very happy, this is my first podium after two years. This race was very hard for me to fly 30 hours. Maybe next race in Auckland will be good for me.

“I felt very strong on the run,” said Bryukhankov.

An impressive performance from the Norwegian Sprint National Champion, Kristian Blummenfelt to claim bronze in a close finish with Bryukhankov after a disappointing outing in Mooloolaba last weekend when he finished 18th.

“It was great, much better than last weekend. It was great to finally get a podium.

“Then on the bike on the first lap I tried to make a break happen and I worked really hard but didn’t happen. So I just saved my legs for the run,” said Blummenfelt.
> Full results