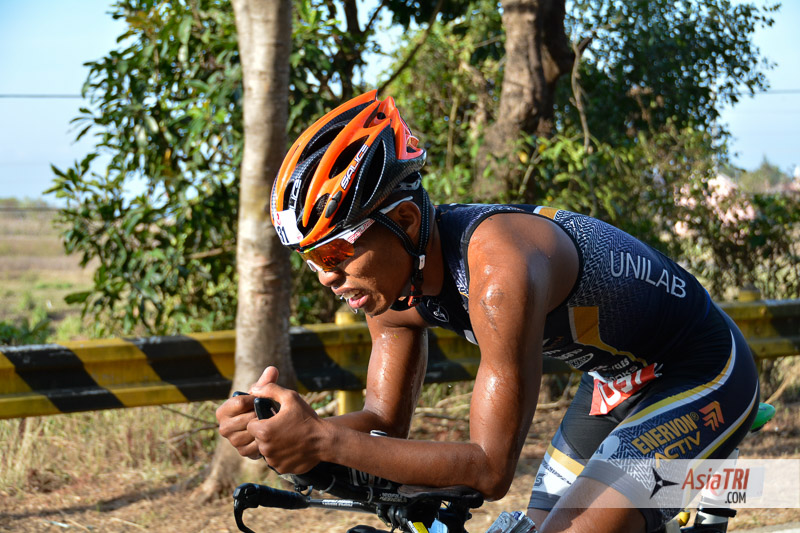 August Benedicto was the top South East Asian national at the Challenge Philippines in Subic this past Saturday Feb 21st, he defended his title from 2014 and took home a bonus of USD1.000.  August is known for a strong bikerun combo, his bike strength comes from years of being a bike delivery boy, and it was only back in 2007, he learned how to swim after meeting Ironman World Champion Chrissie Wellington, and back then TeamTBB Coach Brett Sutton. Learn more about this inspiring story below: 1. Congrats on your recent win at the South East Asia category at Challenge Philippines. It was a pretty close battle with Jaray Jearanai from Thailand, how did your day developed and when did you know you had the win in the bag?

Thank you. Yes, it was an exciting race. Actually, I was worried the days leading up to the race as I recently had a back injury but I just wanted to give the best. In the swim I could not keep up with Jaray and Smart and when I got out of the water someone shouted “5 minutes”. So I pushed hard on the bike and soon caught Smart and a little later Jaray. Ray and I stayed together until transition. I did a really fast transition to get a gap in the run and I started before him and Robinson Esteves. In the run I told myself to just keep going and not look back and not think about my injury. Only in the last 1km I turned my head to see if someone was behind me and when I couldn’t see anyone I felt safe.

2. Tell us a bit about your background as a triathlete and what got you in triathlons?

I was an ice-delivery boy and used to deliver thousands of kilos of ice on the bike. This brought me to professional cycling and then a friend asked me to try duathlon. Finally I was part of the Duathlon National Team and it was back in 2007, when I met Chrissie Wellington and was inspired to learn swimming and try triathlon.

Note: You can read more about me and my background on my website www.august-benedicto.com 3. Can you tell us what type of training load you do on typical training week leading into a Half Distance race? What are your favorite sessions on each discipline?

An usual training week might be about 25 to 30 hours but the week leading up to an important race is taper week and I slow down in volume. My favorite swim session is swim 500m-400m- 300m-200m-100m with paddles and pullbuoy, long bike rides with hills, and in the run it’s 21x800m with 200m easy jog inbetween.

4. Where can we expect to see you racing for the rest of the 2015 season and what are your long term goals?

This year I concentrate on all the local half-ironman races here in the Philippines, my next race will be Ironman 70.3 Subic in March. I like the 70.3 distance but I consider trying the full-ironman distance maybe within the next 2 years.

5. We know you spend a lot of time in Thailand training at Thanyapura. Where else are your favorites training grounds in Asia and where are you based in the Philippines?

I usually go to Phuket a couple of months every year to train with my coach Juergen Zaeck. But normally my training ground is in Subic Bay, where I’m based most of the time. I also like to train in my home province Tarlac and in Ilocos, in the northern part of Luzon. Video: How To Cycle Faster For Free – Ride Your Bike Faster With Less Effort
July 5, 2017