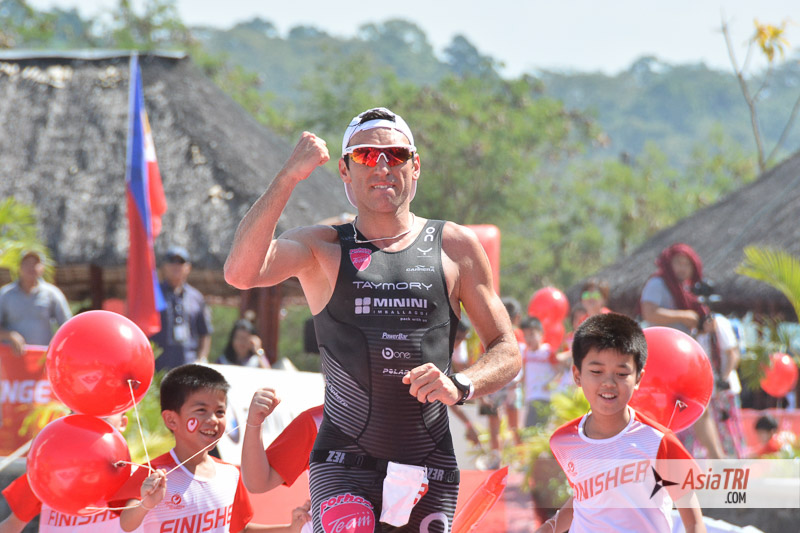 Italy’s Domenico Passuelo and Great Britain’s Emma Pooley, are the champions of the 2015 Challenge Philippines. The race was held in Subic Bay, today 21st of February. The race was held at the Half Distance which includes 1.9k swim/90k bike/21k run.

One of pre-race favorite and swim super start Rasmus Patreaus from Denmark led the swim in just below twenty five minutes, he had another 3 athletes on his feet, Brian Fleischmann from the USA, Michael Murphy from Australia and Eric Watson from Australia. The chasing pack was 3’30” back and included Domenico, Fredrik Croneborg and Mitch Robins.

On the bike Rasmus pulled away from his group and by the 40km mark he had a one minute gap on Domenico,the former professional cyclist was gaining time and at about the half way mark he took the lead from Rasmus. Brian from the USA maintained his third place until he got a flat tyre at about the 70k mark, but he was able to fix it and resume the race.

Once in the lead Domenico smashed the technical and hilly bike course and by the time the got to transition 2, he had 5’35” lead on Rasmus and another 5min on the chasing pack.

Then on the run it was a matter of maintaining their places on the podium while the big dispute was for third place. Brian struggled on the run, while Mitch Robins and Fred Croneborg, one of the fastest runners in the field moved up and were running very close to each other.

In the end, Domenico held onto the lead, Rasmus was second and Mitch opened a one minute gap to Fredrik Croneborg. USA Kelly Williamson was the first out of the water, 3’30” ahead of Katja Rabe of Germany and another 90sec ahead of Parys Edwards. Emma Pooley was six minutes back.

Once onthe bike, Emma who is a silver Olympic Medalist started to heel all of the other athletes but Parys Edwards, who took the lead at about the 30km mark from Kelly Williamson. Parys lead on the bike didn’t last long as Emma managed to pick her pace and finished the bike leg with almost 5 minutes lead on Parys.

On the run, Emma showed to the triathlon world that her move from cycling to triathlon will have a huge impact as she was flying over the 21k run course, by the 4km mark she had a 8 minute lead to Parys and another 3 minutes on Kelly.

Without too much trouble Emma cruised to the finish line to take the win, while Kelly who is one of triathlon’s fastest runner just closed the gap on Parys finishing second. Parys was third another minute back.