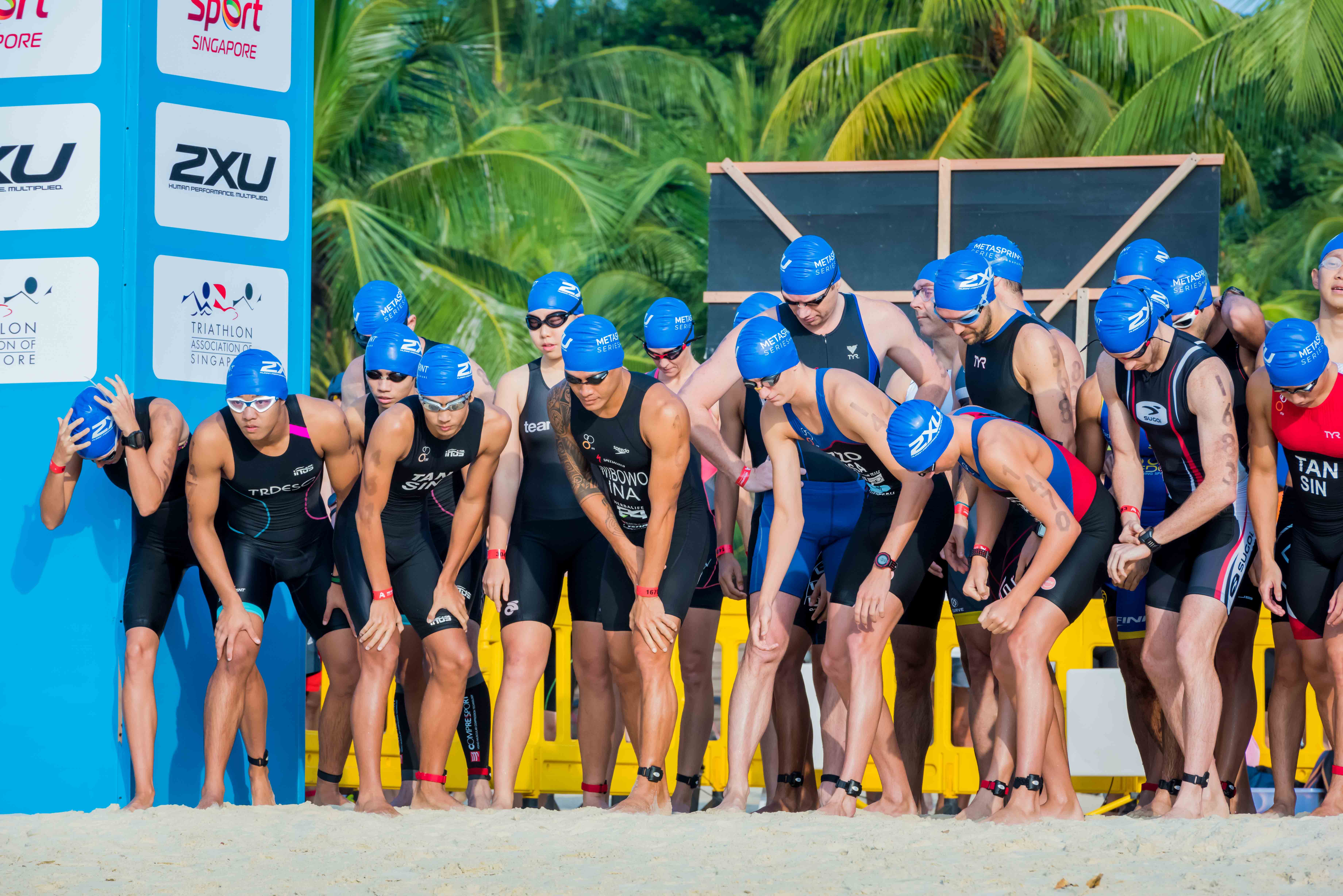 The 2015 MetaSprint Series kicked off with a bang at Singapore’s Palawan Beach on February 8 as newcomers to the winners circle Colin O’Shea and Jacquelyn Foley took the men’s and women’s titles in impressive fashion.

The men’s race especially was a cracker. When the elite wave splashed off at 8:30am, teenage American sensation Brett Izzo showed his intentions early by leading from start to finish of the 750-metre swim course. He then tore past the big crowd assembled on the beach and into T1 with a sizeable lead over the chasing packed led by the familiar names of Clement Chow and Andy Wibowo.

A lightning fast transition from Izzo saw him stretch his lead as he sped onto the 5km run course, which snaked along the southern shore of Sentosa island. O’Shea didn’t have a bad swim, but he exited the water in seventh place and hit the run course a full 30 seconds behind Izzo. The Irishman quickly got into his stride, though, and by the 1km mark had moved into second place and had Izzo well in his sights.

As the course left Palawan Beach and headed towards Tanjong Beach, O’Shea steadily ate into the gap and just before the turnaround point made the catch, which seemed to catch Izzo by surprise.

With 2km still to go, O’Shea couldn’t have been faulted if he’d opted to sit in behind Izzo for a breather, but instead he ran straight by his younger rival and quickly opened a gap of his own. Izzo didn’t give up, though, and managed to stabilise the gap at 30 metres and as the race entered the final kilometre, he started to claw back some of that deficit. But O’Shea was running with great purpose and could even afford to ease off the gas slightly as he rounded the last corner and onto the blue carpet to take the win in a time of 31:11. Izzo finished just four seconds back but behind a fascinating battle for the final podium spot was unfurling.

Chow had held third place for most of the 5km run leg but the hard-charging duo of Arnaud Selukov and Tim Cosulich had him within their sights as the race entered the last 500 metres. As he turned onto the finishing chute Chow looked like he had it in the bag but Cosulich wasn’t done yet. He unleased a killer kick and if the line had been just a few metres further the Italian would surely have triumphed, but the Singaporean held on by just two-tenths of a second.

O’Shea was a gracious winner.

“Tough swim, tough start, but the run was good. It was a nice course, very flat and I’m happy to win,” he said. “The race went to plan. I had a good transition although I had to make up a bit of time on the run. But thankfully I saw Brett up ahead the whole way and was able to pace off him and just bring it home at the end.”

With a nod to the remainder of the MetaSprint Series, O’Shea was asked if his cycling was as good as his running.

In the women’s race Foley took her title in a completely different manner, dominating from start to finish. With the elite men and women lining up together, Foley showed the crowd she meant business by exiting the water in third place, just 15 seconds behind Izzo and over a minute clear of the next women, Clare Davis of Australia.

With such a big lead there was no need for Foley to go all out, but the American didn’t show any complacency and ran strongly for the entire 5km, recording the fastest female run split in the process, as she claimed her crown with an overall time of 33:18. This was good enough for 11th place across both genders.

The race for the runners-up spot was another cracker of a contest, with Davis battling the young Singaporean Ethel Zhiyun Lin for the honours. The former had a 20-second advantage entering the run course, but Lin steadily reeled her rival in and went on to take second place seven seconds ahead of Davis.

Foley was surprised by her margin of victory.

“I expect to be first out of the swim, then have girls chasing me down on the run. I didn’t expect to have the fastest female run split of the day,” the Seattle native said.

Foley didn’t take her lead for granted and pushed hard all the way to the finish line.

“Even though I was able to see my lead on the turnarounds, I always assume someone is closing the gap,” she explained.

Turning to the rest of the series, Foley, like the men’s winner O’Shea, doesn’t think cycling is her strongest suit, but she’s confident in her abilities.

“My cycling is decent. It has to be to put together a good triathlon,” Foley said. “I don’t consider it as good as my swimming and running though.”

Of course the Aquathlon wasn’t just about the elites, some 1,500 other athletes gathered on Palawan Beach as they raced across the Sprint, Discovery, Youths and Kids categories. The firmly family focus of the MetaSprint Series meant there was still a big crowd around to watch the final races of the day, those for the Youths and Kids.

The Youths (12-15 years old) raced over a 250m-2.5km course and the male champion was Russell Liew from Malaysia, who used the second-fastest swim and an even faster transition to hit the run course first. He never looked like relinquishing that lead and indeed stretched it to finish 34 seconds ahead of the runner-up Aaron Kiss with a winning time of 15:57. Third place went to Max Luer of Malaysia.

The female Youths race had a similar story to tell with the champion Sam Mcinnes using a strong swim to give her a big lead over the eventual second and third place finishers, Emma and Louisa Middleditch out of the water. Mcinnes maintained her big gap on the run and won in a time of 17:17 with a winning margin of 30 seconds.

It should be noted that while all the girls competed together, the runner-up Emma Middleditch was in the 12-13 year-old sub category, whereas the champ Mcinnes and her older sister Louisa came from the 14-15 category.

Most of the podium placers in the 2015 Youths races have progressed through the ranks of the MetaSprint Series Kids contests, and the chances are high that the leading contenders from this year’s Kids winners will be starring for years to come too.

Open to 8-11 year olds and racing over a 150m-1.5km distance, the fastest athlete in the Kids races was Siobhain Doyle. While the boys and girls raced in separate waves and so didn’t go head to head, this in no way diminishes the fact that young Miss Doyle beat all her male counterparts on the way to claiming her crown. The runner up to Doyle was Natasha Wilson, with Perie Kenderes the third-fastest girl.

The Boys champ was Shaun Pexton who won comfortably in a wire-to-wire performance with a winning time of 10:36. Second place went to Samuel Compton with Santiago de la Flor taking third place.

The action moves on to the F1 track for the second race in the MetaSprint Series, the Duathlon, which takes place on March 15. The series concludes with the Triathlon on April 19 at Changi Beach.  The format of the MetaSprint Series sees points awarded for each race, but the final standings are based on a two-out-of-three basis, with results from the Triathlon and the Aquathlon OR Duathlon counting.

This means that the strong cyclists and/or weaker swimmers who might not have had the best race at Sentosa can’t be counted out after just one race.

Full results of the MetaSprint Series Aquathlon and details on how to enter the remaining two races in the series can be found at www.metasprintseries.com

Next Metasprint series races are:

A Beginners Guide to Triathlon Run