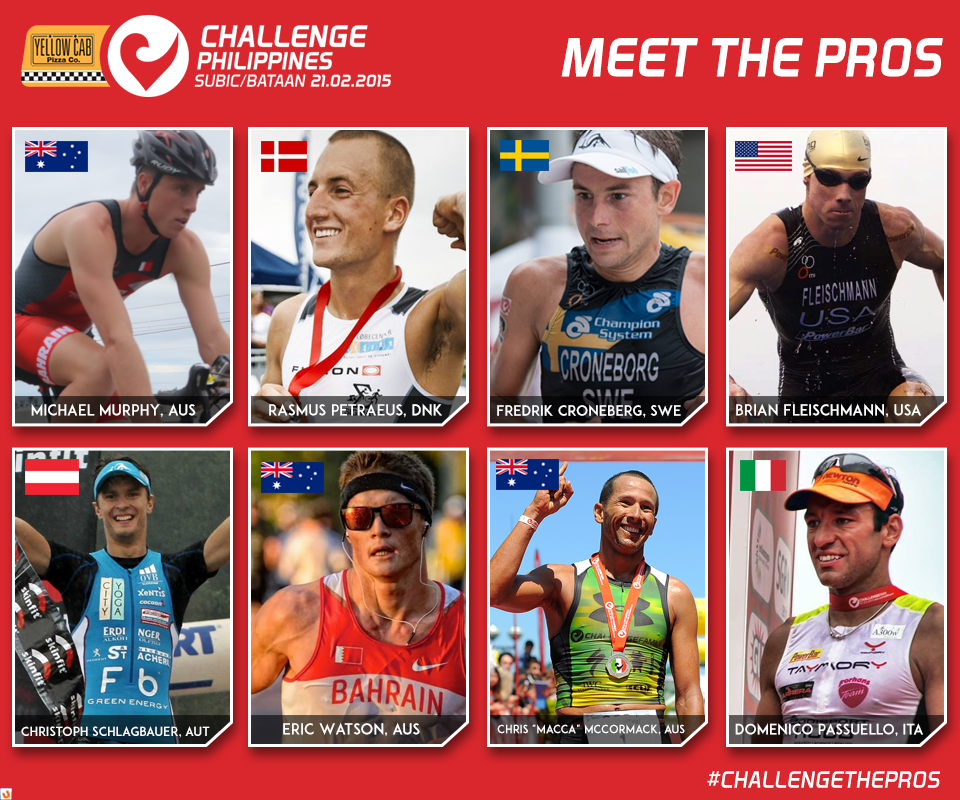 Multiple World Champion Chris “Macca” McCormack will lead a fast and competitive Pro field who will compete in the YellowCab Challenge Philippines this 21st of February 2015. The presence of Challenge Atlantic City winner Fredrik Croneborg (SWE) and the inaugural Challenge Philippines 2nd place finisher Michael Murphy (AUS) will surely ratchet up the competition. With the tough and hilly bike course, expect a charge in the hills by strong cyclists like former cycling ProDomenico Passuello (ITA). He will be playing dark horse and is coming off a great season winning 2014 Challenge Rimini and Challenge Sardinia. Completing the lineup will be Brian Fleischmann (USA), 2013 Challenge Laguna Phuket winner Rasmus Petraeus (DEN), Eric Watson (AUS) and Austrian upstart Christoph Schlagbauer (AUT), who will be racing for the first time in the Philippines.

Heading the world class women’s Pro field and racing in her first Challenge race will be Kelly Williamson, who just had an impressive 2014 season which was highlighted by her win in Ironman Texas. Lining up with Williamson will be 2014 Challenge Batemans Bay and IM 70.3 St. Croix winner Radka Vodickova (CZE), uber cyclist and Olympic medalist Emma Poole y (GBR), who placed 3rd in last year’s event. Likely to surprise will be Parys Edwards (GBR), who was winner in 2013 ITU World Championships in London. Rounding out the list are hometown favourite Monica Torres (PHI), Carole Fuchs (THA), Katja Rabe (DEU), European campaigner Louise Rundqvist (SWE) and Stef Puszka (AUS). “Many of the world’s best have claimed that Challenge Philippines Subic-Bataan is the Toughest Half Distance Race in Asia! No doubt this old school course will put you to the test, but it is also achievable and breathtakingly beautiful. Bataan provides a setting that the world would want to see. It’s a race that will celebrate hard work and it does provide bragging rights for a lifetime!” added Dave Voth, Leverage Sports Asia CEO and Chairman of Challenge Philippines Subic-Bataan.

With the most prestigious and fastest Pro field assembled in Southeast Asia, the 2015 Challenge Philippines Subic-Bataan is a race to look forward to. Spectators are encourage to join in all of the festivites and there will be special new cheering stations along the course. The post race Awards Party, at Lighthouse Resort in Subic and open for all, will be Epic with top entertainment, Pinoy food and celebrities in attendance. This world class season opener for long  distance racing in the Philippines will be held in Camayan Beach Resort, Subic Bay and the rugged and beautiful province of Bataan on 21 st of February.