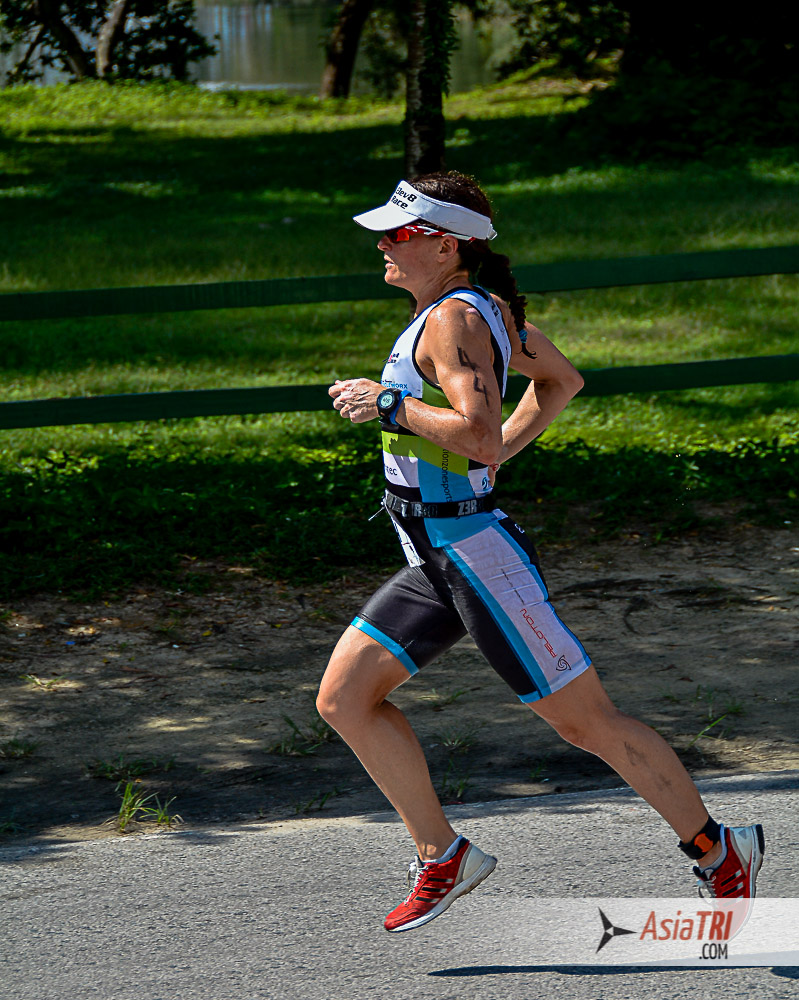 While relatively new to the sport and on her first season as a professional triathlon, Parys Edwards proved at the 2014 Laguna Tri-Fest on November 23rd and 30th, that she has the legs to race against the best in the world.

She won Laguna Phuket Triathlon beating triathlon legend Belinda Granger, and was second at the Challenge Laguna Phuket a week later, only behind three time world champion at the distance, Melissa Hauschildt, finishing ahead of multiple Ironman 70.3 winner Radka Vodickova.

AsiaTRI caught up with Parys to chat about both races and the plans for the future.

1) Can you tell us about your background in the sport? What are your best results?

I grew up on a stud farm in Zimbabwe and for much of my childhood I rode horses as well as doing any and every sport that I could. I loved athletics and Cross Country running. However my main sport was (field) hockey, and I focused solely on this from the age of 18 and went on to represent Zimbabwe and then South Africa. It was hockey that brought me to the UK in 2001 when I signed with Premiership team Leicester. I was planning to play for one season. 6 years later I decided I needed a break from the game and moved to London in 2007.

My flat-mate at the time was part of a triclub called Ful-on Tri and I went along as a means of keeping fit – I was hooked from the start. Right from the beginning I had some promising results and qualified for the world champs in my 4th ever race and finished 9th in AG in those Champs in Vancouver in 2008. I struggled with ankle injuries (a legacy from my hockey days) which disrupted my racing for 2 years, but following surgery in 2010 I never looked back and I won most of the races I entered and went on to win the British Champs, European Champs and 70.3 World Champs in Las Vegas in 2012.

The following year I was the overall fastest AGer at the Olympic distance word champs in London and this prompted me to make a decision – retire from the sport or step up to the professional ranks. My swim is a big weakness for me so I knew I would have to race the 70.3 distance or longer if I was to race Pro. I was very fortunate to secure enough sponsorship to be able to stop full-time work and from April 2014 I worked 2 days a week (as a sports physio) to allow me to train and race in the Elite category. My best (and most special result of 2014 is winning LPT- what a great race and a real privilege to be on that winners roster!

2) You had an amazing weekend at the Challenge Phuket Tri-Fest with a win at LPT and 2nd at CLP to a multiple time world Champion at the distance. How did the races unfold for you?

Laguna Phuket Triathlon – I felt so relaxed before the race, and genuinely couldn’t wait to race the shorter distance that I much prefer over the longer courses. My strategy was to try minimize the deficit in the swim, then go all out on the bike (especially the Niathon hills) and go hard from the start of the run and hope to be able to hold the pace.

The race unfolded almost to plan – I was very disappointed with my swim after drifting far to the left of the buoys in the sea and giving myself some extra distance. However I set to work on the bike and could not have pushed harder (with a normalised power of 240watts for the course). I felt good starting the run and was holding about 3:45min/km pace and was absolutely delighted to catch up with Belinda and Katja by the 4km mark. Now I found myself in the dream position at the front but it wouldn’t sink in as I was hurting and knew that the wheels could still come off.

Thankfully I cope well racing in heat , and I had some fantastic support from the Phuket locals I have met before the race and I was able to extend my lead and win – what a feeling to lift the tape and cross the line with Kandi the baby elephant!

Challenge Laguna Phuket – The race plan here was fairly similar – try correct my mistakes from the first swim to keep the deficit under 7 minutes if possible, work very hard on the bike to make back time, then go steady on the first lap of the run and give it everything I had left for the second lap.

I was pleased to swim straight this time (and the faster swimmers all went off course to the right!), but still I had about 7 minutes deficit as I struggled in the laguna with 2 swimmers on my legs and disrupting my rhythm. I got on the bike and pushed as hard as I could from the start. My power meter was not working so I couldn’t keep an eye on my effort and just had to go on feel. I felt strong on the Mission hills and was constantly passing other pro’s. I made a conscious effort to drink and eat lots (I had 3 caffeine gels and some homemade protein bar on the bike) as well as electrolytes, carbohydrate drink and water from every aid station. I caught Belinda and Radka on the last of the Niathon hills to move into 2nd place and had to dig very deep to keep the effort up. I knew the last 10k of the bike was flat and used this to let the legs recover, but they were very shaky when I got off the bike and I wasn’t sure if I had done too much.

I now decided I needed to go hard on the first lap of the run to try an extend my lead on Radka ( I knew she didn’t like the heat and would have Bahrain at the back of her mind and might not chase as hard if the lead grew), it was a risk and my times faded noticeably on the second lap but it paid off as I held onto second place to my sheer delight!

3) What are the next goals for you? Are we seeing you in Asia anytime soon?

I will most certainly be back in Asia – I thrive in the heat and also love hilly challenging courses which seem in abundance in Asia! I even prefer the food there to in Europe so its for certain I’ll be back. I meet with my coach this week to look at the calendar for next year – but I will be in SA for January and will look to race the SA70.3 if I am fit, and then possibly head to the Philippines in February for the challenge race. 4) Which is your favorite training session on each discipline and why?

This discipline has grown on me over the course of the last year as I have been getting in the water 6x/week if I can and that’s helped improve my feel for the water, but its still my least favourite of the 3. I enjoy the sets that include the swim toys and focus on the strength element rather then the interval sets where its me against the clock. A favourite set would be:

1k warm up- swim, drills and work with fins

I never need an excuse to get out on the bike. To be honest my favourite session is a long bike ride that includes as many hills as possible- I especially enjoyed riding the CPT course, another favourite is the Majorca 70.3 course which includes the Lluc climb. When in London I head to the Surrey hills and always enjoy a coffee stop at Boxhill Café J

I love hill reps as they are tough but I also enjoy interval work as its so measurable for example:

I tend to avoid running too high a volume as I am injury prone so I focus more on shorter, harder intervals or hill reps and this has worked for me!

Five types of Volunteers You're Likely to Find at a Triathlon