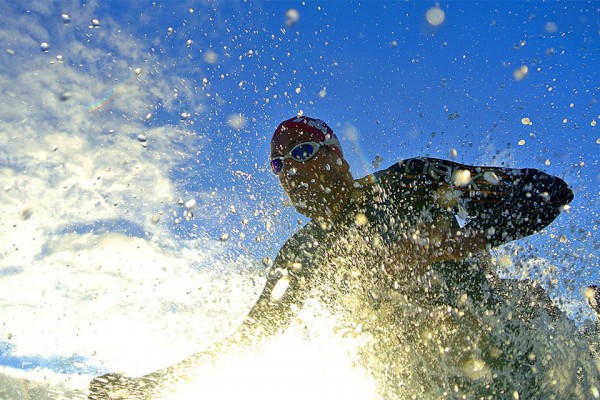 Frenchman Denis Chevrot and german born but racing for New Zealand, Britta Martin won this past Sunday the Ironman Western Austrália, in Busselton. The last race of the Ironman 2014 season saw Chevrot dominating the men’s race. On the women’s side, Martin broke the course record and broke the 9 hour mark, in 8:56:33.

While both athletes aren’t well known to the general public, they results in the past years are a proof that their wins weren’t a surprise.  Chevrot was 5th place at Ironman Port Mcquairie and 2nd at the Ironman 70.3 Putrajaya bot races in 2014, he was also 4th at the prestigious Ironman Arizona in 2013. Yesterday he showed a great strength across all three disciplines, swimming 3.800m in 00:46:23; riding 180km in 4:26:42; and ran the marathon in an incredible 2:49:11, with a finish time of 8:05:08, six minutes ahead of second place, Swedish Patrik Nilsson.

Britta Martin, who won this race in 2012, started the run with a big deficit to german Mareen Hufe. With a strong run she took the lead on the 31k mark and held onto the win with a marathon split of 3 hours which gave her the new course record. It was Martin’s third win this year, her other wins were Challenge Taiwan and Ironman Wisconsin.

The 2015 season starts with Ironman 70.3 Pucón, in Chile, with photo coverage from AsiaTRI.