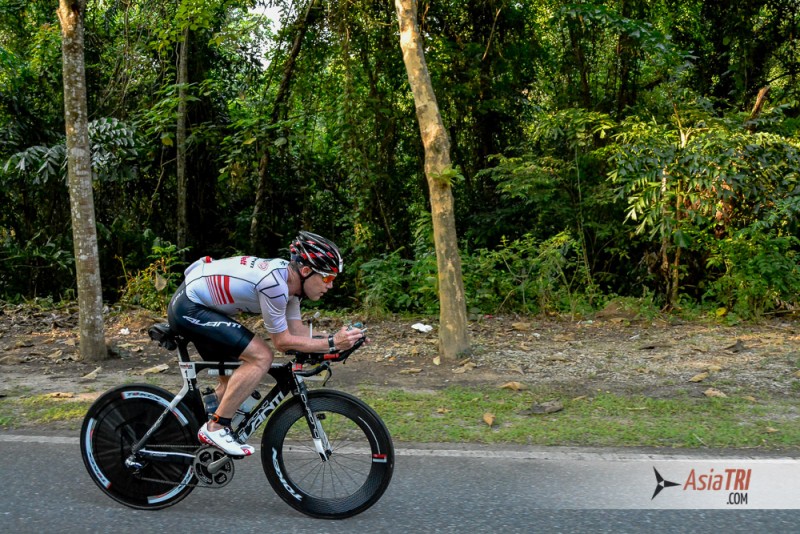 Regardless if you are based in Asia or been doing this sport for twenty years, you will likely have seen Cameron Brown’s name on the top of many results. ‘Brownie’ is a ten time Ironman New Zealand Champion and has placed 2nd place, twice, at the Ironman World Championships in Kona, Hawaii
In the 2014 season, 42yo Cameron Brown secured several wins in Asia and also managed to win Ironman Cairs. AsiaTRI caught up with him to learn more about this amazing athlete AsiaTRI: You’ve won several events in the Asia Pacific region this year, including Metaman in Bintain (Indonesia), Desaru Half, Ironman Cairns and you are coming off a win at Ironman 70.3 Taiwan this past weekend. We would love to see you defending your titles next year. How’s your calendar for the upcoming season shaping up? Do you plan to do any of the new races in Asia and defend your titles?
Cameron Brown: 2014 has been a great year, one of my best and even better doing it as a 42year old. Yes I hope to be defending all my titles next year along with a few other races on my schedule. At the moment I will be racing the Asia-Pacific 70.3 champs in Auckland in January, Ironman New Zealand, Ironman Taiwan, Ironman Cairns, Ironman Malaysia and Ironman 70.3 Taiwan again. It’s going to be a busy year so hopefully I can survive 2015 and get back on the podium.
AT: You were appointed as the Ironman Ambassador for Asia Pacific. With so many years of racing experience in this region, we would like to hear what are the main changes you are seeing in the long course triathlon scene in Asia. What attracts you to the races in this region, what is special here and also where do you see the triathlon scene in asia heading to.
CB: The main changes I’m seeing is the growth in these races, when I first started racing at Ironman 70.3 Philippines the race attracted 500 athletes, now it’s topping 2500 athletes and has a waiting list! Taiwan is really growing and it will be fantastic to be racing there first ever Ironman in April next year.
I spent 7 years racing in Japan in my junior days from 18yrs old until I was 26yrs old, I love Japanese and Asian food and always have such a great time at these events. I also love travelling to new places and my new role as the Asia Pacific ambassador allows me to see some amazing new countries I have never visited. AT: At age of 42, you’ve been doing this for more than twenty years at the very top with no signs of slowing down. You are not only an inspiration for the young pros but also for the age groupers. What are the attributes that allows you to train and race at such a high level for so many years?
CB: I  have such a love and passion for this sport, I have always loved my training as well and it helps when you live in New Zealand, we have some fantastic training grounds and some of the best trail running in the world, I think this has helped me over the years as I’ve tried to stay off the hard impact of road running and stuck to as much off road running I can do.
I also  tried to always have small breaks throughout my career, after every big race I would have 2-4 weeks off to let my body recover. Two years ago I took 8 weeks off as I was a little burnt out mentally and physically and this was a huge help as I got rid of some niggling injuries that had been around for a while(Plantar fasciitis) and it also helped get my passion back to train hard again. Hopefully I have a few more years left being a professional athlete, it’s been a dream job and has let me travel the world
See also:  Ironman Wrap-up: Ironman Boulder, Ironman 70.3 Switzerland, Ironman 70.3 Stafforshire and Ironman 70.3 Eagleman
Follow us