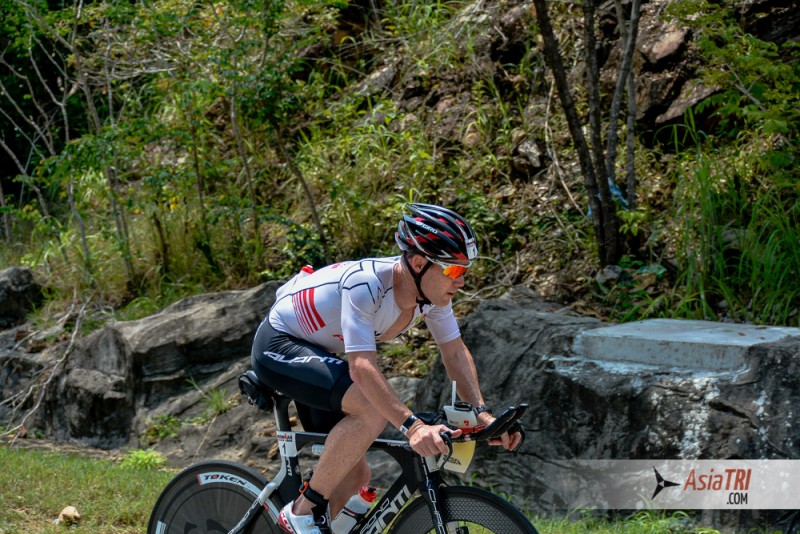 Ten Time Ironman New Zealand Champion, Kiwi Cameron Brown added another win on his 2014 results list this Sunday November 2nd which includes wins at Ironman Cairns and Bintain’s iron distance triathlon Metaman.  The day started with Troyen Jonathan from France leading the swim in 28:11 followed shortly by a pack of another five athletes, including Brown,  twenty seconds back.

Troeyen saw on his gap an opportunity to extend the lead and put the hammer down on the bike with the day’s best bike split of 2:09:39, reaching transition two more than four minutes ahead of the chasing pack that included Brown, Marais, Fredrik Croneborg from Sweden and Guy Crowford from New Zealand.

Out on the run, Troyen felt his agressive and solo effort onto the bike and faded to a 5th place with a run split of 1:39:46. In what was a very slow day across all three disciplines, Brown managed a day best run split in 1:19:58 to take home another Ironman 70.3 title.  South African Stuart Marais was less than a minute back in second place and Fredrik Croneborg who was the defending champion, finished the event in 3rd place.

The ladies race saw a dominant performance of multiple Ironman Champion Dede Griesbauer from the USA. With a 29:59 swim, Dede was almost two minutes ahead of Kate Bevilaqua. Onto the bike, Dede posted the day’s best split in 2:24:34 which was more than eight minutes faster than the second best bike split from Dimity-Lee Duke from Australia, who managed to catch Kate on the bike and both arrived at Transition two together.

With a lead of more than ten minutes starting the run to the Duke and Bevilaqua duo, Dede ran a solid 1:35:36 to secure another win in her career. Dimity-Lee Duke ran a day’s best half marathon in 1:30:31 for a second place, and Kate Bevilaqua held onto the podium.