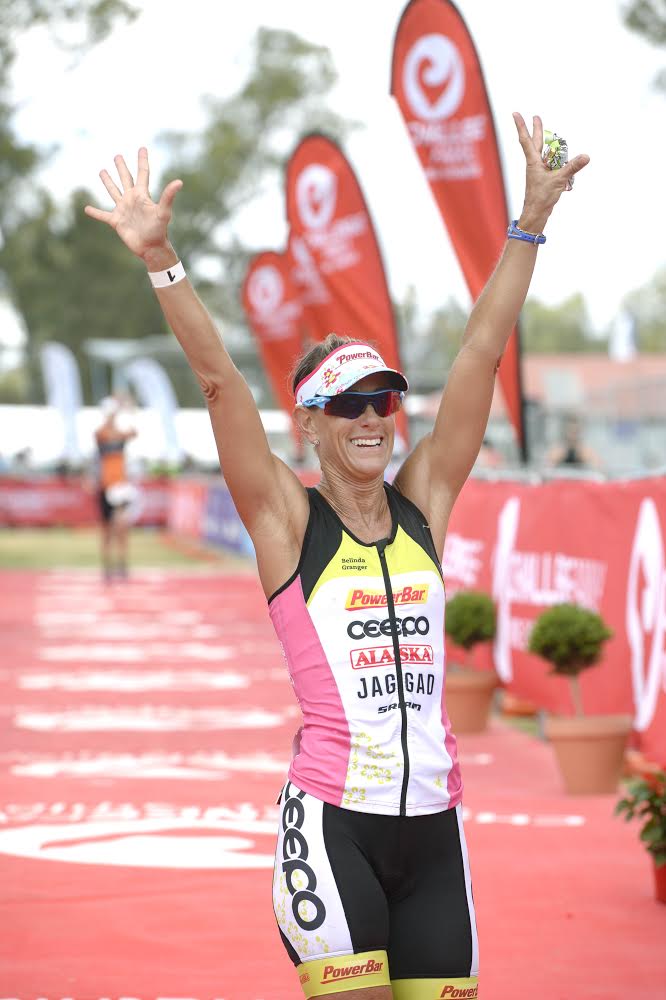 A wet start to the day turned into a perfect one for Amberger, leading from the gun and beating a class field. Brad Kahlefeldt ran himself into second with a remarkable 1:10 run split with Ruedi Wild securing the final podium spot.

Luxford and Radka Vodickova had a battle royale all day until Luxford put the pressure on in the run to grab her second win in two weeks. Shelly Wu finished third just edging out the lady of the moment Belinda Granger in her final professional race in Australia.

“It feels amazing to come back here and win, I was second here last year. To come out with a race like that is just unbelievable,” said Amberger.

“It was a challenging day with the weather but the organizers put together a fantastic course,” said Luxford.

Amberger got the early break on the field with a minute plus lead after the swim from a group of seven that contained all the big names Leon Griffin, Kahlefeldt, Ruedi Wild, Tim Van Berkel.

“I went from the gun today, I knew I was the strongest swimmer in the field so I wanted to capitalize on that,” said Amberger.

Despite the rain soaked roads Amberger held nothing back laying down the hammer and pushing his lead out at every check-point from Griffin over five minutes behind after 75km. Kahlefeldt was holding down fourth with Wild still in touch but giving Amberger a 6min 30sec head start.

Berkel was the first casualty in the cold conditions, withdrawing after the first lap of the bike.

“I made some adjustments to my bike during the week and I saw the benefits of that today it was probably my best ride of the year,” said Amberger.

At the changeover Amberger had banked a massive 9min lead that proved a winning one in the end. Kahlefeldt produced a great run to reduce the margin to 3mins but had to settle for second today.

“I knew I was riding strong, the conditions were really tough out there today, everyone is struggling but I think those are the conditions where I thrive,” said Amberger.

Vodickova and Luxford emerged from the swim together; the pair remained within legal distance for the entire bike leg occasionally swapping the lead.

“I didn’t really push the bike, Radka and I were pretty cold, to be honest we just wanted to get it done,” said Luxford.

Granger was nicely placed in third but had lost time to the leaders now 5mins behind but digging deep in her last race in Australia, but Wu was staying in touch holding down fourth.

At the end of the bike it was going to come down to a foot race between Luxford and Vodickova both very credentialed runners and they didn’t disappoint.

The battle behind for third was heating up and Wu was running down Granger who was desperate to grab a podium in her last outing.

Luxford was the first to make a break with Vodickova unable to respond, Luxford winning by 8mins in the end.

“I went out at my own pace got comfortable and couldn’t control what Radka did today could only worry about what I could do and it paid off,” said Luxford.

It wasn’t the fairy tale finish Granger had hoped for but the sentimental favourite delivered the best she had and one she will long remember.

“She (Wu) went by me so quick I could go with her, I’ve beaten her a few times this year but she got me back on the one that counted.

“The first two laps it was pretty tight but on the third when I knew I couldn’t get third I just enjoyed it,” said Granger.

When asked how the emotions played with her today she was focused from the start because of the difficult conditions and knowing she had a job to do but acknowledges it will be different later today.

“I’m fine with it but I know when I’m driving back this afternoon in the car and with your own thoughts it will hit me but I’ve got a party to go to tonight so that’ll snap me out of it,” said Granger.

Asian Beach Games, to be held on November 17th in Phuket, meet the favorites