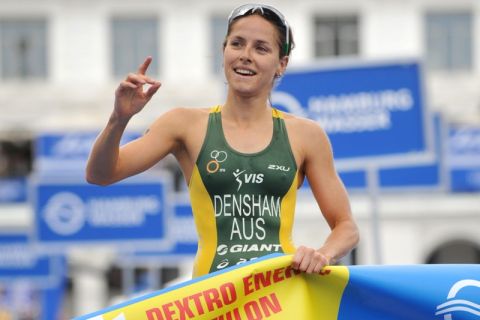 Challenge Bahrain has attracted the greatest line up of world-class athletes ever seen over the half distance. This includes three of the best women on the ITU circuit – Jodie Stimpson (GBR), Erin Densham (AUS) and Nicky Samuels (NZ), all making their long course debut at Challenge Bahrain on December 6.

Dual Commonwealth Games champion Jodie Stimpson (GBR) will be lining up for her first taste of long distance racing. Stimpson has been one of the standouts in the World Triathlon Series this season, claiming wins in Auckland and Cape Town and finishing 4th on the ITU world rankings.

“I am really excited about it and extremely nervous as well, but will be a fun challenge,” said Stimpson.

Stimpson is just returning to training after an end of season break and says she expects to be sitting on her bike a lot longer in her preparation.

“This is amazing, to have such stacked fields both from ITU and longer distance athletes.

“I have such respect for the longer distance girls as well, so will be fantastic to be on the start line with them,” said Stimpson.

Olympic bronze medallist Densham has been sidelined for the best part of 18 months from any serious racing. 2012 took toll – the exhaustion, physically and mentally of fighting her way onto the Olympic team, bittersweet taste of bronze in London, and the Olympic hangover that descends.

But the 28-year-old is a fighter and after an extended break from training and racing she has battled her way back. She recently returned to racing, finishing second at a sprint race in Las Vegas.

See also:  Ironman Performance - The mix and pacing in training

“The longest race I have ever done before is an Xterra that took roughly three hours. I think I am completely crazy for signing up for this but I can really use this time to get some good base work in for 2015. I’ve got nothing to lose,” said Densham.

Densham admits she has some work to do between now and then to be race ready.

“I will definitely have to up the K’s and do more specific work. I have probably done a total of 3 hours on my TT bike – ever. That’s not really ideal and I need to up the K’s on the run department.

“There is so much I need to do/learn in quite a short period of time and it’s going to come around so fast,” said Densham.

Densham has never been one to shy away from a different challenge but says she is also scared out of her wits.

“I am looking forward to the challenge of trying something different and completely out of my comfort zone. I’m also totally freaked out to be quite honest. The distance, the competition, the unknown.

“But in light if all that, I have never been to Bahrain and I’m really looking forward to being able to experience a new part of the world and a new culture,” said Densham.

Samuels is one of New Zealand’s best, having represented at the London Olympics she is the current Xterra World Champion, and produced some of her best career results in 2014.

Despite a disappointing race at the Commonwealth Games, Samuels quickly turned it around into positive results that delivered her a bronze medal at the World Triathlon Championships in Edmonton and saw her finish 5th in the ITU world rankings.

Having travelled the world as a professional athlete this will be her first trip to the Middle East.

“I’ve never been to Dubai let alone Bahrain so it will be exciting to go there, although a long way from NZ it will be worth the big trip.

“The race course sounds amazing, I can’t wait to be apart of it,” said Samuels.

Samuels is looking forward to the challenge of racing against the seasoned long distance women and already laying down the challenge.

“It’s great when all the different distance triathletes can be tested together.

“Obviously people in the habit of doing halves are going to be better prepared but I’m sure the likes of myself and Jodie won’t back down easily,” said Samuels.

Challenge Bahrain has strong focus on encouraging new participation and excellence in triathlon while creating an opportunity for professional athletes with its US$500,000 prize purse, the largest in the world over the 1.9km/90km/21km distance. The point-to-point course is designed to take athletes on a journey through Bahrain’s history, from the high tech future to the roots of this ancient civilisation dating back 4,000 years.