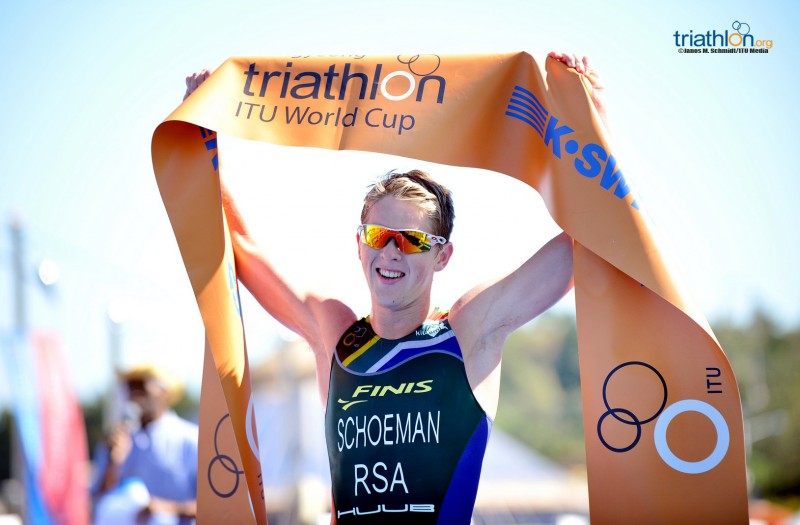 Schoeman began the race with an impressive swim posting the fastest time of the day with 16:19. A pack of five broke away early on the bike containing all three medallists, pulling further and further away from the rest of the field.

“It’s unbelievable. I feel so great. It’s fantastic. We started off really well, working well together (on the bike). We kept it smooth. We were all working for the same thing – a breakaway. It was really encouraging – every lap we could see we were just gaining 20 seconds at a time. It was really encouraging and it pushed us even harder.
“It played into our hands, it made me run a little more comfortable, not exerting myself too much,” said Schoeman.

Schoeman and Zaferes led the way on the run, until a big push in the final stages saw Kanute pull back for the silver. But there was no mistaking that today the gold was for Schoeman.

“I was feeling great the whole run. On the last lap when I looked over and I had a huge gap, that’s the best feeling in the world because then you can win comfortable,” said Schoeman.

The large men’s field of 73 athletes began the two lap swim in glorious conditions for a non-wetsuit swim. Zaferes, Schoeman and Anthony Pujades (FRA) were the first to emerge from the water on the first lap with Kanute and Wesley Matos (BRA) close behind.

Jumping onto the bike first was Pujades, Zaferes and Kanute. A couple of seconds separated them between Schoeman and Tayama with Peter Denteneer (BEL) and Alexander Bryukhankov (RUS) close behind and a further couple of seconds until the main field.

On the first lap of the bike Bryukhankov had to withdraw with a puncture leaving the field without the number one bib.

With Bryukhankov out and Denteneer dropping off the pace, the first lap of the bike saw the leading five containing Pujades, Zaferes, Kanute, Schoeman and Tayama push ahead by a full minute on the chasing pack.

By the second lap, the leading five had put one and a half minutes daylight to the giant chase pack of 52 including David Hauss (FRA) and Joe Maloy (USA). The leaders continued to work together steaming ahead with a lead of two and a half minutes by the time they reached T2.

On the first lap of the run Zaferes, Schoeman and Kanute were running head to head. Pujades fell off by just over ten seconds with Tayama also dropping almost a minute off the pace. By lap two Zaferes and Schoeman had gone out ahead leaving Kanute 10 seconds behind.

With Pujades still holding fourth, Hauss and Vicente Hernandez (ESP) were beginning to close down the large deficit, now just a minute and a half to Pujades.

On the third lap Schoeman made his move on Zaferes gaining ten seconds by the end of the lap with a further ten seconds to Kanute. Schoeman maintained his lead throughout the final lap, but the battle for silver and bronze was not over between Zaferes and Kanute.

With Zaferes in sight, Kanute put his head down for one final surge overtaking his fellow countryman and finally taking silver by a convincing six seconds over Zaferes who claimed the bronze.

Kanute came sixth in the Under23 ITU World Triathlon Grand Final Edmonton this year, but silver in Tongyeong is his best result to date.

“It couldn’t have worked out any better (the bike breakaway). We were working like we were on a team trial. We ended up putting a huge gap on the field, so it was good.

“It was the exact opposite on the run. I could see them coming the whole time and I was getting a little nervous there towards the end.
My stomach was starting to cramp a little. I was trying to run my own race and stay within myself enough so that I could close it. I ended up being able to put in some good efforts on the uphill and relax a little on the downhill.

It was a strange year up and down all year, and it’s great to end it on a note like this,” said Kanute.

Zaferes was more than satisfied with his bronze medal and happy to be fighting fit.

“That couldn’t have been any more perfect. We worked together on the swim. Then on the first two kilometers of the bike we absolutely hammered it. The five of us were together. We had Bryukhankov, but he got a flat. We were trying to decide if we should wait for a few more people and decided to just go. Team time trial the entire time, nobody missed a pull, it was 1:20, 1:40, then two minutes.

“At PATCO champs I ended up having a heat stroke and two seizures and was in the hospital five days. They were surprised I was even alive, so I’m happy to be alive, happy to be training again. Joel Filliol, my coach, has brought me back and been encouraging the whole time. I couldn’t have done it without him,” said Zaferes. Emma Jackson (AUS) stormed to victory to defend her 2013 title at the 2014 Tongyeong ITU Triathlon World Cup. The Australian held on her own on the bike, before a final fight for the line secured her second Tongyeong World Cup title.

The podium places were decided early in the run with Jackson running alongside Japan’s Ai Ueda and Maaike Caelers from the Netherlands. A final push on the last incline meant it was a race to the line for Jackson and Ueda. Jackson dug deep in the finishing chute to secure her second ITU World Cup gold.

“I’m very happy about that race, my aim was to come here and defend my title and it was a lot tougher than last year. It was a great finish with Ai Ueda, so she made it very tough for me, so did Maaike,” said Jackson.

Jackson was in 23rd position exiting T2, but calmly made her way to lead the run.

“I tried to get a bit closer to the front, but got swamped about a couple of ‘K’ out of transition so I didn’t give myself the best start. I just wanted to build into it and didn’t want to fade too much towards the end,” said Jackson.

With Jackson, Ueda and Caelers together all the way on the run, it was all down to the strongest finisher.

“I did try to attack a couple of times, but they stayed with me and Ai Ueda attacked up the last hill and I just tried to stay as close to her as possible and sprint past her towards the end.

“I’ve had a few sprint finishes for medals before. Surprisingly I’m not too good at sprinting in training but at the end of a race I’m alright so I guess that’s the main thing,” said Jackson.

A total of 49 swimmers started with the two lap swim in 19.7°C ocean water. Italy’s Gaia Peron was first out of the water closely followed by Mateja Simic from Slovenia and Hungary’s Margit Vanek. The bulk of the field was just behind, but after the fastest swim of the day and a speedy transition, it was Peron who was first onto the bike.

At the end of lap one on the bike, a group of eight had formed containing Peron, the six fastest out of the water and Russia’s Alexandra Razarenova, who had powered round to join the leaders. A tight group of seven riders, including Jackson and Vendula Frintova (CZE) were just five seconds behind with the majority of the women 30 seconds behind them.

The small gap wasn’t enough to give the leaders sufficient drive and by the end of the second lap, the two groups had come together for a 15 woman group. In the meantime, the big pack pulled up to close the gap to just 10 seconds with Caelers and Ueda in amongst it.

It was all change again in the third lap as the main field caught up to the 15 leaders to form 34 riders led by Vanek entering the fourth and final lap. A small chase group had also made headway, with Felicity Sheedy-Ryan (AUS) at the helm a minute behind.

Ueda had positioned herself well among the riders and was first to exit T2 with Gillian Backhouse (AUS), Caelers, Simic and Kretz right up there. Within 20 seconds all 34 athletes had left transition, with Jackson in 23rd leaving it all down to the run.

The runners quickly positioned themselves in the first lap with Caelers just a couple of seconds ahead of Ueda and Jackson. Ten seconds behind Razarenova was running together with Frintova and Zsofia Kovacs (HUN).

By lap two Razarenova was out alone, 10 seconds ahead of her nearest challengers, but now almost half a minute down on the three leading ladies of Caelers, Ueda and Jackson.

The mostly flat run course contained 120m of testing hills which would prove to be the deciding element as Ueda made a final push on the last hill section. Jackson rose to the challenge and it was a sprint to the line with the Australian taking home her second consecutive Tongyeong World Cup title.

The silver medal for Ueda comes after she won the 2014 Incheon Asian Games at the beginning of this month.

”I am happy with the second place, but on the final lap I tried to escape uphill, but Emma caught me. The run was really good, running together with Emma and Caelers side by side.

“Next week we have the National Championships in Japan so this was a good race for me,” said Ueda.

Caelers could not hold on to Jackson and Ueda and finished to take the bronze, her second medal in a row after taking gold at the Alanya World Cup last month.

“The bike was hard, it was really hard. A few girls just powered off to chase the gap, but you’re already chasing. It worked out well and in the end we got in the middle of the bike – we were catching up to the front group and that was good, but that was hard.”

“I went off to fast on the run. I mean I’m not often in this position so I had to learn to race well strategy wise. I was trying to get away but I didn’t and Emma and Ai Ueda were so strong and on the last hill I suffered really hard.

“After a long year I had some troubles, so I’m really pleased with two podiums at the end of the season and it’s a good build up for the next season and I feel a bit comfortable. I’ll first have a little holiday and then get back into training so I’m looking forward to some time off now,” said Caelers. Images from the run portion in Kona